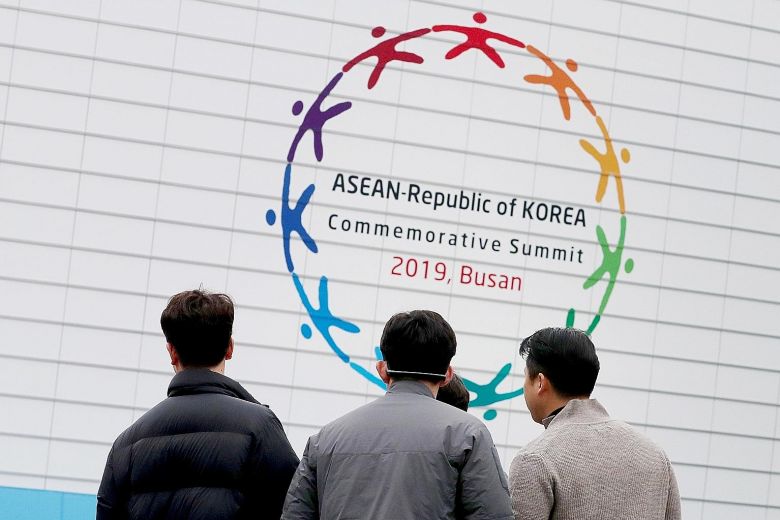 Afternoon sessions for the KOR-ASIA Forum 2019, held Friday at the Shilla Seoul, were divided into two themes, with the first session focusing on "Toward Cooperation-based Economic Community" and the second on "Korea-ASEAN, Becoming Strategic Partners through Friendship."

"The core idea of the concept of future South Korea-ASEAN community is to pursue co-prosperity," Yoon said. "South Korea understands that it cannot win the hearts of ASEAN countries by simply building manufacturing systems in the region or expanding commodity trade with them and accordingly has come up with such a concept of co-prosperity and mutual interest."

The Ministry of Trade, Industry and Energy’s strategic goals to facilitate cooperation between South Korea and ASEAN countries include expanding free trade agreement (FTA) networks such as the Regional Comprehensive Economic Partnership (RCEP), a mega-FTA where South Korea is taking part for its first time in such a massive economic framework, facilitating industrial technology cooperation with ASEAN member nations and building a coordination center for businesses in the region.

The government is also promoting bilateral FTAs with countries like the Philippines and Malaysia, following a Comprehensive Economic Partnership Agreement (CEPA) between South Korea and Indonesia concluded in October, as well as the multilateral RCEP set to be finalized next year.

The panelists noted that while there have been many agreements among ASEAN countries on economic cooperation, such frameworks should be implemented and utilized with higher level of efficiency, while the countries in the region should also shift the focus of regional cooperation from the current government level to the community level, to engage more people from the private sector and make such cooperation more sustainable.

Ambassador Lim highlighted the growing importance of the partnership between South Korea and ASEAN in keeping the regional security, beyond the exchanges of people and pursuit of mutual economic prosperity.

"The issue of peace on the Korean Peninsula is always on the agenda at ASEAN-level meetings," Lim said, noting that the two summits between the U.S. and North Korea were in Singapore and Hanoi in the region. "The South Korean government has reiterated its stance that many issues on the Korean Peninsula should be solved through dialogue which has gained full support from the ASEAN countries."

Lim said the framework of ASEAN and its partner countries including South Korea and other Northeast Asia countries is the only multilateral regional security framework after the Six-Party Talks which started in August 2003 and have been suspended since December 2008. He said such a strategic community for multilateralism is needed by the countries in the region when they are under an unsettling security environment where the world powers are pursuing unilateralism.