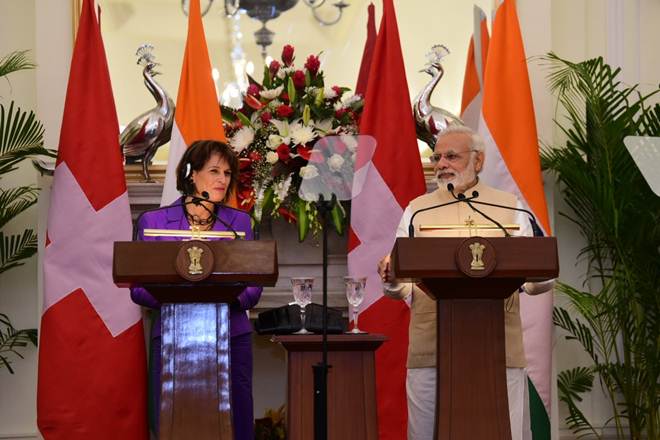 Negotiations on a bilateral investment protection pact will figure prominently during Prime Minister Narendra Modi’s meeting with Switzerland’s President Alain Berset in Davos next week, the Swiss government has said.

The two leaders will also discuss, among other trade and business matter, the envisaged free trade agreement between India and the European Free Trade Association (EFTA), of which Switzerland is a member.

The Swiss government statement on topics for the meeting of the two leaders did not mention black money, an issue which has been central to most of the high-level deliberations between the two countries.

India has framed a model Bilateral Investment Protection Agreement (BIPA) and is now negotiating it with several countries. Besides, the talks have been going on for a long time for a free trade agreement between India and the four- member EFTA ((Switzerland, Norway, Iceland and Liechtenstein).

The trade pact talks had started in October 2008 and several rounds of negotiations have taken place since then. The proposed agreement covers trade in goods and services, investments, trade facilitation, customs cooperation, protection of intellectual property and public procurement.

Under an FTA, trading partners give market access to each other with a view to promoting bilateral trade in goods and services, besides investments.

"Topics on the agenda of the working meeting (of President Berset) with Indian Prime Minister Modi on Monday include business and trade matters, particularly the ongoing negotiations on a BIPA and the envisaged free trade agreement between the EFTA and India," the Swiss government said.

Federal Councillor Johann Schneider-Ammann, also the head of the Federal Department of Economic Affairs, Education and Research, will also be attending the talks with the Indian prime minister, the Swiss government statement added.

Modi, accompanied by six union ministers, will be in Davos on January 22-23 to attend the World Economic Forum’s Annual Meeting, where he will give the opening plenary. On the sidelines of the high-profile event, Modi will hold a number of important bilateral meetings with various world leaders.

Ammann will also meet India’s Trade and Industry Minister Suresh Prabhu and will host the traditional informal WTO ministerial meeting on the sidelines of the WEF summit.

The Swiss government said Ammann will focus on fostering bilateral economic relations and free trade negotiations in his various meetings.

The five Federal Council members will be attending the Davos event this year and will hold around 60 bilateral meetings on the sidelines during the five-day summit starting January 22.

At the invitation of President Berset, European ministers of culture will gather in Davos prior to the WEF summit for a conference on ’Baukultur’ — a term used for preservation and development of high-quality cultural heritage.

The results of the conference will be documented in a ’Davos Declaration’ on January 22 to launch the European Year of Cultural Heritage 2018. Federal Councillor Ueli Maurer, the vice president of the Federal Council and head of the Federal Department of Finance (FDF), will hold meetings with numerous counterparts and representatives from international bodies. Maurer is also expected to meet Indian Finance Minister Arun Jaitley, among other world leaders.