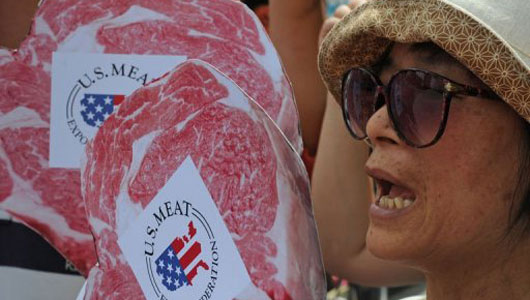 A environmental protester holds a picture of US beef during a demonstration outside the American Institute in Taipei (Photo: Sam Yeh/AFP)

Larger trade talks between Taiwan and the United States have stalled as a result of the country’s indecision about accepting U.S. beef imports.

TAIPEI — Scores of Taiwanese activists staged a protest in Taipei on June 8 against U.S. beef containing the feed additive ractopamine ahead of a parliamentary vote on a controversial bill to allow such imports.

"We don’t welcome U.S. beef containing ractopamine. We want the U.S. to know that even though Taiwan is small, the Taiwanese people want to live with dignity," said organiser Chen Man-li.

The island’s parliament is set to vote next week on a bill to allow imports of U.S. beef containing the growth drug ractopamine, which is used in animal feed to promote lean meat.

The move aims at facilitating trade talks with the U.S. but it has been met with strong opposition from local farmers, activists, opposition parties and even some lawmakers of the ruling Kuomintang (KMT) party.

President Ma Ying-jeou, also chairman of the KMT, has urged the party’s lawmakers to back the bill, saying it will facilitate agreement with the United States on a pact known as the Trade and Investment Framework Agreement (TIFA).

"If we can’t solve the beef issue, they [the U.S.] won’t want to resume TIFA talks and the ties with our third largest trade partner won’t improve," Ma told a party meeting late on June 7.

"If Taiwan won’t open to the world, the world won’t embrace Taiwan ... You vote for the bill for Taiwan’s future and to lead Taiwan to a future of liberalization," he said.

Talks between Washington and Taipei on TIFA, often referred to as a precursor to a full-fledged Free Trade Agreement (FTA), have been dormant since 2007, because of a dispute over imports of U.S. beef.

Washington has recently urged Taipei to ease restrictions on U.S. beef, indicating that the stalled trade talks between the two sides hinge on the issue.

Taiwan, China and the European Union ban ractopamine because of possible human health risks, but 26 countries, including the United States, Canada, Australia and Brazil, have declared the product safe.