The textile and garment industry, now far from its glory days, will have to bank on a possible free trade deal with the United States in a bid to revive its struggling businesses. 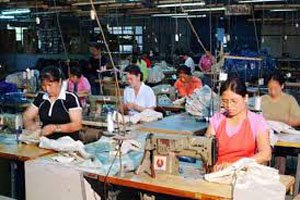 Trade and Industry Secretary Ramon Lopez told reporters on Thursday that the government will try to help the industry through a possible free trade agreement (FTA) with one of its oldest allies.

“We used to be one of the biggest exporters of garments in the world. We supplied to the US. Hopefully, we can bring it back with an FTA,” he said.

He said this on the sidelines of the first ever “Philippine Garment Leader Goods Industries & Fabric Expo,” participated by 81 local and foreign companies in search of buyers.

Only more or less 20 companies are from the Philippines, which shows a glimpse of the current state of the industry.

As the US focuses on bilateral FTAs instead of multilateral deals, there are high hopes that this would eventually bear fruit to an FTA with the Philippines.

Preliminary talks are already ongoing, with the initial goal of finding enough mutual gains to jumpstart the formal negotiations.

This will be a good opportunity for the local industry, which used to be very competitive in its exports, and was even considered a sunrise industry during the 90s, according to DTI-attached agency Board of Investments in a separate statement.

Export performance, however, dropped since the abolition of textile quotas by the World Trade Organization in 2005.

As a result, garment and textile enterprises in the Philippines which relied on quotas underwent difficulties leading to closure of factories and downsizing, BOI said.

In a press briefing earlier this month, William Ang, manager of Globe Textile Inds. Corp., complained about the garment industry receiving little to no support from the government.

“Sayang ang Pilipinas [the Philippines could have been more]. We have a lot of talented designers. We should be the Paris of Asia but what’s happening?” he said.

“Never in my lifetime had the government asked what it could help us with in the industry,” Ang said, who represented the Garments Manufacturers Association of the Philippines during that time.

Wrapping up an FTA might take years, however. In the meantime, Lopez said that companies can apply under the Investment Priorities Plan, which provides incentives such as income tax holiday on preferred kinds of businesses that help reach inclusive growth.

It is not clear, however, if any company in the garment and textile industry applied under the IPP, even though the list includes manufacturing activities.

He also said that garments might be eventually included under the US Generalized System of Preferences (GSP), a trade arrangement allows market access for numerous Philippine exports. He said this will have to come after the inclusion of footwear in the US GSP.