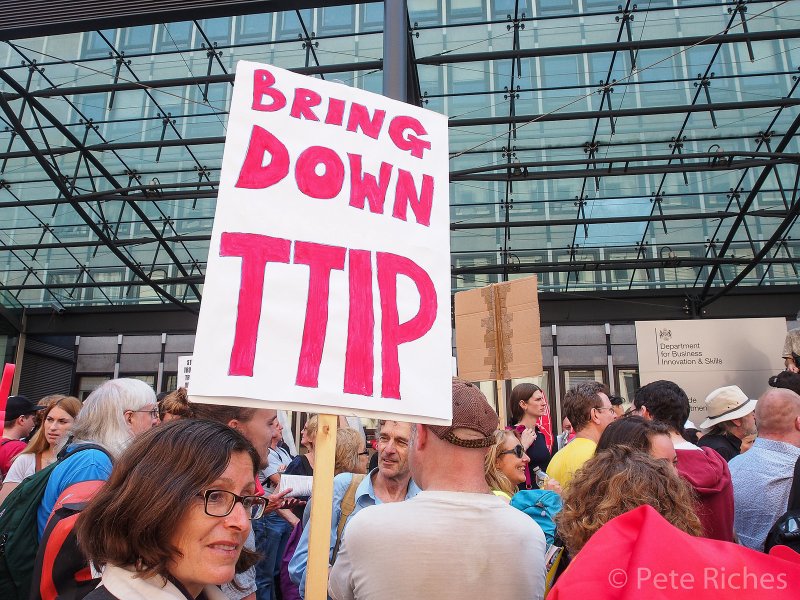 Twenty years after NAFTA, the US and EU are making a renewed push for global free trade. But today the South is better able to resist such a project.

Six years after the advent of the global financial crisis, and with no end in sight, one would have expected that global capitalism would be in a serious state of disarray. Yet neoliberalism, while discredited, retains its hold on policymakers as a default ideology. Finance capital has been able to roll back the initial attempts to re-regulate it in Europe and the United States. And Washington and Brussels have resumed their aggressive efforts to create multilateral free trade regimes.

Today, the United States is pushing hard to complete negotiations with 11 countries that would put in place the so-called Trans-Pacific Partnership (TPP), while it is negotiating with the European Union to set up its twin, the Trans-Atlantic Trade and Investment Partnership (TTIP). These initiatives are in full throttle this year, 20 years after the North American Free Trade Area (NAFTA), the first neoliberal multilateral trade regime, came into being in 1994.

The last 20 years have proven to be a rocky road for free trade.

Neoliberal trade policies did not begin with the birth of the North American Free Trade Area (NAFTA) or the founding of the World Trade Organization (WTO) a year later, in 1995. They had been in place in over 90 developing and transitional economies through structural adjustment programs imposed by the World Bank and the International Monetary Fund for over a decade.

Trade liberalization was one of the prongs of structural adjustment, along with privatization and deregulation. The result was the rise in poverty rates in Latin America in the 1980’s, the so-called “Lost Decade.” As for Africa, by the end of the 1980’s, it had been rolled back to where it was at the time of decolonization in the 1960’s.

The 1990’s saw the Clinton administration push three grand neoliberal trade projects: NAFTA, the World Trade Organization (WTO), and APEC (Asia Pacific Economic Cooperation). NAFTA and APEC were partly conceived as fallback positions in the event that the WTO did not come into being. APEC aimed to unite 21 countries in the Eastern and Western Pacific in a trans-Pacific free trade area, while NAFTA was seen as the first step of a free trade project that would eventually bring the whole Western Hemisphere into a Free Trade Area of the Americas (FTAA). APEC was scuttled by Japan and a number of other Asian countries, which refused the mandatory liberalization demanded by the United States during the critical Osaka Summit of APEC in 1995. NAFTA came into being, but the grandiose FTAA was torpedoed by Latin American governments led by Venezuela, Brazil, and Argentina during the Miami summit in November 2003.

As for the WTO, the push by the European Union and the US to initiate a new round of trade liberalization just five years after the conclusion of the Uruguay Round fell apart during the Third Ministerial in Seattle in November-December 1999, undone by the resistance of developing countries and some 50,000 protesters on the streets.

But the EU and US were undeterred, and at the Fourth Ministerial in Doha in 2001, they employed carrot and stick policies to get the developing countries to sign a declaration launching the so-called “Doha Development Round,” which had nothing to do with development. But the experience of being bamboozled in Doha led developing countries to form defensive blocks within the WTO. There was the Group of 20 led by India and Brazil, which pushed a united stand to resist further liberalization of developing countries’ agricultural sectors while the EU and the US continued to massively subsidize theirs. There was the Group of 33, led by Indonesia and the Philippines, which sought to protect the interests of countries with large peasant populations. Then there was the Group of 90, which resisted the push by the EU and the US to include investment, competition policy, government procurement, and trace facilitation within the remit of the WTO, which would have meant bringing more dimensions of economic life under the disciplinary authority of this body. It was members of the Group of 90 that led the walkout during the Fifth Ministerial of the WTO in Cancun in September 2003 that brought about the collapse of that meeting.

After over a decade of negotiations that went nowhere, a major attempt was made to revive the WTO leading up to Bali Summit in November 2013. A Trade Facilitation deal was promoted by the North that was initially premised on the countries of the South curbing their food security measures. Agreement on the deal was supposed to have been obtained at Bali when India withdrew its opposition after getting developed country assurance that its food stockpiling policies would not be challenged. Three weeks ago, however, India made a turnaround saying that the deal was off since the developed countries had reneged on their promise to find a permanent solution to the food security needs of developing countries. This collapse will probably mean the end of the WTO as a mechanism for trade liberalization.

After the collapse in 2003 of the Cancun Ministerial—the second in four years—then US Trade Representative Robert Zoellick made his notorious remarks to the effect that the WTO was composed of “can do” countries and “can’t do countries,” and that the US would “do business” only with the “can do” countries. The US and EU began to rely less on the WTO as a mechanism for trade liberalization and more on bilateral or multilateral free trade agreements (FTAs). By 2012, the US had concluded 21 FTAs. Not wanting to be left behind, the EU had 23 and Japan had 13. There were several key features of these agreements:

many imposed intellectual property rights clauses that were even more restrictive than those of the WTO’s TRIPS Agreement;

they subordinated the environment and the interests of labor to trade liberalization;

many empowered foreign corporations with the right to sue states for what they regarded as violations of investment contracts.

Continuing Washington’s effort to find an alternative to the WTO as a multilateral mechanism of trade liberalization, the Obama administration three years ago resurrected the original APEC free trade project in the form of the Trans-Pacific Partnership (TPP), which would unite 12 countries bordering the Pacific in a free trade area. This agreement is being negotiated in secret because, as former US Trade Representative Ron Kirk has said, many of the provisions of the TPP are so unpopular that people would reject it if they were made public in transparent negotiations. The proceedings of some negotiations have been leaked, however, and these reveal that the environmental protection provisions are very weak, the US is pushing for tough intellectual property provisions, and corporate investors would be given great leeway to sue states in cases of conflict over contracts.

Washington has been trying to wrap up negotiations on the TPP before the 2016 elections, but it has not been easy. During his visit to Japan in May of this year, President Obama was dealt a stunning setback when in exchange for a US commitment to defend the Senkaku Islands (Diaoyu Islands in Chinese), he was unable to secure a trade agreement with Japan that would have pried open further the country’s highly protected agricultural sector. The deal was a key step towards the completion of the TPP since the US and Japan are the two biggest economies in the projected 12 country pact.

The US has made it clear that the other half of its global trade agenda is the TTIP. TTIP is TPP’s twin. Like the TPP, it is being negotiated in secret. Like the TPP, it aims not only at eliminating trade barriers but to weaken regulations on corporate activity and do away with investment restrictions. Both seek to institutionalize mechanisms that would allow corporations to sue states for imposing restrictions on their activities.

Both the TTIP and the TPP have not only been conceived as substitute multilateral mechanisms for trade and investment liberalization in place of the stalemated WTO. They are also a defensive response of the old center economies to the rise of the South and especially of the so-called BRICS.

The BRICS are among the new dynamic centers of the global economy, and though they rely on the US and EU as markets, they are also competitive with these economies. A great deal of their competitive power derives from the fact that the state plays a very significant role in supporting domestic and state industries in the BRICS, and the strategic aim of both TPP and TTIP is to create a bloc that would make the dismantling of the activist or interventionist state in the South and the BRICS a precondition for expanding trade and economic relations with Europe and the US.

As Manuel Perez-Rocha and Karen Hansen Kuhn point out, “Given the global shifts of power where the main actors are the BRICS countries and in particular China, some have wondered whether the hidden agenda of the TTIP may be part of a ‘West against the Rest’ strategy to shore up a US-European alliance against the perceived threat posed by emerging economies…”

Indeed, there are geopolitical dimensions to both projects. The TTIP is largely congruent with the NATO military-political bloc, while the US has made it clear that the TPP is the economic correlate of its “Pivot to Asia” military strategy, with the aims of the first to isolate Russia and that of the second to contain China.

Towards a New Trade Paradigm

In the face of the renewed corporate thrust for free trade, how are developing countries responding? The BRICS are tightening their economic coordination, and preferential trade arrangements among them are likely to follow their recent impressive moves of establishing the New Development Bank to rival the World Bank and their Contingency Reserve Fund to parallel the International Monetary Fund.

For both the BRICS and other developing countries, say advocates for the South, an offensive strategy pushing a new trade paradigm is needed. Among the elements of such a paradigm being discussed are the following:

Promotion of more regional economic agreements like the Bolivarian Alternative for the Americas or ALBA, which makes economic cooperation and development, not free trade, the centerpiece of economic relations among countries.

A push for an international trading regime that provides a lot of development space. While it had its flaws, the GATT system (General Agreement on Tariffs and Trade) left a lot of “development space” for developing countries, and many advocate a return to something like GATT instead of the neoliberal WTO, which eliminates practically all development space. Even better yet in their view is a reinvigorated United Nations Conference on Trade and Development (UNCTAD), which has among its central principles the “special and differential treatment of developing countries.”

Abandonment of the export-oriented strategy of development that the World Bank and neoliberal technocrats pushed on developing countries which has made them very vulnerable to Northern corporate power because it has made developed country export markets rather than the domestic economy the center of gravity of the economy. Focusing on the domestic market, progressive analysts say, will necessarily push countries to undertake reforms promoting more equitable income distribution to create domestic demand that will trigger industrial development.

Twenty years after NAFTA, the US and EU are making a renewed push for global free trade. But compared to 1994, the capacity of the South to resist the free trade project and come up with a trade paradigm with a different vision and based on different principles is greater today.

Telesur columnist Walden Bello is a member of the House of Representatives (Parliament) of the Philippines. He is the author or co-author of 18 books, the latest of which is Capitalism’s Last Stand: Deglobalization in the Age of Austerity (London: Zed, 2013) and Food Wars (London: Verso, 2009).