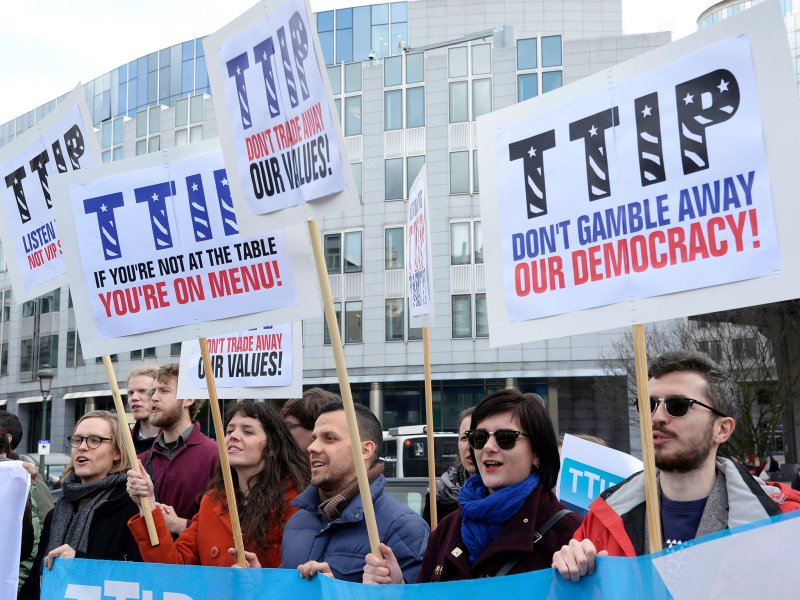 The government’s trade bill has its second reading on Tuesday, something which has gone unnoticed by many campaigners and commentators, let alone the wider population. And that’s a problem. Anyone who cares about democracy, our nation’s prosperity and the future of post-Brexit Britain, should care deeply. It is nowhere near as innocuous as it sounds. It’s a Trojan horse.

If allowed to pass through parliament without significant changes, it would give ministers unprecedented powers to bypass parliamentary scrutiny in forming future trading relationships – with severe consequences for democracy, human rights and the power of multinational companies.

The first thing to understand is that the trade bill is bad law because it attempts to legislate over areas where the government has no control. Officially speaking, it aims to “assist in the transition of over 40 existing trade agreements between the EU and other countries”.

In other words, to copy and paste trading arrangements that the EU currently has with other non-EU countries, such as Turkey, so that the UK also keeps these trading arrangements after Brexit. That sounds like a no-brainer for remainers, who want to protect existing trade arrangements. But in reality, once we have left the EU, it’s not up to the UK government whether or not these trade agreements remain in place. We cannot assume that our trading partners will guarantee us the same terms: after all, the EU is the world’s largest trading bloc and largest economy; the UK is not.

Any sensible country would seek to renegotiate all trading terms with the UK – and the trade bill, even if supported by every British MP, can do nothing to stop that. So, the bill is flawed because it cannot do what it purports to.

But what it can do is far more dangerous. Ministers taking the power to copy and paste existing trade arrangements would also have the power to create and edit trade deals without parliamentary scrutiny. On that basis, Boris Johnson and Donald Trump would be allowed to agree a new trade deal behind closed doors without any democratic accountability.

Such a UK-US deal, unfettered, might include anything from antibiotic and hormone-impregnated meat and unsafe chemicals, to US entry into our NHS, and fracking in our countryside. That’s why the government has already declared that the US trade deals will be kept secret until four years after talks are concluded.

Before Brexit, I secured a parliamentary vote in favour of scrutiny of international trade deals such as the Transatlantic Trade and Investment Partnership (TTIP), the proposed EU-US trade deal. I’m in favour of increasing international trade, but TTIP’s investor-state dispute system allowed multinational firms to sue national governments for passing laws which harmed their profits. Mexico was sued for a tax on sugary drinks to combat diabetes and Canada for a moratorium on fracking in Quebec.

If the UK passed laws to protect public health, our environment or rights at work then American firms could in theory sue for any lost profit. TTIP was abandoned. We cannot allow this bill to usher in its worst aspects in future trade deals under the cloak of darkness.

The bill needs public attention and a fundamental rethink. Parliamentary scrutiny and consent must be written into the bill, so that trade agreements are ultimately accountable to what is best for the British people, not what suits the interests of multinationals or the governing party.

Devolved administrations in Wales, Scotland and Northern Ireland must also have a say, with public consultation where necessary – particularly over controversial issues such as fracking, which can wreck local areas of natural beauty. Transparency is also essential. This not only fosters public trust, but also incentivises the government to tailor deals in the public interest.

Most of all, there must be a compensation mechanism for communities, businesses and groups adversely affected by future trade agreements. An independent body, or at the very least a parliamentary scrutiny committee, must be established to assess the impact, with particular reference to human rights, the environment and workers’ rights.

As this bill progresses beyond its second reading, I will be working with colleagues across the House of Commons to secure these amendments before it’s too late.

For what worries me most is the chilling vision we now have of what the Tories have in store for post-Brexit Britain. Cutting ourselves off from the European market is already costing the UK £350m a week, workers are losing a week’s pay a year due to inflation, and the divorce bill will cost each family a further £1,000. Rapidly putting together new bilateral trade deals without parliamentary or public scrutiny is no solution.

The UK’s weak negotiating position, combined with a desperate government peddling a toxic Brexit ideology, create the prospect of hidden costs in future trade deals. Those costs will be seen in our environment, our rights at work and public services. This isn’t what anyone voted for. It’s a veiled attack on our fundamental rights and protections. The time to resist is now.

Geraint Davies is the Labour MP for Swansea West