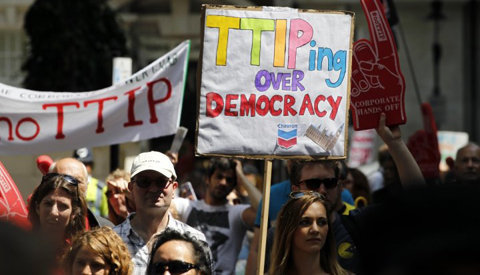 Translated by Anoosha Boralessa (March 2016) (not reviewed by bilaterals.org or any other organization or person)

Private arbitral tribunals will be able to impose multi-million fines on States whose parliaments have dared to legislate without taking into account corporate expectations.

The TTIP has a special chapter - the Tisa or the Trade in Services Agreement. This is of huge interest to large private companies, as it claims to defend multinationals’ profits over and above any other civil right, harmonizing a lower level of legislation, regulating public services in the signatory states.

Private Arbitral tribunals will be able to impose multimillion fines on States whose parliaments have dared to legislate in defence of their citizens without taking into account the expectations of corporate profit.

The public courts of justice will not be able to intervene nor to appeal these decisions.

The European Parliament (EP) has recently taken the decision to lobby the European Commission (EC) for a treaty carve-out for the most sensitive public services such as health. However, the European Commissioners, that single-handedly negotiated the treaty with corporate lobbies behind the backs of democratically elected parliaments, have the final word; it is hardly likely that they will take into account Parliament’s recommendation.

On the other hand, health is a core objective of the TTIP. This is demonstrated by the heavy presence of lobbies in the Sector in their negotiations with the European Commission, both of pharmaceutical laboratories (EUCOPE, EFPIA, PhRma, TABC), that claim the free flow 2015061117432593688 of information on patients and a free market in patents, free of price control, and in medical technology companies (COCIR, ADVAMED), in addition to the omnipresent IBM (principal beneficiary of Open data), Philip Morris, the bank and the General Council of Spanish Lawyers, given the multimillion niche that private arbitrations opens up.

Big law firms in Spain already provide departments specializing in defending the interests of the pharmaceutical industry. One such law firm is Garrigues, whose Honorary Chair is Garrigues Walker, the founder of Transparency International (TI) and a huge defender of the opaque and anti-democratic Free Trade Treaty (TTIP).

Potential Consequences of the TTIP/TISA on the National Health Sector (SNS):

• Loss of the right to collective bargaining and other acquired labour rights.

• Thousands of dismissals in the SNS, through cutbacks and establishment foreign health companies setting up shop with their own professionals.

• The absence of the precautionary principle at the time of approving and selling foods, drugs and medical devices, with serious consequences for the population’s health. The Volkswagen Fraud has highlighted the absolute need for controlling multinational businesses and the decision taken at the time, to protect the health of European citizens that will be compromised with the TTIP.

• Facilities for privatizing public services and the impossibility of nationalizing those already privatized, although this privatization does not confirm to the law. Once the TTIP is approved, the judiciary will not be able to grind to a halt to illegal privatizations such as Madrilenian health service.

• Trade in blood and transplants, of enormous interest to high level health tourism which together with Open Data can facilitate detecting donors and purchasing organs from Spanish citizens or poorly sourced immigrants. This has already been detected in Spain.

• Analysts also predict enhanced conditions for corporate tax evasion and avoidance. This will ruin the public coffers, increase cutbacks and prevent the SNS from continuing to operate.