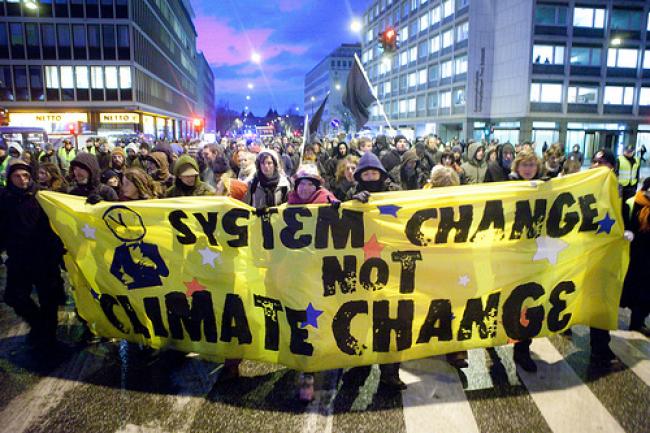 The European Union has been caught trying to undermine any meaningful outcome from the UN climate talks in Paris by instructing its representatives to block discussion of two key mechanisms that could help combat the effects of global warming: the introduction of measures to curb the negative environmental impacts of global trade, and the transfer of technology to help poorer countries in their fight against climate change.

As the COP21 negotiations enter their final week, a leaked internal EU document published today reveals that European governments have instructed their representatives to block any discussion of measures to combat climate change that might be a “restriction on international trade”. While delegates from the global South have called for greater flexibility in trade agreements to protect their fragile ecosystems, the EU insists that the Paris talks must not allow other countries to limit trade and investment opportunities for European corporations seeking to penetrate new markets around the world.

Moreover, the EU has instructed its representatives to prevent the UN from launching any future work programme to look into the issue of trade measures and climate change, or from setting up formal links with the World Trade Organisation as the international body tasked with overseeing global trade rules. When it comes to the issue of technology transfer that might assist poorer countries in climate change mitigation, the EU instructs its representatives to block any challenges to the existing “intellectual property rights” regime that favours the continuing corporate control of technology.

The Transatlantic Trade and Investment Partnership (TTIP) now being negotiated between the EU and the USA exemplifies the contradiction between Europe’s rhetoric on free trade and climate change. The European Commission has admitted that TTIP represents a danger to biodiversity, natural resources and the environment. In its official impact assessment, published at the start of the EU-US negotiations, the Commission admits that the ambitious outcome it seeks in TTIP will see millions of extra tonnes of CO2 pumped into the atmosphere. Yet at no time have European governments considered this a reason to rethink the deal.

On the contrary, the EU is pressing for a dedicated energy chapter in TTIP that will see a massive increase in imports of gas and oil from the US – including oil from the notorious tar sands, known to be among the dirtiest and most carbon-intensive of all fossil fuels. The recent revelation that EU trade commissioner Cecilia Malmström has handed over the drafting of this energy chapter to the oil and gas companies themselves shows the contempt the EU has for all those trying to avert climate catastrophe.

The new investment court system that the trade commissioner has designed for TTIP will grant US companies a new power to sue European countries over any future public policy decisions that could harm their bottom line – including any environmental regulations designed to prevent an increase in greenhouse gas emissions.

The EU knows that it cannot maintain its fiction of being a “global leader” in the fight against global warming while it pushes ahead with a new generation of climate-hostile free trade deals. Yet instead of addressing the hypocrisy of its position, the EU has told its representatives to block any discussion in Paris.

The governments of Europe would rather condemn the world’s most vulnerable communities to the full impact of runaway climate change than open up an honest debate of the issues. Shame on them.