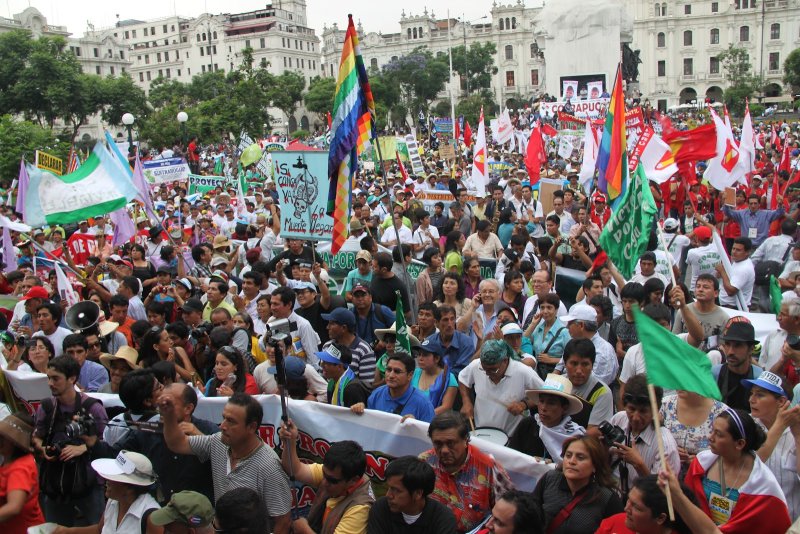 More than 2,000 people marched in Lima, Peru on February 29 in opposition to the government’s plan to privatize public water services.

Telesur, a pan-Latin American television network based in Caracas, reports:

"People marched from the south of Lima to the facilities of ProInversion, the governmental agency in charge of privatizations. Demonstrators fear that privatization will increase the price of drinking water and make it more difficult for ordinary people to access water while favoring the real estate sector among others. ...The protest was organized by small neighbourhoods and the public water workers union Sedapal. ...In a previous protest held on February 18, about 10,000 people came out to voice their concerns with the bill."

In February 2012, the Council of Canadians expressed solidarity with "The March for Water" which had demanded the recognition in the Peruvian constitution of water as a human right and a resource that cannot be privatized, a ban on the use of mercury and arsenic in mining, and an end to mining in the headwaters of river basins. At that time we stated, "The Council of Canadians stands with the more than 200 communities and civil society organizations in Peru who are demanding an end to mining injustice and calling for water to be recognized as a human right within the Peruvian constitution."

In 2009, the Council of Canadians also opposed the Canada-Peru Free Trade Agreement, a deal intended in part to promote more mining in that country. By 2011, there were massive protests against Vancouver-based Bear Creek Mining pursuing its proposed Santa Ana silver mine given it could pollute Lake Titicaca. Those protests resulted in the Peruvian government withdrawing Bear Creek Mining’s concession to develop the silver deposit. By Feb. 2014, the company had delivered a Notice of Intent to Submit a Claim to Arbitration under the Canada-Peru FTA.

This arbitration is being heard by the International Centre for Settlement of Investment Disputes, which was established through "a multilateral treaty formulated by the Executive Directors of the World Bank to further the Bank’s objective of promoting international investment." Formal filings in this case began in May 2015 and in-person hearings are scheduled to take place from September 8-16 at the ICSID headquarters in Washington, D.C.

Canada and Peru are also signatories to the proposed Trans-Pacific Partnership.

Expert papers have highlighted that the TPP poses a threat to both public water services and the protection of water itself.

"Investors from TPP countries will have the power to challenge local government decisions that damage their commercial interests, including disputed procurement or PPP [public private partnership] contracts, planning and consent processes, or blocking price increases for utilities like water or sanitation. ...The contracting out of services, greater use of PPPs, including for water, and asset sales will intensify the exposure of local government to the TPP and heighten the risks of investor-state disputes over disputed contracts."

"The environment [including water protection] is a significant casualty under the TPP. There is a gross asymmetry in the rights and means accorded organisations that would seek to protect the commons for the public good, and rights and means accorded foreign investors to protect private wealth. Adopting the lens of the foreign investor when making broad governance changes through the TPP has sidelined the opportunity to properly integrate management of the economy with management of other domains — such as the environment."

"We live in a world that enshrines the inalienable right to accumulate more and more private property and wealth through an increasingly deregulated global market. In this world, governments initiate aggressive policies to privatize water resources in order to entice foreign capital. And they sign trade and investment treaties such as CETA, TTIP and TPP that give transnational corporations the right to sue governments for any new measures to protect their water or the human rights of their people, thus locking in the lowest common standards."

She then concluded, "Rather than seeing water as a resource for profit, we need to understand that it is the essential element in all living ecosystems. All policies and practices must be planned with the preservation of water at their core. Not only do we have to reject the market model for our water future, we must put ourselves at the service of undoing what we have done to the natural world and hope it is not too late."