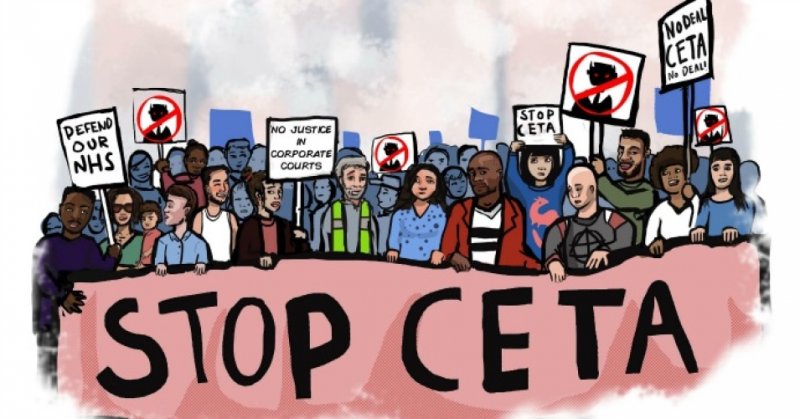 ’What we see with CETA,’ writes Dearden, ’is European and Canadian governments risking environmental and social protections in order to bat for their own big business interests on both sides of the Atlantic.’ (Illustration by Jacob V Joyce)

Three more reasons why we need to stop CETA

Last week I joined activists and campaigners from across the globe who came to Canada for the World Social Forum. A major topic of discussion was the problems with TTIP-style free trade agreements and how we can stop them.

For us in Europe the big one is now CETA – the Canada-EU trade deal (formally the Comprehensive Economic & Trade Agreement) which could become law as early as next year. Unless we stop it.

Our allies from across Europe and Canada gave some strong reasons for us to get more active on CETA.

1. CETA really is TTIP by the backdoor.

Many US corporations now operate in Canada because the two economies have been heavily integrated since the signing of another big trade deal 20 years ago, NAFTA. The infamous corporate court system – which allows foreign corporations to sue governments for pretty much anything they don’t like – is in CETA just as its in TTIP. It’s a somewhat reformed version in CETA, but not reformed enough to stop any of the cases we don’t like such as countries being sued for protecting the environment, introducing social protection in regulation etc.

So if CETA comes into effect, hundreds of US-based corporations will be able to sue the UK, through Canada, whether we have TTIP or not. And let’s not pretend Canadian multinationals haven’t aggressively used these corporate courts too!!

2. Canada’s law could threaten our own protections.

CETA has less resonance on the streets than TTIP – perhaps because Canada doesn’t seem as ‘big and bad’ as the US economy. But Canada has some terrible regulations which are a real threat to our laws. For instance, Canada is the third largest producer of genetically modified products in the world. They’ve just invented a genetically modified salmon, we were told, which wouldn’t require any special labelling. They also have terrible animal welfare conditions.

If British farmers have to compete against big agribusiness using these techniques, they either face going bust or we lower our own standards in a regulatory race to the bottom.

3. Our negotiators said ‘yes’ to tar sands so they could rip open Canadian local government.

It seems pretty clear now that the deal on CETA was made something like this: First, Europe would drop its objections to the dirtiest fossil fuel on the planet – tar sands oil, which is turning vast swathes of Canada into a devastated moonscape. This has happened already. In return, European big business would get access to Canada’s huge local procurement market. Canada still has strong public services and protections which allows local authorities to use their purchasing power to support, for instance, local farmers and local businesses selling to schools and hospitals. But that could be over with CETA. No wonder dozens of local government bodies have asked the Canadian government to be exempted from the deal.

This links to another worry for Canadians, which could affect their small farmers. Canada uses government purchases of farm produce to give farmers price stability. Canadians fear this will be challenged by CETA as an unfair form of protection, throwing farmers even further onto the mercy of the ‘free’ market.

So what we see with CETA, it seems, is European and Canadian governments risking environmental and social protections in order to bat for their own big business interests on both sides of the Atlantic. As we always thought.

If our governments want to protect the interests of their corporations, it’s for the people of Europe and Canada to stand up for their own interests – and make sure this awful deal never becomes law.