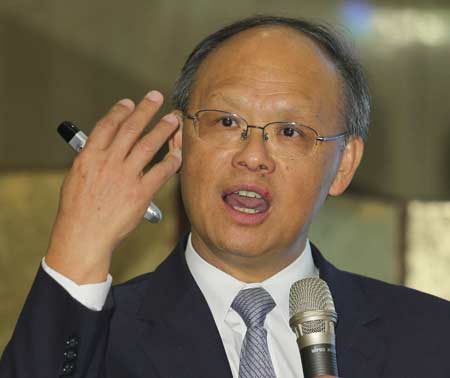 TAIPEI, Taiwan — The next round of the Trade and Investment Framework Agreement (TIFA) talks between Taiwan and the U.S. will be held in October in Taipei at the earliest, Economics Minister John Deng (鄧振中) said yesterday.

Besides food safety, Taiwan is expected to raise issues relating to the Trans-Pacific Partnership (TPP) and bilateral investment agreement (BIA) in the meeting.

Taiwan and the U.S. resumed the TIFA talk in 2013, and agreed that Taipei and Washington will take turns to hold annual meetings in April.

The scheduled meeting did not take place this year, however, as the U.S. was busy with TPP negotiations with other countries. Consequently, the TIFA talks were postponed until a later date.

Imports of U.S. pork containing ractopamine, a leanness-enhancing drug, will not be discussed in the meeting, Deng said. The economics minister had said repeatedly that it is not the opportune time to resolve the debate.

However, the two countries have been communicating with each other on the issue via small conferences, Deng said.

The two sides are still in discussions over the exact agenda, which once hammered out will be disclosed to the public, said Jenni Yang (楊珍妮), director-general of Economics Ministry’s Bureau of Foreign Trade.

Yang confirmed that food safety is one of the items on the agenda, and Taiwan is expected to raise issues regarding Taiwan’s participation in the TPP framework and the BIA with the U.S.

The U.S., on the other hand, is expected to put the subject of agricultural product import as a priority.

As Taiwan strives to participate in regional economic integration, inking the cross-strait goods trade agreement will give the country more bargaining chips, Economic Minster Deng said at yesterday’s regular meeting of the Third Wednesday Club (三三會), a syndicate of business leaders across industries.

Taiwan’s opportunity really lies in the Southeast Asian market, but without the goods trade agreement, Taiwan has encountered great challenges as it tries to gain membership in the TPP and the Regional Comprehensive Economic Partnership (RCEP), Deng said.

The market expects the U.S. Fed to soon announce its interest hike decision. A higher rate signifies a good recovery momentum, which is good news for Taiwan, especially the export sector, the economics chief said.

Although exports overall have fallen this year, exports to the U.S. have been trending upward, Deng said, adding that he is still optimistic about the economy.