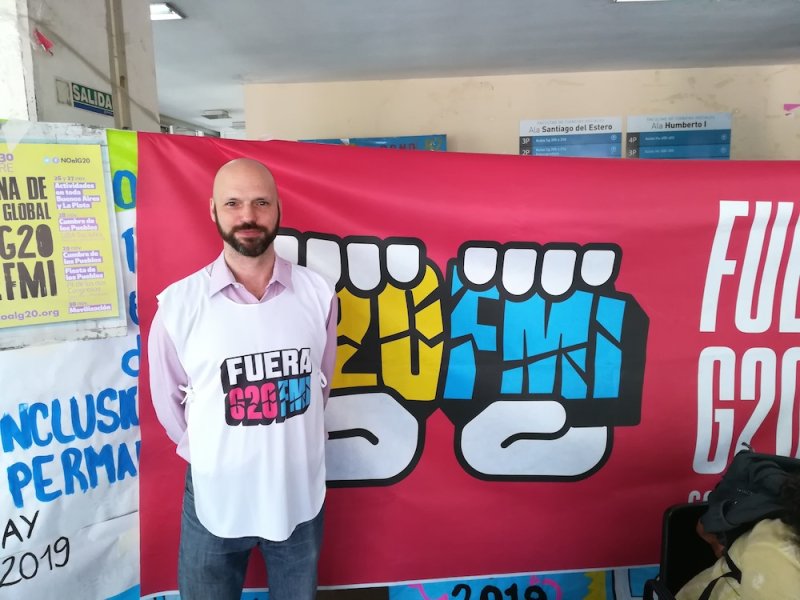 Javier Echaide is a lawyer and a member of Attac Argentina

A: For the past three years, foreign investment has been low in Argentina so the government is trying to negotiate new bilateral investment treaties (BITs). It’s also negotiating a new free trade agreement with Chile. This week during the G20 summit, President Macri wants to sign a new BIT with Japan. He already signed BITs with Qatar and the United Arab Emirates. So he’s returning to the old neoliberal politics of the ‘90s and we are worried about that.

Q: Especially since Argentina has faced the most investor-state dispute settlement (ISDS) cases in the world.

A: Yes and one of the problems is that the population is not really aware of the dangers of BITs. They have some concerns but they don’t know the whole picture. It’s not something that is common knowledge that everyone knows. And that’s why the Macri government can move forward and sign these treaties again. We have to work harder and better on this specific point.

Q: What are the most emblematic arbitration cases in Argentina?

A: Over the past five or six years, a very big case was the one with the vulture funds and the national debt. Other cases that are somewhat related are the ICSID [arbitration tribunal at the World Bank] cases with Italian bondholders. These cases not very well known to the public. They link the national public debt to the international ISDS system. The Repsol case was also important as it was settled for 5 billion US dollars plus interest so about 6.17 billion, which is a lot of money that could have been used for better things. The case was about the renationalisation of oil exploitation under the former Kirchner government.

Q: Since it’s the G20 summit now in Argentina, what links do you see between the international investment system and the G20?

A: The G20 is a small table. Every year, a few decisions are made about governing the globalisation process. But there are other meetings on the sidelines of the G20 and that’s also important. For instance, Macri wants to sign a BIT with Japan. That’s not part of the main G20 agenda but that’s being pushed forward. The neoliberal agenda comes with the G20, the IMF and so on.

Q: How do you see the future political environment in Argentina?

A: I don’t think Macri has a plan B. For him, neoliberalism is the only way forward. Macri only believes in building relationships with the likes of the US or Europe. He doesn’t think about building bridges with BRICS countries, for example, or about Latin America as a bloc. So it’s a problem. It’s like going back 20 years ago to the ‘90s. But we also have 20 years of experience now. We have grown up. And the new generation is working through a network that is not based on a big single minded campaign but rather on small structures working together, which allows organising forums, events and debates. It’s a new experience, but it takes into account past experiences as well. After 20 years of free trade, we know the negative impacts. So today we work to build something else.