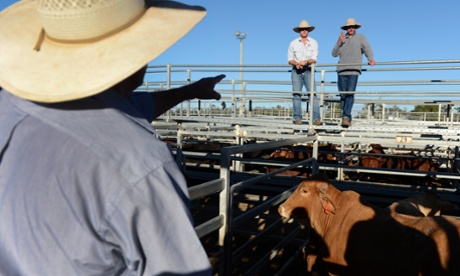 Tony Abbott has confirmed Australia and Japan will sign a free trade agreement this week, despite Labor sounding alarm over the government’s decision not to commission economic modelling of the costs and benefits.

The prime minister said he would sign the deal during a visit to Australia by his Japanese counterpart, Shinzo Abe, who is due to address parliament in Canberra on Tuesday.

Abbott said Japan was Australia’s second-biggest trading partner, with almost $70bn in two-way trade every year, and the agreement would be historic.

“Australia is a trading nation – and more trade means more jobs,” Abbott said in a recorded message on Sunday.

“This agreement is important for our farming sector – with better access to Japan for our beef, cheese, horticulture and wine – and consumers will benefit from less expensive household appliances and electronics.”

The signing of the economic partnership agreement will occur three months after Abbott and Abe announced the conclusion of negotiations during the Australian prime minister’s visit to Japan in April.

While Abbott stressed the benefits, the opposition questioned why the government had not commissioned modelling to verify the economy-wide impacts of the deal it had negotiated.

Labor’s Senate leader and trade spokeswoman, Penny Wong, referred to confirmation from officials during a Senate estimates committee hearing last month that the government had “not done a new modelling exercise” since a 2006 study.

Jan Adams, deputy secretary of the Department of Foreign Affairs and Trade, pointed instead to work that industry group Meat and Livestock Australia had produced specifically on the beef outcome, projecting a $5.5bn cumulative gain in sales over 20 years.

Asked why economic modelling was commissioned for the free trade agreement with South Korea but not for the deal with Japan, Adams said she thought the government “decided that we negotiated the package the best that we possibly could”.

“Government has decided it did not need to go into the fine gradations of trying to model the complex Japanese agriculture systems and the changes thereto,” Adams told the committee.

She confirmed it was “a government decision” at ministerial level.

Wong called for the full text of the agreement to be released, saying “a five-page pamphlet on the Department of Foreign Affairs and Trade’s website” was all the public knew about the deal.

“Australian farm groups have expressed concerns about the quality of the agreement,” she said. “It has also been revealed that the Abbott government will not conduct any modelling to assess the economic impacts of the deal it has negotiated.

“Trade agreements which secure genuine improvements in market access for Australian business are good for jobs and growth, but the government should not take community support for granted by signing trade agreements before they have been subject to scrutiny.”

A spokesman for the trade minister, Andrew Robb, said the key outcomes of the agreement were “well known” and the full text would be tabled in parliament “in the very near future”.

Asked why the government had not commissioned modelling of the outcome of its negotiations, the spokesman said an extensive feasibility study in 2006 included modelling that showed the benefits of an economic partnership agreement with Japan.

“This work remains publicly available,” he said. “The beef industry also conducted modelling of the agreement which shows major benefits for beef in the order of $300m plus per year, beef being our major agricultural export to Japan.”

Robb’s spokesman accused Wong of taking “pot shots”, saying Labor had failed to conclude this agreement during its six years in office.

The National Farmers’ Federation president, Brent Finlay, has previously said he was disappointed with the agreement’s overall outcomes for agriculture “with a number of sectors facing marginal improvements or limited commercial gains” including dairy, sugar, grains, pork and rice.

Adams told the Senate estimates hearing that the industries that had made negative comments about the deal covered “the five areas that Japan routinely, and up until now, has always consistently excluded from all of its trade agreements”.

A government information sheet said Japan would cut the tariff on fresh beef from 38.5% to 23.5% over 15 years and the tariff on frozen beef would be cut to 19.5% on full implementation.