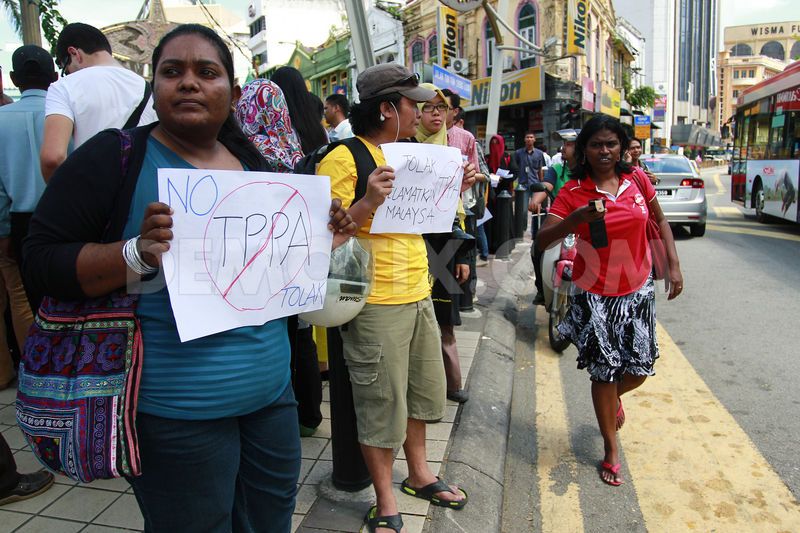 Kota Kinabalu: Plans to amend several laws could see the safety net of Malaysian workers compromised to pave the way for the adoption of the Trans-Pacific Partnership Agreement (TPPA) in Malaysia.

“With the TPPA coming and 12 nations are involved, it would be hard for investments going into Malaysia if laws protecting the workers are tough.

“The changes will cover workers from all sectors. But we are not supporting this,” said Awang Ali, revealing MTUC Sabah has already handed a memorandum to the Human Resource Ministry on Wednesday to oppose such amendments.

He claimed to be aware over the government plans following a briefing held by the Human Ministry’s Legal Officer with the MTUC Sabah on June 9.

According to him, one of the amendments will see non-locals or foreigners being able to hold positions in workers’ unions such as a committee member or president, from just being ordinary members at present under the Workers’ Union Act.

“If they allow this, the president could be making decisions or call for a meeting from Indonesia if such thing materialises,” he said.

Under the Industrial Relations Act, certain sections could also be changed or abolished to reduce the obligation of employers to retain employees.

Meanwhile, the maximum working hours could be extended to 18 hours from 12 hours a day under the Sabah Labour Ordinance, he said.

“Many of the employers to come from the TPPA do not want a strong commitment to their workers,” he claimed.

Towards this end, Awang Ali said a committee will be set up to gather inputs of workers from all sectors, before a tri-partite meeting is held between employers, workers and the government to discuss the amendments in the months to come.

He maintained that all present laws are good enough and need not be amended.