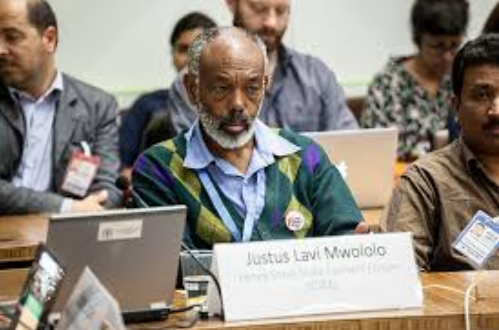 "Trade agreements do not build us" an interview with Justus Lavi

Tell me about yourself and the farming methods you practice.

I was born on a farm. In our family, we have a long history of farming. I practice mixed farming of crops and livestock. We have some varieties of banana that are almost a hundred years old, and maize, beans and other crops that my mother kept that are more than 50 years old. We keep not only domesticated seeds, but also wild seeds because they form a very important part of the ecosystem and biodiversity.

What is the Kenya Small-Scale Farmers’ Forum?

Can you talk about the impact of privatization on agriculture and specifically about the ‘Green Revolution’?

Privatization was driven by the industrial conglomerates of Europe, US, Canada, and Australia that all wanted to capture the world market. One market is Africa. The “Green Revolution” was promoted by a few companies that want to capture the agricultural sector. This was being framed as if Africa missed the earlier Green Revolution, which is not true. Africa missed nothing and we know some big companies that are behind this, companies like Monsanto, Aventis. Their main interest is capture and dominance of the seed market because what they are introducing is Genetic Modified Organisms. It is not about a green revolution or about aiding Africa at all. It’s about bringing in their own seeds so that they can knock out the traditional seeds existing in Africa and small-scale farmers will remain dependent on them for seeds.

How exactly would small-scale farmers become dependent on them for seeds?

The genetically modified seeds are patented, and they are more colonizing and domineering than the traditional or indigenous seeds. Once they come, the indigenous seeds will be changed by the modified seeds. That means a loss of the biodiversity that we have. And once that is lost, we have to go for the seeds that are produced by biotechnology companies. Genetic engineering is very expensive, they usually charge heavy royalties. It has been revealed that to be able to control human beings, you can do very few things. One among them is to control food. And where does food come from? From seeds. Seeds remains one of the biggest businesses in the world.

Those who are promoting the Green Revolution say the use of inputs will improve farmers livelihoods. Is there any truth to that?

The inputs we are talking about are fertilizers and chemicals. We are worried about fertilizers because in areas where we have used them intensively, they have made our soils saline. This use of fertilizers is short lived because the repair of those soils is very expensive and takes time. So African small-scale farmers are advocating for organic farming. Inorganic is responsible for a lot of diseases. we are proposing and campaigning for agro-ecology, which is agriculture that is friendly to the ecological systems.

What challenges have you experienced in promoting this kind of agriculture?

The challenge that we have first is dissemination of information and lack of financial support. Our information does not find any space in the media. Then there is the challenge of competition with hybrid producers because they are backed with big money. You find they are the ones in media, on radios, on TV, in newspapers. These guys are opposing [us] in a very big way. Publicly they won’t say that, but the actions that they are performing clearly portray their opposition.

Are there small-scale farmers that embrace hybrid seeds and the ‘Green Revolution,’ or is there substantial resistance to them?

A lot of people are aware and today, agriculture is being portrayed as for profit. When people are told that by embracing this sort of farming style, they are going to make money, they are bound to give it a try. And thereafter they find it is not working. I will give you an example in India where farmers were introduced to BT cotton. It failed – farmers found themselves in trouble and a large number of farmers committed suicide. There were a lot of tricks used and collaboration between big corporates in India and the media. Farmers were told that they would make money that has never been seen in this world only for them to end up ending their lives.

The chemicals used with commercial seeds have also led to the elimination of pollinators - bees, butterflies, for example, and the situation is so intense that in places like Gujarat in India, you find people pollinating crops manually by hand. It is crazy. God has never created such systems. During the time when Kenya had a coffee boom, there was the herbicide used called Roundup which as declared by the WHO as carcinogenic. I know women in the 60s and 70s who are today grandmothers and some of them have numerous cancers.

How does seed certification work?

Government institutions certify them. And those laws that have been introduced about 10 years ago say that farmers should grow certified seeds, like hybrids, because they will give more yield. This has no practical truth. It’s actually a marketing gimmick because farmers have been growing crops for years. For the old people, they have had seeds throughout the years and nobody certified them. And actually what they are certifying most is food crops. Why don’t they go and certify all the seeds in the forest, why are they focusing on food crops? Because they want to control the crops and increase their profits.

What about Economic Partnership Agreements (EPAs). What is their impact on small-scale farmers?

Under EPAs, which are being negotiated between the EU and Africa, Caribbean and Pacific Countries (the ACP), small-scale farmers are disadvantaged if we try to market our produce in Europe and even we are worried that since some countries have signed EPA, when those cheap products of Europe start flowing into the African market, the African produce will be knocked out.

Can you give an example of how this occurs?

I will give the case of meat from EU, and milk. Let’s say the milk and meat from Denmark. When it comes to Africa, and specifically let me now talk about Nairobi supermarkets. You go to the supermarkets to buy it, you find that it is packed tinned, in a nice tin, and it is well labelled. It has been cooked. It has struggled all the way from Europe into Africa. And when you compare the price of beef coming from Europe to Nairobi with ours, ours you buy from a butchery, it has not been value added like the one you are getting from Europe. You have to take it home raw, wash it, cook it. So finally ours becomes uncompetitive in our own domestic market. The production costs of beef from the cow in Europe to the butchery and to the packaging etc, all that process is subsidized by European Union. Ours has no support at all. Farmers have got to pay from their own pockets.

Kenya produces milk. Is this an issue with milk as well?

The milk that comes from Denmark, once it starts flowing into Africa and into Kenya, considering that Kenya in the region is the biggest producer of dairy products, that will mean that our small-scale farmers who are dependent on daily farming will lose their market. It will mean unemployment, families that are dependent on dairy losing on their livelihood, and loss of government revenue of our countries.

Why are these agreements being negotiated in a way that is not beneficial to African farmers. Is there a historical context to this problem?

These negotiations are a matter of who is stronger. Unfortunately, our negotiators in the ACP countries are not as strong as their counterparts in the EU. The negotiating sessions in Brussels can go on for days; there are so many sessions and every session needs several people to negotiate. A country in Africa has only two or three negotiators and there are about twenty sessions running. Once those sessions have started, they don’t stop. Our African lead negotiators sign agreements in which they have not participated in the negotiations. Then there are a lot of tricks that are used. Like recently, Kenya was arm twisted into signing the EPA which is crazy because the Europeans have not been able to get certain preferences in WTO, so what they failed to get in WTO, they are now working to get under EPA.

Like this issue of negotiating for subsidies in the WTO. The WTO is global and there are many countries like India and China that have been pushing for the withdrawal of farm subsidies. The Europeans found it easier to bring this issue to EPA negotiations because there the majority of the countries are from developing countries and very few are developed. The LDCs can easily be twisted so they are able to get what they failed to get from WTO.

Why did Kenya sign the EPA and yet Tanzania and Nigeria have avoided signing it?

EPA negotiations are done in blocks. Kenya comes under the East African Community (EAC) block. In EAC, Kenya is supposed to be a developed or developing country. The other four, Uganda, Tanzania, Rwanda Burundi, are Least Developed. In the EPA negotiations, there is a clause known as EBA which stands for ‘Everything But Arms.’ In this clause, the LDCs are allowed to export everything but arms. Kenya, being a more developed country than the others (and this is a measure given by World Bank), was restricted.

The other twist that was used; Kenya exports a lot of flowers and horticultural products to Europe. The negotiations had been going on for a long time and were getting nowhere. Our negotiators were standing strong but then the EU gave Kenya a deadline to sign the EPA, otherwise the Kenyan horticultural produce to Europe would face tariffs. Among those products going to Europe are Kenyan flowers. The Kenya Flower Council which is responsible for the export of flowers to Europe put a lot of pressure on the government because the majority of the flower farmers are Europeans. Their interest would be serving their countries rather than Kenya. So Kenya has to go and sign the EPA, despite the fact that in the EPA, the negotiations being done in a block; one country can’t sign alone. EPA is supposed to assist in development and in integration, but they have divided the East African countries. One clause in EPA states “No party should be left worse than they were.” So these are contradictions and the EU is very good at creating these contradictions. They are leaving Kenya and the EAC worse than they were.