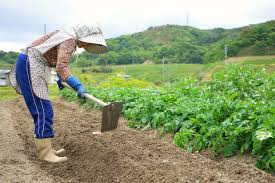 This summer, during the 201st session of the Japanese parliament, a bill to amend the Plant Variety Protection and Seed Act (PVP Act) was submitted. Hoping for an immediate vote without a plenary session or any substantive debate, the government and the ruling party reassured opposition lawmakers in advance, insisting that the bill was non-confrontational. A petition, however, by the Japan National Federation of Farmers’ Movements, Nouminren, is contesting the government’s amendment move. [1] With a number of prominent figures also speaking out against it, farmers and civil society opposition has been able to postpone the amendment procedure temporarily. But what lies behind these efforts to amend the PVP Act?

Since World War II, Japan national and local governments have played a major role in breeding rice varieties and other major agricultural crops as well as in their distribution to farmers through agricultural cooperatives and other organizations. In addition to rice and other major crops, public varieties are still predominant in the region’s mainstay fields, such as potatoes in Hokkaido and sugarcane in Okinawa.

Despite this system becoming so dominant to it stunts the development of indigenous seed varieties and seedlings traditionally grown by local farmers, the system has nevertheless allowed each prefecture to produce and provide a stable supply of culturally and climatically appropriate seeds and seedlings for their regions.

In November 2017, a notice was sent to local governments by the Ministry of Agriculture (MAFF) that Prefectures’ roles were providing private companies the know-how of seeds production and management and that when the time came, these private companies would be taking over. [2] Very soon after, the time “came” and the government decided that seed management should be transferred from the public to the private sector.

In April 2018, in another major move against the public management of seeds, the Seed Act for Major Crops was abolished. The Act had until then held the national and local governments responsible for the stable production of major crop seeds: rice, wheat and soybean. To ensure that no shortages of seeds for major crops would occur, local governments were required to create annual plans. This act laid the foundation for post-war Japanese agriculture.

The switch from public to private sector is well underway in a number of areas, including wholesale markets, water supply, forestry and fisheries, as well as health care, education, and welfare. The amendment to the PVP Act cannot be separated from this context.

The Agricultural Plant Variety Protection and Seed Act, better known as the PVP Act, came into force in 1947. It was revised in 1978 and then substantially a second time in 1998 to be compliant with the UPOV 1991 (The International Union for the Protection of New Varieties of Plants). The current revision attempt of the PVP Act, in a nutshell, aims to strengthen breeder’s rights even further. [3]

In the Act’s current form, farmers have been allowed to save seeds of the registered varieties despite some exceptions. If the amendment to the PVP Act is passed, however, farmers will no longer be able to reproduce registered varieties without permission from the breeder. Violations by individuals would result in imprisonment for up to ten years or fines for up to 10 million yen (95,000 USD), in the case of a business it could reach 300 million yen (3 million USD). The proposed amendment will also reduce the filing and registration fee for any new seed variety submitted.

Until now, the cases of PVP Act violations have been very few. Which is one of the reasons why most farmers have never heard of the PVP Act. The proposed amendments to the law will make it easier for breeders to sue farmers and seed sellers for violations of the Act. If the owner of a registered seed thinks that a certain farmer is propagating a similar seed, then the MAFF can simply compare the characteristics using a list, and if they’re the same then the farmer can be directly accused of infringing the PVP Act without any other evidence or court decision.

What would happen if all seed work went from public to private entities?

National and local governments breed 300 different varieties of rice suited to each region across Japan. This diversity is made possible because they are public projects. It would not be possible for private companies to secure profits if they breed different rice varieties for small local markets. Breeding a single rice variety can take up to 10 years and most private companies involved in the rice business market only one to a few varieties. If the seed business is given to the private sector, the diversity will be drastically reduced, and the price of rice and other crops will skyrocket.

Japan is a small country, but the climate and soils vary from north to south. In the colder regions, varieties have been developed that can withstand the climate and continue to support farmers there. Hokkaido is now one of the top rice producers in Japan, and this has been possible because of the development of varieties that are suited to the climate. Even in the same region, conditions are quite different in the mountainous regions than in the flatlands. That is why it is important to secure a wide variety of seeds.

Switching to private-sector varieties will also bring about a major change in the way agriculture is carried out. Unlike public seeds, the use of agricultural chemicals and chemical fertilizers is specified in license agreements with private companies, and their use becomes mandatory in some cases. This is the case with Sumitomo Chemical’s rice variety, “Tsukuba SD”, for example. The license agreement specifies which pesticides and chemical fertilizers should be used, and farmers are not allowed to freely decide how to grow the rice.

In Japan, producers and consumers have built a face-to-face relationship called “Sanchoku-Teikei” and this has led to the production of safer agricultural products. This relationship will be cut off by the private sector if they control the seeds. This could change the way we produce foods and even the way we eat.

Seed saving is the foundation of agriculture

The major difference between intellectual property rights for seeds and other industrial products lies in the fact that seeds are living things. The soil and climate are imprinted on the seed. Repeatedly saving seeds in the local soil will transform them into seeds that are suited to the local environment. This is where the farmer’s real pleasure lies: creating his own unique flavor.

Therefore, farm-saved seeds are essential to obtain seeds that are suited to the region. Farm saved-seeds are not just copies but living organisms, and they are constantly changing. As many farmers multiply their own seedlings, new varieties may be born. This is how seeds and seedlings have developed over a long history. Seed savings by farmers has been the act of breeding new varieties.

In the case of sugarcane, those who sell the seedlings do not have the production and supply capacity to meet farmers’ needs. The same is true for potatoes and strawberries. In such cases, self-propagation is essential. In other words, seed saving is an important process for modern Japanese agriculture that cannot be lost.

Why does the Japanese government want to ban seed saving now?

Japan ratified UPOV 1991 in 1998 but seed saving of registered varieties has been allowed until now. Since ratifying UPOV 1991, Japan has been ruthlessly pulling developing countries into UPOV with its FTAs, including trying to change the scope of other countries’ patent laws to give Japanese corporations more power over biodiversity, although some of these attempts were successfully resisted. [4] In 2007, Japan initiated the set up of The East Asia Plant Variety Protection Forum. Its membership consists of the 10 ASEAN countries (Association of Southeast Asian Nations) plus China, Japan and South Korea with Japan serving as secretariat. Its main goal: to ensure that all of its members join UPOV and harmonise their plant variety protection laws. [5] However, the Trans-Pacific Partnership Agreement (CPTPP), enacted at the end of 2018, requires the ratification and strict implementation of the UPOV 1991 Treaty, and the revision of Japan’s PVP Act should be seen as part of the deregulations made by the Trans-Pacific Partnership (TPP).

In a report in 2018, MAFF concluded that Sakata and Takii, two of Japan’s biggest seed corporationsy are among the world’s top 10 seed companies and that while the domestic market is not expected to grow, international competition for seeds and seedlings is expected to intensify. Reason for which, they conclude, it is important to expand their exports and facilitate their overseas activities. Japan is among the countries strongly advocating for the strengthening of breeders’ rights under the TPP. [7]

The percentage of new seed registrations by foreign corporations has been steadily increasing in Japan. It accounted for 36% of the total seed variety registration in 2017. The ministry has been reassuring that there is no need to worry about the high ratio of foreign corporations because most of them are mainly flower producers and only a few are food-related. But this is just a reflection of the current situation where private companies are forced to concentrate on flowers. Officials says that only a small number of varieties will be targeted by the amendment, but this is highly misleading, as over five thousand seed varieties will be affected. The revision of the PVP Act may encourage multinational companies to expand their presence in Japan, not only in flower seeds, but into fields hitherto occupied by farmers and the public sector.

Towards the preservation of local and traditional seeds

As the world becomes more dependent on the tiny number of seed varieties produced by corporations, there is an increased risk of food insecurity due to pests and diseases. Movements to create local seed banks and to increase the number of valuable native species have emerged in many parts of the world.

In South Korea, local governments are increasingly promoting the conservation and use of local traditional species. In recent years, a noteworthy ordinance known as the “Local Food Promotion and support Ordinance”, was carried out in many municipalities in Korea. The ordinance not only supports the saving of local seeds, but also promotes the use of agriculture produce grown from these seeds in school lunches and hospitals. Crops grown locally from these seeds are certified as “local foods” and are sold in local food stores and promoted in local markets. A Local Food Council has been formed by local citizens and NGOs, as well as farmers and food retailers to develop a policy on food and plan the promotion of local foods. [8] The Korea-U.S. Free Trade Agreement has hurt South Korean agriculture, but these policies have rallied local farmers. School lunches in most regions of Korea now serve organic rice. This success story is one that could serve as inspiration for Japan.

Local movements that support organic foods have started to grow throughout Japan and the voices demanding organic school meals is getting stronger. These movements can bring about a turning point in Japan’s agricultural policy. What we need is a local food system that protects our lives and the environment, and not the revision of the PVP Act.

Since the Seed Act for Major Crops was abolished, more than 20 local governments covering almost half of Japan have passed a Major Crop Seeds ordinance, to ensure the continuation of stable production of major crop seeds. Stopping the revision of the PVP Act is not enough. We need a policy that is based on a major shift from industrial agriculture to agroecology by small farmers. For this to be possible Japan must pull out of TPP and other similar FTAs.

[1] Nouminren is a member organization of La Via Campesina