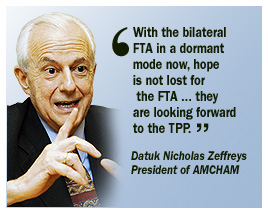 "With the bilateral FTA in a dormant mode now, hope is not lost for the FTA ... they are looking forward to the TPP," he said in an interview with Business Times.

The US-Malaysia FTA, which concluded eight rounds of discussions since 2006, was left dormant when the US Administration changed more than a year ago.

"A multilateral approach would probably be less demanding and one which is more of new global standards. It will be in Malaysia’s interest to be part of the Trans-Pacific pact as Malaysia wants to be part of the global change. Sometimes the politics of (an) FTA obscures the needs of change."

Since President Barack Obama’s announcement in Singapore in November on Washington’s willingness to talk about joining a regional pact, there is interest to expand the TPP from four to eight members with the inclusion of Australia, Peru, Vietnam and the US.

Formerly known as the Trans-Pacific Economic Agreement or P4, the agreement between Brunei, Chile, New Zealand and Singapore was concluded in 2005.

Describing how difficult it would be for the US-Malaysia FTA to get past the Congress in the absence of a fast-track authority at this stage with all the political issues at hand, Zeffreys said it could be one of the reasons for the US Administration to push for the multilateral pact.

So far Malaysia has not given any indication on whether it will join the TPP.

In the absence of an FTA, Malaysia still remains an important trading partner to the US with which it enjoys a trade surplus while the US ranks as a top investor in Malaysia.

Many of the US multinational corporations (MNCs) like Intel own facilities in Malaysia.

"While Malaysia is a desirable place to do business, the biggest concern we have is we cannot find engineers, technical and IT (information technology) people. The future is all about fierce competition for talent."