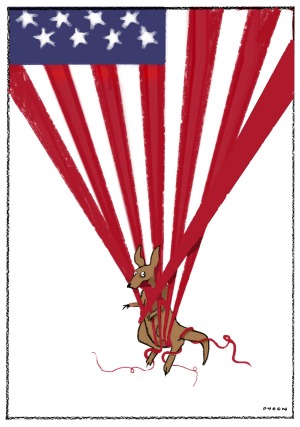 Now Malcolm’s sucked in. Hot on the heels of his predecessor, who labelled the China-Australia Free Trade agreement an "export agreement" (when his own modelling showed it would boost imports more than exports), and claimed it would create hundreds of thousands of jobs (when his modelling said it wouldn’t even create tens of thousands), Turnbull says the 12-nation Trans-Pacific Partnership will be a "gigantic foundation stone" for Australia’s future.

Pressed by an eager Neil Mitchell on Radio 3AW last week for details about the jobs it would create, he said: "More jobs, absolutely. Australian jobs depend upon open markets and free trade".

Which is a pity, because the only economic modelling we have shows it won’t create jobs. It’ll boost the Australian economy (slightly) by shifting workers away from some jobs towards others, but it will replace rather than add jobs, in the same way as things that are modelled usually do.

Our own Productivity Commission is itching to model the effects of the Trans-Pacific Partnership. It’s the sort of task it was set up to do. But for some reason governments don’t ask it to, so in this case we have to rely on the work of the prestigious Peterson Institute for International Economics in the United States. It is a supporter of the TPP. One of its blog posts is called "The Case for TPP". Another is titled: "A Convincing Case for Passing the TPP". Yet it finds the economic benefits are slight.

The effect on employment is zilch. "Expecting normal US employment then, we do not calculate any increase in the number of people at work," the authors say.

Some countries do much better. Japan boosts its income by 2 per cent, according to the model; Malaysia by 5.6 per cent; and Vietnam by 10.5 per cent. But Australia fares much the same as the US. Our economic boost after 10 years is 0.5 per cent. Our manufacturing and mining industries shrink as a result of the deal and our agricultural and service industries grow. The net effect isn’t big.

Free trade agreements give us special access to markets that others don’t have. Whereas other countries would face tariffs or quotas if they attempted to sell to TPP members, as a member country we would face lower or zero tariffs. We would be inside the castle rather than out, a bit like members of the European Union.

And by cutting our own tariffs (albeit for imports from inside the castle rather than out), we would get cheaper goods. Of course we could (and should) cut all our tariffs, but that wouldn’t be playing the trade agreement game. We wouldn’t then be able to offer privileged access.

And that’s where the problems start. Treating outsiders as worse than importers stuffs up trade. Here’s an example. Under the TPP, Japan gets special access to the US car market, but only if its cars are "Japanese". More than a certain proportion of Chinese parts, and there’s no special access. So Japan is discouraged from sourcing parts from the most efficient supplier. It means that, like most so-called "free trade" agreements, the TPP is anti-trade. A study of the US-Australia agreement 10 years on found it had cut rather than boosted trade with the rest of the world.

Much of the TPP deals with services. It’ll be easier for Australian-registered architects, lawyers and engineers to get work in other TPP countries, just as it’ll be easier for professionals from those other countries to bid for work here. It’s the part of the agreement Trade Minister Andrew Robb describes as "truly transformational".

But it comes at a cost. The cost is standardisation. In almost every case the TPP nations will be locked into the US way of doing things and denied the freedom to move to anything else. Copyright is an example. Right now the Productivity Commission is examining whether Australia’s copyright term really needs to last until 70 years after the death of the author. Regardless of what it finds, we will be locked into 70 years by the TPP (as well as by the US-Australia Free Trade Agreement). When Robb says the agreements require no changes to our intellectual property laws, he is telling only half the story. They also prevent changes to our intellectual property laws. They lock us into American standards.

We managed to escape a US demand that we give drug manufacturers longer monopoly rights that would have cost our Pharmaceutical Benefits Scheme $100 million a year, but the agreement has locked us into the monopoly rights we do grant. Our rules will be overseen by a TPP Commission to prevent backsliding.

And we are locked into a US-style investor-state dispute settlement scheme that will allow foreign companies (other than tobacco companies) to sue our governments in extraterritorial tribunals.

US-style rules will also be imposed in a range of ways we would probably support. Labor laws in the TPP states will have to outlaw child slavery, environmental laws will have to fight wildlife trafficking, and so on. To prove we are open for e-commerce, we will be unable to pass laws requiring Australian data to be kept within Australia.

Is it all a fair price to pay? On balance I’d say not. But then I am particularly keen on economic sovereignty. The agreement we are about to sign sells it, for not that much in return.