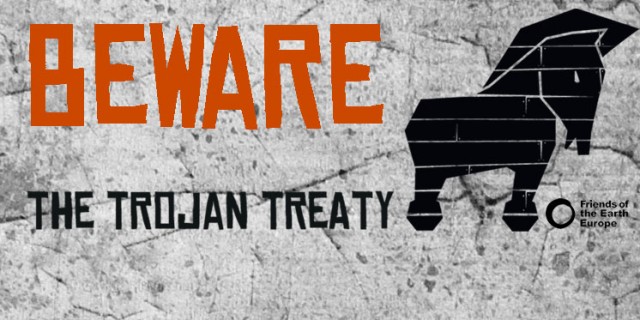 Friends of the Earth Europe and its member groups are currently warning of the dangers of the EU-US trade deal with a giant inflatable Trojan horse touring around Europe. High-quality images of the Trojan horse are available for use here: www.flickr.com/photos/foeeurope/sets/72157647635499359/

Brussels, 29 September 2014 – Fears are growing that the proposed EU-US trade deal (known as TTIP) will lead to food contaminated with genetically modified organisms (GMOs) being allowed into Europe for human consumption, despite public reassurances that food safety standards would be maintained [1].

Analysis of the text published Friday (26 September 2014) from recently completed trade negotiations with Canada – seen as a template for the US trade deal – shows that the EU has already agreed to co-operate with Canada, allowing low levels of GMO contamination in food and seed [2]. In addition, a leaked letter from the EU’s former food safety chief shows a willingness to increase imports of GM rapeseed as part of the Canadian trade deal.

European citizens – who have repeatedly voiced their objections to GM food – are currently protected from GM contamination in imported food and farmers’ seed by the EU’s “zero tolerance” law. TTIP, if agreed, would be the biggest free trade deal in history, and depends largely on reducing safety standards and laws determined to be problematic for industry. US negotiators and industry lobbyists have been pushing for weaker rules on GM imports, arguing that the “zero tolerance” rule is a barrier to trade, and damages business for US exporters [3].

They want the EU to allow imports of food and seeds that are mixed with GM food or seeds, even in cases where the GM material has not been authorised as safe in the EU. This would mean farmers and citizens would not know if the food or seeds they were buying contained GMOs – and Europeans could be eating unauthorised GM ingredients which had not been through any form of safety check.

Friends of the Earth Europe food campaigner Mute Schimpf said: “Facing hostile public and political opposition to GM foods, the biotech industry is using their lobby power in this Trojan horse trade deal with the US to open up the European market to foods contaminated with GMOs. This is the thin end of the wedge in the campaign by industry to force GM foods into Europe.”

Friends of the Earth Europe argues that the EU’s right to protect the environment and citizens is enshrined in European treaties and cannot be simply signed away through a trade deal. The green group is warning that even low levels of GM contamination pose a threat to farmers, crops and the countryside, and say that changes to the certification process could open the floodgates to increasing levels of GM imports.

Mute Schimpf added: “Once Europe has accepted low levels of GM contamination, there is a real risk that the existing protection will be whittled away. This trade deal agreed with Canada shows that the EU negotiators are too happy to trade away citizens’ rights and environmental protections in order to benefit industry.”

[2] The text of the Canada-EU Trade Agreement shows an agreement on biotech was reached to promote faster approval processes for biotech products; co-operate internationally on issues related to biotechnology such as low-level presence of genetically modified organisms; and “regulatory co-operation to minimize adverse trade impacts of regulatory practices related to biotechnology products”. Also see page 442 http://trade.ec.europa.eu/doclib/docs/2014/september/tradoc_152806.pdf as well as a letter from Commissioner Borg about faster approvals for Canadian rapeseed in the EU-Canada deal, http://www.scribd.com/doc/239784824/Leaked-EU-Side-Letter-on-GMOs-in-CETA

[3] US trade representative reports show that the US priorities are for better market access for US biotech products, a faster EU authorisation process for GM crops, the removal of various ‘trade barriers’ which limit imports of GM crops to the EU and a streamlined process between authorities on both sides of the Atlantic. See briefing for more details: http://www.foeeurope.org/sites/default/files/gm_food_eu-us_trade_deal.pdf