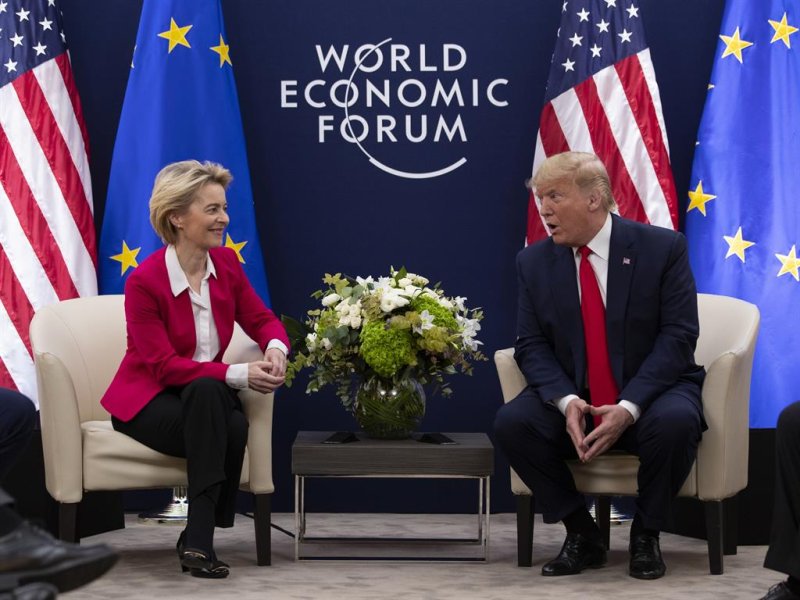 US President Donald Trump and new EU Commission President Ursula von der Leyen said on Tuesday that they are working towards agreeing a US-EU trade pact, as both sides seek to reduce bilateral commerce tensions.

The United States and European Union have since 2017 been seeking to work on a trade deal, but efforts have stalled.

Trump’s meeting with von der Leyen on the sidelines of the World Economic Forum in Davos, their first since she took office, indicated both sides want to find a new momentum with the White House saying it now expected "tangible progress".

"We’re going to talk about a good trade deal. We’ll be discussing other things also," Trump, accompanied by top economic advisors including Wilbur Ross and Robert Lighthizer, told reporters as the meeting began.

A trade deal "is something that we all want to be able to make," he added.

Von der Leyen said she was looking forward to working with Trump, saying Americans and Europeans are "good friends".

The EU commission said after the talks the two sides would meet "soon" for new talks in Washington.

"I am convinced that we can engage in a positive US-EU agenda in trade, as well as on technology, energy and much more besides," von der Leyen said in a statement.

Trump joked he’d heard that the "highly respected" von der Leyen is "a very tough negotiator, which is bad news for us."

But the White House was positive after the meeting, saying in a statement that Trump and von der Leyen "agreed that the United States and the European Union need to work together to confront global challenges such as China’s unfair trade practices and telecommunications and energy insecurity."

"President Trump reiterated the importance of free, fair, and reciprocal trade, and that the United States expects tangible progress toward a United States-European Union trade deal in the near future," the White House said.

Trump also discussed a trade deal with Simonetta Sommaruga, the president of Switzerland, which is not an EU member, at a separate meeting. "They want to do a deal and we’ll see what we can do," he said.

Sommaruga said she would also discuss global warming, something which Trump has frequently cast doubt on, despite the nearly unanimous agreement of scientists around the world that the phenomenon exists and is accelerating.

"I think it’s worth also to talk about," she said.

The talks with the Europeans came shortly after Paris announced a truce in its tussle with Washington over plans for taxing US technology companies earning revenue in France. Trump had threatened to hit back with tariffs.

French Finance Minister Bruno Le Maire, speaking before a Brussels meeting with EU counterparts, said President Emmanuel Macron and Trump had talked and "agreed to avoid all escalation between the US and France on this digital tax issue."

A French diplomatic source said the French and US leaders, who spoke by telephone on Sunday, agreed to give negotiations a chance to avoid "a trade war that will benefit no one".

Trump said Tuesday that he "is very happy with the result."

Washington has also moved this month to ease tensions on other trade fronts.

The US Senate this month voted to approve a new trade agreement linking the United States, Canada and Mexico. The United States and China also signed a long-awaited, if partial, deal to ease trade frictions.