“The Government of the Republic of Korea… and the Government of the United States of America… recognizing their longstanding and strong partnership, and desiring to strengthen their close economic relations… [seek] to reduce or eliminate the barriers to trade and investment… [and] to avoid creating new barriers to trade or investment between their territories that could reduce the benefits of this Agreement.” This was the goal of establishing a bilateral free trade zone as elaborated in the preamble of the Korea-US Free Trade Agreement (KORUS-FTA), which took effect on 15 March 2012. 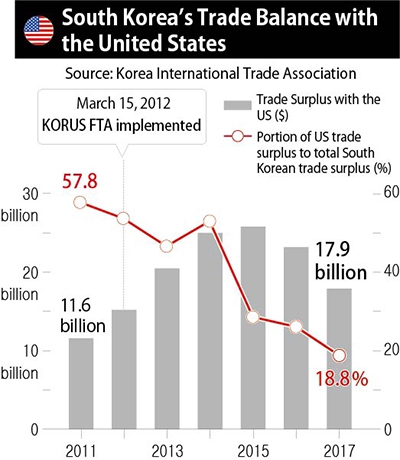 Now that the KORUS-FTA has been in effect for seven years, the “logical exercise of the unilateral power of the US’s massive economic bloc,” which was a subject of criticism and concern by activist groups when the agreement was signed more than a decade ago, is becoming a reality and placing the agreement itself in jeopardy. The FTA that “the two countries reached as partners in voluntary economic cooperation” is turning out to be completely helpless in the face of the Trump administration’s indiscriminate erection of trade barriers in the areas of steel, washing machines and automobiles.

“Trump’s unilateral imposition of import restrictions on South Korean products is revealing the vulnerabilities of the KORUS-FTA, which has accomplished absolutely nothing. At the time of the negotiations in 2007, the agreement to open markets to a great extent to the US’s massive economic bloc was both advantageous to South Korean exports because of the size of the American market but also made it possible for the US to push us around because of its asymmetric strength. Trump’s actions are showing the limitations of that,” said Kim Yang-hui, a professor of economics at Daegu University. 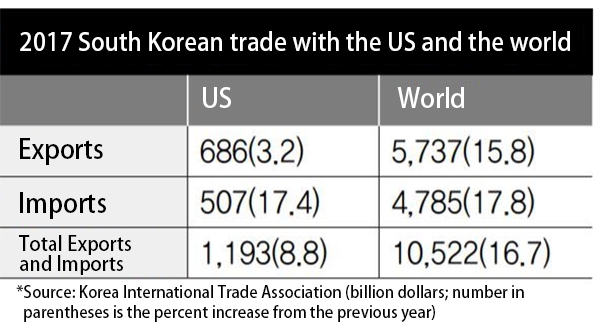 Since Trump took office, the US has been arbitrarily imposing import restrictions on steel and chemical products. As of the end of 2017, a total of 31 safeguards, anti-dumping measures and other import controls (including those being investigated) had been imposed by American trade authorities on South Korean products, eight of them last year.

Even before the imposition of a 25 percent tariff on imported steel based on Section 232 of the Trade Expansion Act, South Korean steel had been seriously harmed by anti-dumping protectionist measures. In the case of oil country tubular goods, oil pipelines and hot-rolled steel sheets, for which anti-dumping investigations began in 2013, 2014 and 2015, respectively, the value of exports to the US decreased from between US$600-800 million before the import controls to a yearly average of US$300-600 million in 2016 and 2017.

While exports of South Korean products to the US have been blocked, imports of American products such as beef, pollack and natural gas have been surging, causing South Korea’s trade surplus with the US to fall sharply from US$23.2 billion in 2016 to US$17.9 billion last year. There are even indications that the South Korean government and industries are taking steps to reduce export volume to the US and to increase imports of American products to lessen the risk of Trump withdrawing from the KORUS-FTA altogether. This suggests that an agreement originally designed to expand bilateral free trade is being twisted in a bizarre direction.

Calls for South Korea to join the Trans-Pacific Partnership

While the US is South Korea’s partner in the KORUS-FTA, it is not feasible to respond to the US solely through the framework of bilateral negotiations. In order to normalize the trade order with the US and achieve a balance of power, ex

perts argue, South Korea should also seriously consider joining the Trans-Pacific Partnership (TPP), which was recently signed by 11 countries, led by Japan, after the US dropped out of the negotiations.

“No matter how much we voice our grievances and try to deal with the US, they’re not going to budge. There are reports that the US is cautiously considering participation in the TPP at a later point, and if that’s the case, we need a strategy of joining the TPP, too, so that we can join forces with all the other members to jointly respond to Trump and counter him inside that framework,” Kim Yang-hui said.

As an agreement that advocated “a balance of mutual and reciprocal interests” is devolving into an asymmetric and unbalanced game, the South Korean government recently finished drafting a “KORUS-FTA implementation assessment report” according to the regulations of the Trade Procedure Act.

“We’re planning to brief the National Assembly at the end of March. The report, which goes for hundreds of pages, contains a comprehensive review of the effect that the agreement has had on the South Korean economy and industry over the past six years,” said a senior official with the Ministry of Trade, Industry, and Energy.