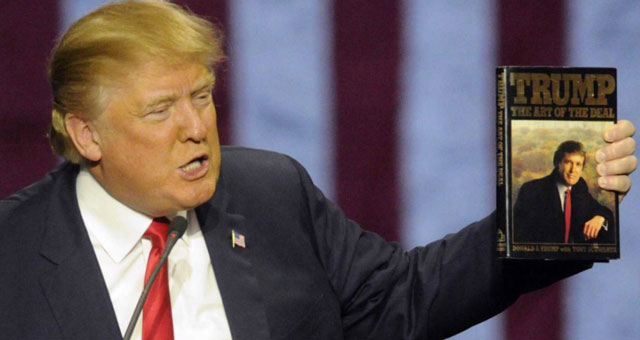 It’s vital for Moon administration to protect South Korean interests in upcoming negotiations The Art of the Deal by Donald Trump and Tony Schwartz One achievement that U.S. President Donald Trump is said to feel personally proud of is his book, The Art of the Deal. His affection for this book, written when he was in his 40s, is such that it is not a stretch to say that it is his favorite book, second only to the Bible (if his campaign speeches are to be believed). There were several passages that struck me for the insight they provided into Donald Trump’s outlook on life.

“Deals are my art form…I like making deals, preferably big deals. That’s how I get my kicks.”

There is also a passage written about the time he was buying large shares of Holiday Inn stock, about how Holiday Inn had to pay the price for its shaky business management. Trump writes that Holiday Inn could not avoid taking action if they didn’t want the company to change ownership, but also that, as it was their business, it was not something he was concerned about. He adds that he merely enjoyed the deal as he watched them exert themselves.

To Trump, deals are a type of game. And as the president of the world’s only superpower, the types of deals have changed, from real estate deals to trade agreements with other countries. The South Korea-US renegotiation is one example.

Trump’s reasons for treating the KORUS FTA as the target for a deal are based on the fact that the US has a high trade deficit. In a phone call with President Moon Jae-in on August 7, Trump described South Korea as a great ally and friend, and said that the US was spending colossal amounts of money on defense for the sake of its alliance with South Korea. He called for revisions to the KORUS FTA, however, saying that it was necessary to rectify the trade deficit and to proceed as fair and equal trade partners.

Although it had been an emergency call for the purpose of responding to the North Korean nuclear crisis, Trump brought up the issue towards the end of the conversation. It was almost as though his instincts as a businessman had kicked in. In others words, what he meant was that since the US had made “sacrifices” for the sake of security, South Korea should make concessions when it came to the economy.

With the special session of the Joint Committee of the KORUS FTA coming up on Aug. 22, I would like to make a few requests of the government. First, keep the security issue separate from trade. In his phone call with Trump, President Moon said, “Because a considerable amount of the defense budget will be spent on purchasing advanced weapons from the U.S., I believe this will help counterbalance the US trade deficit with South Korea.”

At first glance it does not sound like an unreasonable plan. However, attempting to resolve the trade deficit through the import of advanced weaponry will cost an astronomical sum of money. As it is, our purchases of weapons from the US is already excessive. As President Moon pointed out, although we have a trade surplus in goods, we have a deficit when it comes to services, and we also invest greater sums of money. These economic arguments must also be part of our response.

Second, we must not engage with Trump’s characteristic intimidation strategies. When you observe the process with which he pushes for certain policies, he has always used extreme rhetoric and opinions in an attempt to threaten and throw the other party off balance. He pushed for an FTA renegotiation by describing the KORUS FTA as a “horrible deal” during the elections. Our response to all this has been extremely defensive. Whether by rushing to import natural gas from the US, or increasing corporate investment in the US, we’ve been intent on “gifts.” We need to stand up to him with the confidence of a party also ready to accept termination of the agreement.

Third, we also need to reevaluate the FTA from our perspective and set new policy goals. The Minister of Trade has supposedly set the goals of this special session as “expanding profit balances.” In other words, by increasing the scope of trade to achieve a new balance of profits. But this is dangerous. Even in its current form the KORUS FTA is one of the most open trade agreements in the world. We cannot leave the defenseless within South Korea vulnerable to greater harm. Rather, we need to address the “poison pill” ISD (Investor-State Dispute Settlement) clauses, which restrict public policy initiatives, and demand concessions from the US in the agricultural and service industries, including in relaxed protections for intellectual property.