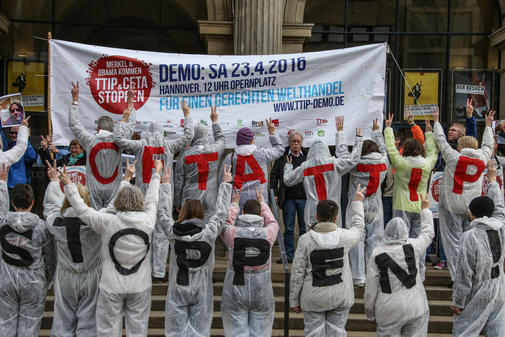 TTIP has failed – but no one is admitting it, says German Vice-Chancellor

The free trade negotiations between the European Union and the United States have failed, but “nobody is really admitting it”, Germany’s Vice-Chancellor Sigmar Gabriel has said.

Talks over the so-called Transatlantic Trade and Investment Partnership, also known as TTIP, have made little progress in recent years.

The 14th round of negotiations between American and EU officials took place in Brussels in July. It was the third round in six months.

At the time, the talks were thought to be in trouble after a number of leading European politicians expressed concern about TTIP’s effects and the US’s reluctance to accept changes to the proposed deal.

In May, cracks emerged when France threatened to block the deal.

President Hollande said he would "never accept" the deal in its current guise because of the rules it enforces on France and the rest of Europe – particularly in relation to farming and culture – claiming they are too friendly to US businesses.

“We will never accept questioning essential principles for our agriculture, our culture and for the reciprocity of access to public [procurement] markets,” Mr Hollande is reported as saying at a meeting of left-wing politicians in Paris. “At this stage [of the talks] France says, ‘No’.”

Speaking on Sunday, Mr Gabriel, who is also Germany’s Economy Minister, said: “In my opinion, the negotiations with the United States have de facto failed, even though nobody is really admitting it."

He said that during the talks neither side had agreed on a single common chapter out of the 27 being deliberated.

He further denounced the TTIP negotiations, saying the free trade deal proposed between the EU and Canada – the Comprehensive Economic and Trade Agreement (CETA) – was fairer for all parties.

Critics say one of the main concerns with TTIP is that it could allow multinational corporations to effectively “sue” governments for taking actions that might damage their businesses.

They claim US companies might be able to avoid having to meet various EU health, safety and environment regulations by challenging them in a quasi-court set up to resolve disputes between investors and states.

The UK was seen as one of the strongest supporters of TTIP in the EU, so its departure following the Brexit vote would remove one of the US’s closest allies in the talks.

Last month, Nick Dearden of campaign group Global Justice Now, said: “The TTIP negotiations were already on pretty shaky ground before the EU referendum, and now the shockwaves of Brexit are threatening to derail the deal entirely.”

“With senior political figures from France and Italy signalling that the deal is dead in the water, surely it’s time for Cecilia Malmström [EU trade commissioner] to call time on this failed corporate coup.

“The toxic trade deals being pushed by Brussels would only benefit tiny financial elites, while the ordinary people of the EU would be stripped of legal protections of labour rights, consumer standards and public services.

“If the EU is going to prevent further disintegration after Brexit, it needs to stop prioritising corporate power grabs and start addressing issues such as rising inequality and social exclusion.”

Leading opposition figures in the UK have previously said they are worried about the effect TTIP could have on the NHS.

In October last year Jeremy Corbyn, Nicola Sturgeon, Nigel Farage and Natalie Bennett all signed an appeal urging the NHS to be exempt from the deal.

Campaigners have said previously that the UK may end up with “TTIP on steroids” if it does leave the EU.

They have also warned against the controversial TTIP trade deal with the US, fearing the UK will negotiate an “even more disastrous” agreement after it leaves the EU.