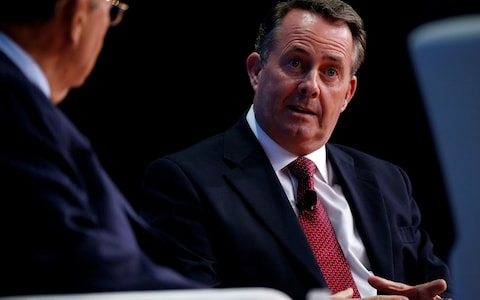 UK demands secrecy in Brexit trade talks with US

by Cahal Milmo and Paul Gallagher

The British Government has demanded total secrecy in its free trade talks with the US for a post-Brexit deal, i can reveal.

Liam Fox’s Department for International Trade (DIT) has quietly opened preliminary discussions with a team of American officials. Both sides have agreed that their talks will be classified as either “sensitive” or “confidential”, and information will be shared only among approved individuals. Nothing can be released for four years after talks are concluded, unless both sides waive the secrecy rule, according to documents seen by i. The approach will prove controversial for parliamentary scrutiny of British-American trade talks, as well as in policy areas such as food safety standards and animal welfare.

Alarm has been raised at Cabinet level that an eventual deal could lead to Britain accepting inferior welfare or environmental standards, including chlorine-washed chicken and antibiotic use in beef, as well access to the NHS for US health conglomerates. Campaigners accuse Dr Fox of imposing draconian controls on the discussions, which are considered vital to Britain’s prosperity post-Brexit. He argues that officials should be allowed to negotiate privately while policy positions are developed. Last month, the DIT agreed with its American counterparts that details of talks will be regarded as confidential “unless otherwise jointly decided”. The rules have been signed off by DIT’s director of UK-US trade policy, Oliver Griffiths, and the Office of the United States Trade Representative.

Britain asked for assurances about secrecy because the US has looser freedom of information laws. The DIT insists that some material produced by the working group will be subject to freedom of information rules. In one letter between the UK and US teams, first identified by Greenpeace and its Unearthed investigative unit, the DIT insists it has a “commitment to transparency and inclusivity”, and that Parliament, trade unions and the public will have the “opportunity to engage with and contribute to our trade policy”. But the memo adds that trade talks information can be seen only by government officials or third-party officials who “have a need to review or be advised of certain information”. It states: “Anyone given access to this information will be warned that they cannot share the information with individuals not authorised to see the information.”

Dr Fox said last month: “Consumers will want to be consulted. We don’t want to get into a situation where we’ve been with the TTIP agreement with the US and the EU where a huge amount of work is done only to find the public won’t accept it.” Dr Doug Parr, policy director for Greenpeace UK, said: “You’ve heard of a hard Brexit and a soft Brexit, but it turns out what Liam Fox really wants is a secret Brexit. It’s going to be hard to convince people that they stand to benefit from Brexit trade deals if the first thing ministers try to do is cloak them in secrecy.” DIT said the protocols agreed with the US were in line with Cabinet Office guidelines and did not supplant the Government’s duty to consider requests under freedom of information rules. A spokesman said: “The UK and US Trade and Investment Working Group discussions are focused on providing commercial continuity for US and UK businesses as the UK leaves the EU. To support productive discussions, the working group needs to exchange information in confidence. These arrangements are consistent with the Cabinet Office guidance on international classified exchanges of information.”