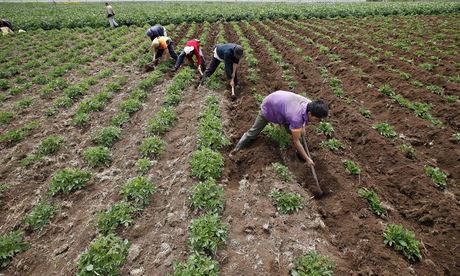 Farmers plant potatoes in Villapinzón, central Colombia. Land reform is key to the peace process between the government and Farc guerrillas. Photograph : AP

British companies will be able to sue the Colombian government in the international courts for the first time under a controversial investment treaty that critics say will make it harder for the Latin American country to carry out land reform – a key component of its ongoing peace process.

The UK-Colombia bilateral investment treaty (BIT), to be ratified by parliament on Thursday, gives investors broad protections and the ability to mount claims at private tribunals if they argue they have been treated unfairly.

The British government describes it as an important tool to foster economic prosperity in both countries. But human rights and anti-poverty groups say it gives too much power to corporations and could expose the government to costly lawsuits.

"It’s very bad for Colombia. It will give total power to the transnationals by promoting investors interests, while ignoring the wider society," said Enrique Daza, director of Colombian NGO Cedetrabajo, which works on the impact of trade agreements in the country.

Lizzie McLeod, senior policy adviser at UK NGO Traidcraft, which has protested against the treaty’s ratification in Britain, said it could allow British companies to challenge the Colombian government over its land reform programme. "It could threaten the return of 5 million internally displaced people, a critical part of Colombia’s fragile peace process," she said. "The investment treaty undermines democratic processes and the prospects of peace for the sake of UK profits."

The ability of corporations to mount claims against governments through the investor-state dispute settlement system has become a key point of tension in negotiations over a controversial EU-US trade and investment mega-deal.

The proposed Transatlantic Trade and Investment Partnership has faced fierce opposition from campaigners and some trade unions. In the UK, the union Unite says it could leave the national health service vulnerable to lawsuits from US healthcare companies if the government attempted to return services to the state.

In Colombia, the stakes are high. The struggle for land has been a cause and consequence of five decades of conflict. An estimated 5.7 million people are internally displaced – more than in any other country apart from Syria.

The government’s land reform programme has moved slowly and has been marred by reports of threats and violence. Many disputes centre on claims to land that communities were forced to abandon, and which subsequently fell into the hands of businesses.

In an action plan published last year, the UK said investment agreements should "incorporate the business responsibility to protect human rights". But the treaty with Colombia, which was negotiated four years ago but is only now up for ratification in the UK, does not include such language.

"On the responsibility that investors have, the treaty is silent," said Andrea Saldarriaga, head of the Investment and Human Rights Project at the London School of Economics.

Saldarriaga, a former arbitration lawyer, also took issue with claims that the treaty would boost investment. "The treaty might have a marginal effect but it’s not really going to change the game. Instead, it is creating unnecessary risks to the implementation of the government’s plans for the peace process."

The UK is already the second-largest investor in Colombia, after the US. More than 100 British businesses operate in the country, including Virgin, BT and Shell.

The UK-Colombia bilateral investment treaty is one of thousands criss-crossing the globe but is the first Britain will have ratified since 2009.

A motion has been tabled in the House of Lords to regret that the treaty is contrary to UK human rights commitments. This will not impact the agreement’s ratification, but could influence debate over future treaties with other countries.

Lord John Monks, vice president of Justice for Colombia, a British NGO that campaigns for peace and social justice in the country, condemned the treaty : "While British business wants to protect any investments it has in Colombia via this treaty, not one British business seems to be concerned about the interests of the Colombian people."

Once ratified, the BIT will be in force for at least 10 years, though the protections it offers to investors will extend a further 15 years after the treaty is terminated through what is sometimes called the survival clause.

The Colombian embassy in London said fostering long-term foreign investment was critical for the country’s development. "As Colombia is actively aiming to integrate itself to an increasingly dynamic global economy, the UK-Colombian BIT provides the legal framework to guarantee the transparency and protection of investments," it said.

A spokesman for the UK’s Department for Business, Innovation and Skills said the treaty’s provisions are designed to discourage frivolous investor-state disputes. The definition of an investor, for example, has been limited to exclude shell companies.

"The UK government believes the BIT will encourage UK companies to invest in Colombia, bringing consequent benefits to Colombia’s economic development," he said.