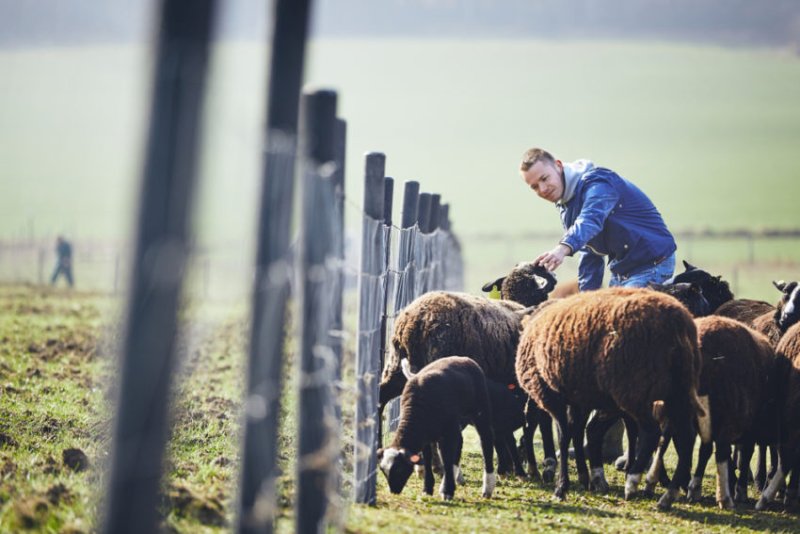 UK-US trade: New body to advise on welfare and competition in farming

Farmers have welcomed plans for a new body to advise ministers on welfare standards and fair competition in trade deals with the US and other nations.

The Trade and Agriculture Commission will make recommendations to government on how to stop the industry from being under-cut by cheaper imports and to increase export opportunities.

It follows a recent Commons rebellion by Conservative MPs over the issue.

Ex-minister George Freeman warned the new body must not be a "talking shop".

The UK is in the early stages of negotiating new trade agreements with the US, Japan and New Zealand, among others, following its departure from the EU earlier this year.

Agriculture is set to be a key battleground, particularly in the US talks, with British farmers worried that it could see a flood of cheap imports from producers with less stringent animal welfare standards.

The UK wants high-quality food imports to be subject to lower duties to encourage foreign producers to match British standards but the US is pressing for greater market access across the board.

Last month, dozens of Conservative MPs defied the whip in calling for tougher safeguards on food standards to be guaranteed in UK law, including a continued ban on the import of chlorine-washed chicken from the US.

Announcing the new body, International Trade Secretary Liz Truss said she shared the desire of British farmers not to see their high welfare standards undermined and to be able to compete fairly in the post-Brexit world.

She said the new body would be expected to feed into policy-making on individual trade agreements and ministers would take heed of its recommendations.

The commission, whose terms of reference have yet to be finalised, would be expected to reflect the interests of consumers and producers in developing countries as well as the domestic farming sector.

"I am encouraged that the NFU supports the UK’s broad objectives in promoting free trade and shares our belief that free trade deals can open up significant free trade opportunities for the UK farming industry," she said.

The BBC’s political editor Laura Kuenssberg said the move followed a "seeming stand-off" between the trade department and Defra over how to uphold food standards after Brexit.

The NFU said it had been calling for such a step for 18 months but it would be keeping up the pressure on ministers to ensure the body had real input.

"I am very pleased that the government is taking concrete action to address the challenges of safeguarding our high food and farming standards," said its president Minette Batters.

"It will be vital that Parliament is able to properly consider the commission’s recommendations and can ensure government implements them effectively.

"The NFU will continue to scrutinise the progress of trade negotiations with the United States and other countries....so that our future trade deals work for British farmers and consumers."

Mr Freeman, one of those to rebel last month, tweeted that the body must have a "clear remit" to ensure trade deals worked in the national interest.

Opposition parties welcomed what they said was a concession by ministers although the Lib Dems said it remained to be seen whether the body would have "real teeth".

"The announcement contained no details about how this new commission will operate or how Parliament will be able to properly scrutinise any new trade deal and the effect it will have on our world-class food, animal welfare and