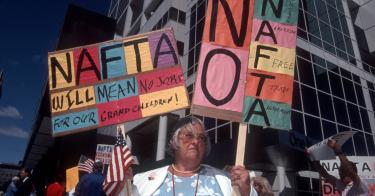 In his introduction in this volume, Gantz attributes the change in the U.S. policy to the slow progress of the European countries towards economic integration in the 1970s and the early 1980s, as well as to the increase of the European trade power and the lack of European support for a new GATT negotiating round, leading the United States to take regional initiatives. Concerns over the U.S. expansion led Europeans to agree to new multilateral negotiations while the stalemate of the Uruguay Round offered the United States, Canada and Mexico the opportunity to conclude the NAFTA. Subsequently, after the failure of the Doha Development Round, the United States saw in free trade agreements more than a second best approach to trade liberalization, an opportunity to broaden trade liberalization to the global level and influence the content of future international trade rules.8 Griffith, Steinberg & Zysman explain in that respect that “[b]y negotiating deals one-by-one with individual countries, the US was able to leverage its power, securing deeper liberalization and a more complex trade agenda than could be advanced in the [World Trade Organization] WTO, where US trade bargaining power was more diffused than in one-on-one negotiations.” Furthermore, pursuing the strategy of competitive liberalization, the United States expected that “once a critical mass of bilateral agreements were achieved, states not party to these agreements would be inclined to liberalize along similar lines in order to avoid trade and investment diversion, and to remain competitive in a global economy.”9 According to Bergsten, the United States thus hoped “to place pressure on non-members of individual free trade agreements either to join the group itself or to conclude broader agreement.”10

This change of the U.S. policy may have wide-ranging repercussions for the future international rules of trade. Already, the size of the U.S. economy and the consequent desire of other countries to become preferential U.S. trading partners11 allowed the proliferation of U.S. free trade agreements. Since the 2000s, the extension of the U.S. FTAs network along with the reaction of the European Union (EU) to the risk of losing privileged access to markets covered by the U.S. free trade agreements and the consequent “competitive attitude between the EU and the US, in terms of gaining preferential market access and extending regulatory rules to emerging countries,”12 led to the generalized shift from multilateral negotiations to plurilateral and bilateral preferential trade agreements (PTAs). Weintraub claims that “the United States over the past few years concluded as a policy matter that it should be prepared to negotiate in many forums - global, as in the World Trade Organization ... regional, as in the Free Trade Areas of the Americas ... plurilateral, as in the ongoing negotiations ... to achieve a U.S.-Central American Free Trade Area ... and bilaterally, as it did with Jordan and now with Singapore.”13 This shift to bilateralism and regionalism was interpreted as a division of labor, placing liberalization “at the level where it is easiest to achieve, for whatever reason (geographical proximity, power relations, etc.), while maintaining regulation at the global level”, an argument deduced from references to WTO rules in most free trade agreements.14 However, the proliferation of free trade agreements, apart from the risk of discrepancies between the different agreements as a result of the so- called spaghetti bowl phenomenon,15 may lead to marginalization of the WTO as a privileged forum of negotiation of international trade rules.

Along with this vertical forum shifting, the United States - and the European Union - using their increased bargaining power, introduced bilateral commitments going beyond those that their partners have accepted at the multilateral level (WTO- Plus) as well as provisions dealing with issues lying outside the current WTO mandate (WTO-Extra). The first relate to the liberalization of trade in goods and services, whereas the second relate to investment protection, competition policy, labor standards, and protection of the environment.16 To some extent, the United States traded WTO-Plus provisions in return for WTO-Extra obligations. They thus achieved with economically and politically weaker partners what they could not achieve through the WTO.17 Indeed, the U.S. free trade agreements are amongst the most prominent examples of asymmetric preferential trade agreements.18 The gains reaped by the United States include the increased access to their trading partners’ markets without them having to liberalize in return traditionally protected sectors such as agriculture, steel and textiles.19 Furthermore, the United States exported their regulatory rules in a number of areas,20 in order to further their domestic interests or respond to domestic concerns. In relation to intellectual property rules (IPRs), for example, Mercurio rightly explains that “[a]s a result of the strong and unwavering resistance” of developing countries during the Seattle and the Doha Rounds “the US has again shifted its negotiating focus and sought to use bilateralism/regionalism to increase IPRs by requiring FTA partners to implement TRIPS-Plus provisions.”21 These provisions are not necessarily beneficial to U.S. trading partners. In this volume, Tully observes that by concluding bilateral and regional agreements, the United States “is gaining greater influence over the domestic health care and drug coverage programs of its trading partners.”22 Cai adds that the recent U.S. free trade agreements introduce regulatory coherence obligations that promote a uniform OECD-inspired model of regulation that is already part of the U.S. regulatory toolbox, thus extending its reach to the U.S. trading partners.23

Amidst the continuing stalemate of the global trade negotiations, one wonders what the effect of the proliferation of U.S. free trade agreements for the future international rules of trade will be. Will the densification of U.S. - and EU - PTAs networks lead to the disintegration of the WTO or will their rules be absorbed by future WTO agreements? Panezi in this volume explains that preferential trade agreements were formally allowed by the WTO on the assumption that “more liberalization, even if it occurs on the bilateral level, is better than no liberalization at all.”24 Sapir by contrast, underlines that U.S. and EU preferential trade agreements present a systemic challenge to the WTO25 and WTO officials themselves have voiced concerns over the risks of their proliferation.26 The densification of these networks could lead to the establishment of plurilateral rules involving the United States, the European Union and their respective partners or even to the creation of a U.S./EU-led trade organization with WTO rules remaining a second best choice for trading with the United States and the European Union. The Trans-Pacific Partnership Agreement (TPP) and the TTIP, as Pitschas in this volume explains, represent “a watershed for the multilateral trade system, just as TPP,”27 and may be the first steps towards that development.

Nevertheless, one cannot exclude the possibility of a transition from bilateral and plurilateral to multilateral rules, as was the case with GATT.28 If, as Sapir claims, one of the main objectives of the TTIP “is for the EU and the US to change gear and adopt a more cooperative attitude at a time when their global economic leadership is more and more called into question by the emergence of new economic powers,”29 the TTIP may then constitute the Trojan horse for them to regain control over multilateral trade negotiations. Some of their trading partners will voluntarily align with them whereas others will be coerced towards the multilateralization of what they have already agreed on the bilateral and the plurilateral levels, a strategy that has been used before in the case of TRIPS.30 The competitive liberalization strategy, envisaging that non-partners will join the group or conclude a broader agreement, accommodates both developments. Last but not least, one should not underestimate how U.S. free trade agreements may serve as models for future international trade and investment rules. In this volume, Monardes, amongst others, points out the influence of NAFTA in the free trade agreements concluded among Latin American and between Latin American countries and Asia Pacific countries.31 Schill and Bray explain that NAFTA and the U.S. Model Bilateral Investment Treaties have been the source of inspiration of the recent Mega-Regionals and other important trade and investment agreements.32 Finally, Voon and Sheargold observe the likelihood of TPP influencing many current and future PTAs’ negotiations.33

The shift from multilateralism to regionalism, plurilateralism and bilateralism in international trade negotiations, amongst others, changed the focus of the academic debate. The challenge of free trade agreements rather than of the WTO now occupy most of the discussions of the relevant epistemic communities all over the world; a trend that is likely to intensify since the conclusion of the TPP and the advancement of the negotiations on the TTIP. This special issue of the British Journal of American Legal Studies, conceived just before the unexpected conclusion of the TTP negotiations, responds to the need for research on the recent U.S. free trade agreements. It does not intend to provide a comprehensive analysis of the problems related to the rise of these agreements or of the content of the agreements themselves. Its aim is rather to focus on selected issues arising from the different obligations included in these agreements. Twelve distinguished international trade and investment law scholars from accros the world were invited to explore key aspects of particular U.S. free trade agreements. Contributors were not restricted by a research agenda, their independence was respected and hence their approaches do not necessarily converge, even though all share similar concerns in relation to the expansion of the U.S. free trade agreements.

In his introduction David A. Gantz explores the historical changes in U.S. trade policy and the shift from the support of multilateral rules to the embracement of regional and bilateral trade agreements. Christian Pitschas focuses on the on- going negotiations for the TTIP and on the possible impact of the TTIP on the multilateral trading system and developing countries. Tania Voon and Elizabeth Sheargold analyze the motives and the negotiation dynamics of the chapters relating to investment, services, intellectual property and regulatory coherence of the recently concluded TPP. Rodrigo Monardes analyzes the liberalization of trade in services under the NAFTA negative list approach on the basis of the Chile- United States Free Trade Agreement. Relying on the experience of the Australia- United States Free Trade Agreement, Stephen R. Tully discusses the standards of intellectual property protection and their impact for U.S. trading partners. Haydn Davies analyzes the effects of investor-state dispute settlement mechanisms of NAFTA, the European Union-Canada Comprehensive Economic Trade Agreement, the TTP and the draft TTIP on national environmental rules and, in particular, on the precautionary principle. Stephan W. Schill and Heather L. Bray focus on the influence of NAFTA and U.S. practice on the substantive rules governing investor- state relations of the Mega-Regionals. Jaemin Lee explores the dispute settlement’ provisions of the free trade agreements concluded between the United States and Korea, Peru, Panama and Colombia. Using the TPP as her primary example, Phoenix X. F. Cai analyzes regulatory coherence obligations and the role of international standard setting organizations. Maria Panezi, finally, examines the relation between preferential trade agreements and WTO rules with particular focus on the problem of transparency and the limits of the Doha Transparency Mechanisms.

This special issue of the British Journal of American Legal Studies is the outcome of a collaborative effort. The editor would like to thank David A. Gantz for his input and suggestions during the discussions on the content of this volume as well as all contributors for generously agreeing to participate in this project respecting strict deadlines. The volume would not have been completed without the assistance of Daniel Gough who adapted the articles to the journal’s reference style and Zoë K. Millman who reviewed some of the articles and made corrections to the language and suggestions of style. Special thanks are also due to Anne Richardson Oakes for her encouragement, guidance and supervision as well as for her comments and assistance in the adaptation of the contributions to the journal’s standards.