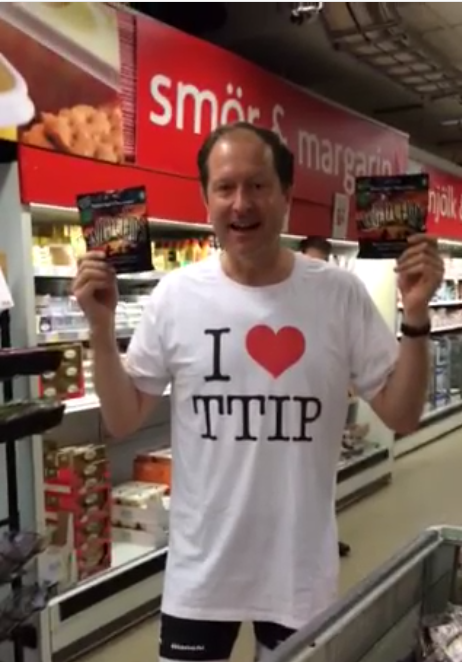 T-TRIP: US Ambassador Brzezinski is biking across Sweden to promote T-TIP, the Transatlantic Trade and Investment Partnership

Clad in bike shorts and a T-shirt that declared his love for a proposed U.S.-European Union trade deal, Mark Brzezinski, Washington’s envoy to Sweden, held up frozen packages of reindeer and moose meat in a grocery store aisle in the small town of Kumla and delivered his pitch.

If the U.S. and European Union pass a trade deal, American diners would be more likely to find the Scandinavian game on their plates, he announced. Likewise, Swedes could see more U.S.-produced food in their shops.

That down-home tactic for promoting a trade deal is one the ambassador said he found “enriching” during a 7-day, 400-mile bicycle ride across Sweden’s heartland to sell the Transatlantic Trade and Investment Partnership to small businesses, local political leaders and everyday citizens.

“I was able to talk with them about how if TTIP was passed, there’s going to be greater variety of products available to consumers, it will lower prices for many products, [and] at the end of the day it’s going to mean more money for consumers,” Brzezinski said of his grocery store stopover.

The hands-on approach is one way U.S. embassies across Europe are pushing for what would be the largest trade deal in the world. Brzezinkski’s outfit also worked closely with the American Chamber of Commerce in Sweden to help produce a series of easy-to-digest videos on YouTube describing the potential benefits of the trade deal, he said.

“This is the kind of conversation that is profoundly enriching, both in terms of TTIP and more broadly in terms of the trans-Atlantic dialogue,” Brzezinski said. “I know that my fellow ambassadors across Europe are having conversations like this. I’ve got my bike shorts on and my TTIP T-shirt on and sitting down and having an honest conversations about what this means for a small business.”

Other embassies, meanwhile, are offering cash to get the word out.

In Germany, the U.S. embassy is offering grants of $5,000 to $20,000 for activities promoting the trade deal, while American diplomats in the Netherlands have upped the awards to $24,000.

In return, German and Dutch non-governmental organizations, businesses and media organizations will be tasked with short documentaries, speaker tours or coordinated social media campaigns to tout the deal, which has been buffeted by concerns in Europe over chlorine-doused U.S. chicken and profit-fueled corporate lawsuits.

The growing opposition to the deal, fueled by the warnings of public watchdog groups, is likely driving both U.S. and EU officials to find new ways to put out a positive spin.

U.S. Trade Representative spokesman Trevor Kincaid denied any coordinated campaign among U.S. embassies but said “there is a strong story to tell, and we’re going to use every tool at our disposal to tell it.”

“Embassies are there to talk about U.S. ties to the countries they are in,” he said. “We believe that there is a very positive story to tell on TTIP.”

Opponents of the deal, however, are growing more organized too. The Brussels-based Stop TTIP will coincide a campaign this fall with the start of a European Citizens’ Initiative, which allows groups to pressure the European Commission to introduce legislation if at least a million signatures can be gathered.

The group is pressing the EU commission to introduce legislation that would recommend member states repeal the negotiating mandate they gave the commission instructing it on what to include in the deal.

The EU commission would not be bound to introduce such legislation even if enough citizens sign the petition. That said, the issues at stake have raised widespread concern. When the commission, which negotiates trade deals on behalf of the 28 EU members, sought public comment on how the trade agreement should deal with investor protections, it received a whopping 150,000 responses.

The inclusion of a controversial investor-state dispute mechanism that would allow foreign companies to sue governments over regulations that damage business has become a major talking point in the EU.

Opponents say it allows foreign investors to challenge a state’s sovereignty to enact regulations meant to protect its population.

“TTIP is really, really a hot issue everywhere in Europe,” said Ska Keller, a German member of European Parliament whose Greens political group has taken the lead in opposing the deal. “I know the commission usually says its only hot in Germany and one or two other countries, but that’s really not true.”

In the lead up to May’s parliamentary elections, Keller said her campaigning took her to multiple EU countries where “TTIP was the one issue that came up everywhere.”

“We’re not at all against trade with the U.S.,” she said. “It just should happen in a way that people from both sides profit from it — not just rich people, but ordinary people — without harming the environment.”

Although the petition her party supports is nonbinding, she said the process has provided enough leverage to halt less well-known issues, such as controversial EU water directives.

In particular, the trade deal’s potential to bring U.S. poultry into Europe has become a marquee issue among opponents, who don’t want to see grocery shelves stocked with poultry rinsed with hyperchlorinated water, a cleaning method not allowed in the EU.

And while U.S. embassy efforts to promote TTIP may gain traction in the Swedish countryside, they’re unlikely to be well received in the new EU Parliament, which shifted toward radical and trade-skeptical groups in the elections last May and has the ultimate thumbs up or thumbs down on the deal.

Centrist political groups that largely in favor of the deal still control a solid majority of the 751 seats, but it’s uncertain whether politics will drive more center-left Socialists and Democrats away from supporting a deal.

European Trade Commissioner Karel De Gucht, in his first appearance before the newly composed body, told lawmakers to “be more rational” about approaching the deal — earning only scorn from skeptical members.

“De Gucht has always been arrogant in saying, especially addressing us as Greens, that we are lying, which is not really a way to deal with MEPs when they are ones to decide about trade deals,” Keller said.

A former senior EU official said that for those members still on the fence, the trade deal is a “pretty easy and politically attractive” issue to campaign against if they need to gain political points among constituents.

TTIP “has not been very well managed by the commission and the member states” in the Parliament, the official said.

De Gucht, a Belgian, will learn if his national government still supports his continued role as the EU’s top trade official by the end of this month, but the former senior official said it’s very unlikely De Gucht will continue in his current job.

“I think the new commissioner of trade will consider this as one of the main things he has to worry about,” the official said, referring to political foment over the U.S.-EU deal.