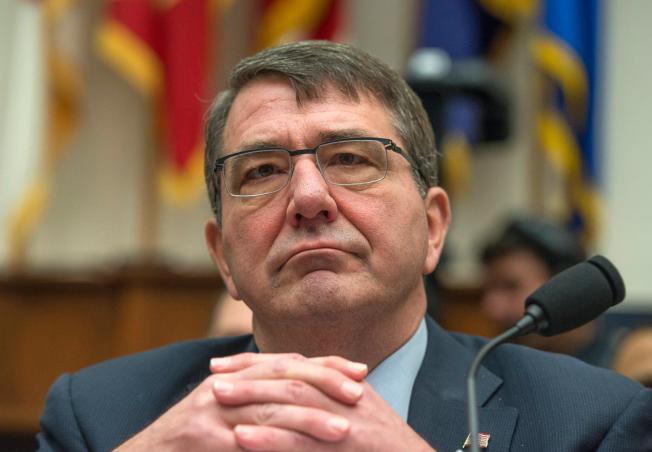 Speaking at Arizona State University, the defense chief said the defining region of America’s future is Asia-Pacific, where half of humanity will live by 2050, more than half the global middle class will reside by 2030 and defense spending is on the rise. Carter told ASU students assuring peace, prosperity and progress in the region will be their generation’s central strategic challenge.

He called on Congress to pass bipartisan Trade Promotion Authority, or TPA, so President Obama can ensure America gets the best deal with 11 other nations making up the TPP in terms of leveling the playing field :

"It would do so by requiring these other countries to adopt the standards that we hold ourselves to here in the United States, such as government transparency, intellectual property laws, a free and open Internet, environmental protections and workers’ rights. TPP would also lower barriers to American goods and services in the Asia-Pacific’s fastest-growing markets," said Carter.

The defense secretary calls TPP one of the most important parts of the U.S. re-balancing toward the region. He says passing it is as important as adding another aircraft carrier to the naval fleet.

He warned, however, that time is running out on the multi-year negotiations. Carter says countries in the region are carving up these burgeoning markets with agreements that, in some cases, are based on pressure and special arrangements, not openness and principle.

Carter, who will be visiting Japan, South Korea and the U.S. Pacific Command in Hawaii in coming days, says the United States is refreshing long-standing alliances in the region while enhancing those with India and Southeast Asia. He expresses concern about China’s opaque defense budget, actions in cyberspace and maritime behavior in the East and South China Seas.

"The U.S. and China are not allies, but we don’t have to be adversaries. A strong, constructive U.S.-China relationship is essential for global security and prosperity. Our relationship will be complex as we continue to both compete and cooperate," said Carter.

He said Washington seeks a scenario where everyone wins, continuing decades of peace and prosperity anchored by a strong American role in which all Asia-Pacific countries continue to rise and prosper, including China.

Brad Glosserman, executive director of the Hawaii-based Asia security think tank Pacific Forum, said Asian leaders view the success of the TPP as key to U.S. engagement in the region.

"The key element here is to look at it and use the word strategic because, what TPP does, it ties us and couples us more closely to the countries of the region, and our military relationships are all about the certainties that our allies have that we’re tied to them and the certainty that adversaries have that an attack on them will be seen as an attack on the United States. So, by really, really, if you will, linking us most closely economically through TPP and other economic, business, trade, political measures, we send that signal to allies and adversaries alike we are, in fact, united and, therefore, it is a key strategic piece of the United States foreign policy tool kit," said Glosserman.

Glosserman thinks the TPP’s success will hinge on domestic U.S. politics and the willingness of lawmakers of both parties to grant the president trade promotion authority. He says that will play a big part in ongoing U.S.-Japanese negotiations. TPA allows the president to negotiate trade deals giving Congress only the chance to accept or reject it without renegotiating its terms.