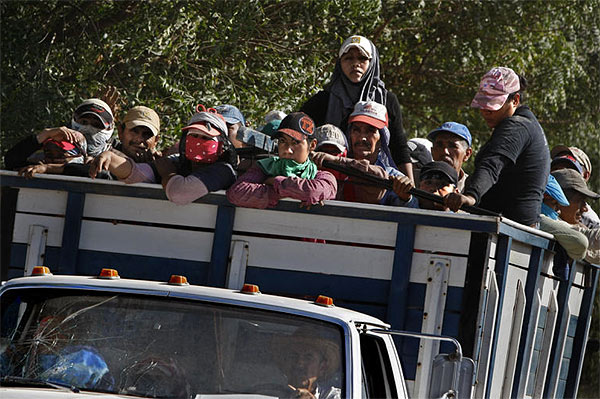 US, Mexican unions to file NAFTA complaint over labor bill

U.S. and Mexican unions will formally complain to the U.S. Labor Department on Thursday that Mexico continues to violate NAFTA’s weak labor standards, a move that they hope will persuade U.S. negotiators to push for stronger rules.

The AFL-CIO told Reuters that it and Mexico’s UNT were filing the complaint with the U.S. office that oversees the labor accord attached to the North American Free Trade Agreement as U.S., Canadian, and Mexican negotiators met in Montreal to try to modernize the 1994 trade pact.

The complaint, seen by Reuters, argues that Mexico’s proposed labor law amendments to implement constitutional reforms will violate the North American Agreement on Labor Cooperation. It seeks efforts from the United States to prevent the measures from being implemented and to demand changes to bring Mexico into compliance.

“Simply by promoting this bill, which aims to undermine the constitutional reforms, the government of Mexico brazenly violates the central obligations of the NAALC - namely to ‘provide high labor standards’ and to ‘strive to improve those standards,’” the AFL-CIO and Mexico’s UNT National Workers Union said in the complaint.

Talks to overhaul the trade deal have been dogged by U.S. threats to withdraw from the pact, but the foreign ministers of Mexico and Canada on Thursday struck an upbeat note on future negotiations.

A key complaint is that NAFTA has failed to lift chronically low Mexican wages that have steadily drawn U.S. and Canadian factories and jobs to Mexico.

The trade pact has also allowed lower health and safety standards in Mexican factories to persist, but violations of the NAFTA labor cooperation agreement are not enforceable through trade sanctions.

The U.S. Trade Representative’s office has made steep demands on automotive content to reverse job migration, but its labor proposals have disappointed unions and many Democratic Party lawmakers. The proposals stuck largely to language that Mexico and Canada previously agreed to in the Trans-Pacific Partnership, a trade deal the Trump administration has abandoned.

“What the USTR put on the table is not acceptable and won’t get the job done,” said Celeste Drake, the AFL-CIO’s trade and globalization policy specialist.

She said past complaints to the Labor Department regarding Mexico’s violation of the labor cooperation pact have not led to major change and this one may be no different, but it aims to influence the negotiations by drawing attention to Mexico’s weak record on worker rights as negotiators discuss labor issues in Montreal.

“It gives ammunition at the negotiating table to U.S. and Canadian negotiators to say, ‘Your violations on NAFTA are not in the past, they’re not over with.’”

A USTR spokeswoman could not be immediately reached for comment.

Thus far, Canada led the call for higher labor standards in the talks, including making a proposal that the United States revise its so-called right-to-work laws in many southern states that help to limit the spread of unions in manufacturing.