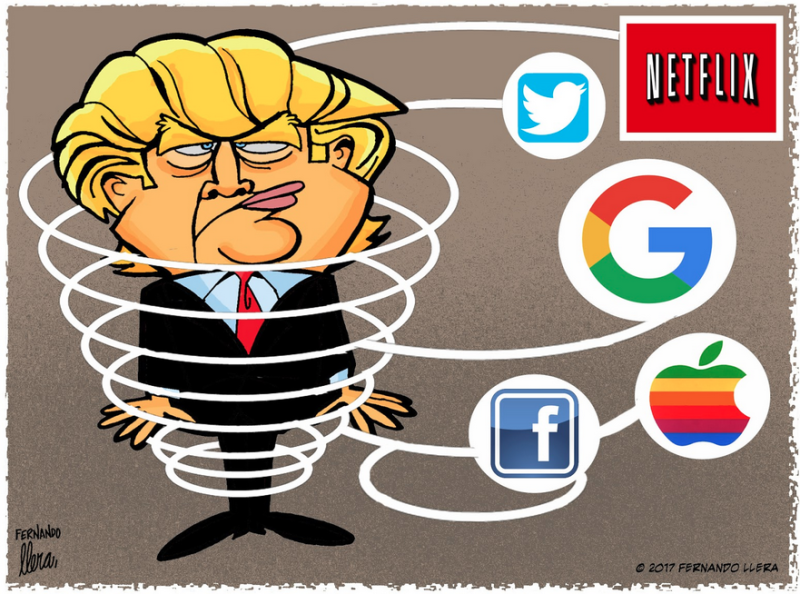 The Trump administration has begun inserting legal protections into recent trade agreements that shield online platforms like Facebook, Twitter and YouTube from lawsuits, a move that could help lock in America’s tech-friendly regulations around the world even as they are being newly questioned at home.

The protections, which stem from a 1990s law, have already been tucked into the administration’s two biggest trade deals — the United States-Mexico-Canada Agreement and a pact with Japan that President Trump signed on Monday. American negotiators have proposed including the language in other prospective deals, including with the European Union, Britain and members of the World Trade Organization.

The administration’s push is the latest salvo in a global fight over who sets the rules for the internet. While the rules for trading goods have largely been written — often by the United States — the world has far fewer standards for digital products. Countries are rushing into this vacuum, and in most cases writing regulations that are far more restrictive than the tech industry would prefer.

Europe has enacted tough policies to curb the behaviour of companies like Facebook and Google and passed laws to deal with privacy, hate speech and disinformation. China has largely cordoned itself off from the rest of the internet, allowing Beijing to censor political content and bolster Chinese tech companies like Alibaba and Tencent. In India, Indonesia, Russia and Vietnam, governments are introducing regulations to ostensibly protect their citizens’ privacy and build domestic internet industries that critics say will stymie the ability of American companies to provide services in those countries.

The United States wants its more permissive rules to form the basis for worldwide regulation. But there is a rising debate about whether its regime of internet regulations has failed to protect consumer privacy, encouraged the spread of disinformation and supported a powerful forum for harassment and bullying.

US trade deals The American rules, codified in Section 230 of the Communications Decency Act, shield online platforms from many lawsuits related to user content and protect them from legal challenges stemming from how they moderate content. Those rules are largely credited with fueling Silicon Valley’s rapid growth. The language in the trade deals echoes those provisions but contains some differences.

That freedom has come under intense criticism from lawmakers and advocates. They say the 23-year-old law has allowed companies like Facebook and Google to avoid responsibility for harm associated with content that reaches billions of users. That anger has been compounded by revelations about the role of Silicon Valley’s business practices in the spread of disinformation and treatment of user data. The leaders of the House Energy and Commerce Committee said in August that it was “inappropriate for the United States to export language mirroring Section 230 while such serious policy discussions are ongoing.” The committee’s Democratic chairman, Representative Frank Pallone Jr of New Jersey, and its ranking Republican, Representative Greg Walden of Oregon, warned Mr Trump’s top trade adviser, Robert Lighthizer, that it would be a mistake to include the protections “in any trade deal going forward.”

On Monday, they called on Mr. Lighthizer to testify before the committee on the issue.

Enmity toward Section 230 is bipartisan. Conservatives have raised concerns in light of claims, largely made without evidence, that major online platforms like Facebook are biased against their positions. Senator Josh Hawley, a Republican from Missouri, has said the liability shield should cover large platforms only if they are certified as politically neutral.

The White House is also said to be drafting an executive order that would narrow the law’s protections.

Critics of Section 230 say they are alarmed by the inclusion of its provisions in trade deals.

“These trade agreements are only allocating more power to the companies at the expense of the individual,” said Carrie Goldberg, a New York lawyer who is challenging the gay dating app Grindr’s ability to use Section 230 to defend itself from a lawsuit.

Administration officials say Congress has tasked them with negotiating trade agreements that closely mirror American law. If those laws are a problem, it is up to Congress to change them, they say.

“This is U.S. law,” Mr. Lighthizer said in a congressional hearing in June. “I didn’t write 230. The Congress did — it was signed by the president, number one.

“Number two, we think it’s — that there are — there are nowhere near the problems that you see on issues of public morality and the like,” he added. “We put in specific language to make sure that that was not a problem.”

Trade agreements don’t completely prevent a country from passing legislation that contradicts their terms — including on legal liability — but they make doing so more complicated and risky. If a country violates a trade agreement, other members of the pact can bring trade disputes against them and may be able to impose tariffs or argue for leaving the pact.

The Trump administration describes the broader tech provisions in the agreements as a “gold standard” for the digital economy, and says it plans to use them in future negotiations, including with the European Union and Britain, if it leaves the bloc. The rules, which also provide for open access to government data and protections for company source codes and algorithms, are also part of the United States proposal for negotiations over e-commerce with dozens of countries at the World Trade Organization.

The tech industry has provided vocal support for the provisions as a way to discourage other countries from making platforms liable for their content. They argue that such legal exposure could clamp down on many kinds of normal business activity — including hosting user reviews and ratings — and could become a tool of governments hoping to crack down on free speech.

“Failing to include these protections — which have been a part of U.S. law for two decades — in trade agreements would negatively impact the countless small businesses and entrepreneurs that use online platforms to export and advertise their businesses,” said Michael Beckerman, the president of the Internet Association, which represents companies including Google, Amazon, Facebook, eBay and Twitter.

The idea has a powerful supporter in Senator Ron Wyden of Oregon, the top Democrat on the Finance Committee, which has jurisdiction over trade. Mr. Wyden also has a personal connection to the issue: He co-wrote Section 230 while serving in the House.

In an interview, Mr. Wyden rejected the idea that trade agreements were an end run around Congress.

“I know some people are trying to say, ‘Oh, my goodness, there’s this brand-new thing: Somebody’s talking about trade and 230,’” he said. “Get real.”

Mr. Wyden said strong digital trade agreements should support free speech and “include the principle that online businesses are able to moderate content generated by users without being treated as the speaker.”

Regardless, countries around the world have weighed whether to increase the responsibility that companies have for user content on their platforms — raising the prospect that American trade efforts to enshrine the Communications Decency Act’s protections may run aground.

“I don’t think there’s a chance that major economies like the E.U. are going to accept C.D.A. 230” said Daphne Keller, the director of intermediary liability at Stanford Law School’s Center for Internet and Society. “So I’m not sure what the net effect is.”