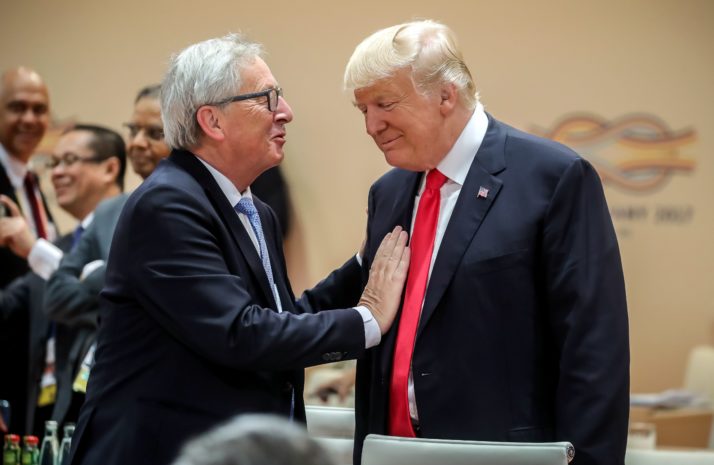 Washington is pressing the European Union to speed up trade negotiations launched after last month’s meeting between US President Donald Trump and EU Commission President Jean-Claude Juncker, two German and a US official said on Saturday (25 August).

Emily Haber, Germany’s ambassador to the United States, told reporters a working group formed after the Trump-Juncker meeting had convened for the first time this week, and US officials were pressing “for very rapid results”.

She said EU officials would need a clear mandate to move beyond the current “scoping exercise” and a deal would need to be reached before European Parliament elections in May 2019.

“The Americans are in fact pressing for very rapid results,” Haber said at an event to unveil plans for more than 1,000 events in the United States next year aimed at strengthening bilateral ties.

“As far as the timelines go, I would point out that we have European Parliament elections next year, and an agreement would have to be reached in a timely manner before these elections,” the German ambassador said.

A US official confirmed Washington was asking for talks to be put on “a much faster timeline” but gave no specific date.

Trump agreed during the meeting with Juncker to refrain from imposing threatened car tariffs on European firms while the two sides launched negotiations to cut tariffs on steel, aluminium and other goods.

The surprise agreement eased the threat of a transatlantic trade war, but US officials have grown frustrated about the slow pace of progress in subsequent weeks, with the first working group meeting postponed until after European holidays.

US Treasury Secretary Steven Mnuchin said last month he was hopeful the issue could be resolved “very quickly.”

A European Commission spokesman confirmed a meeting of the EU-US working group took place this week but gave no details.

Stefan Mair, a member of the executive board of the German industry group BDI, said some progress was reported at the first meeting of the new working group, including on the expected timetable, but did not elaborate.

“We know the Trump administration is strongly pressing for short timelines and quicker progress,” Mair said at the event showcasing ties between Germany and the United States.

“But we insist that this should not happen at the expense of a thorough result because we are interested in seeing an agreement that goes beyond tariffs and looks at more general issues affecting business relationships,” he added.