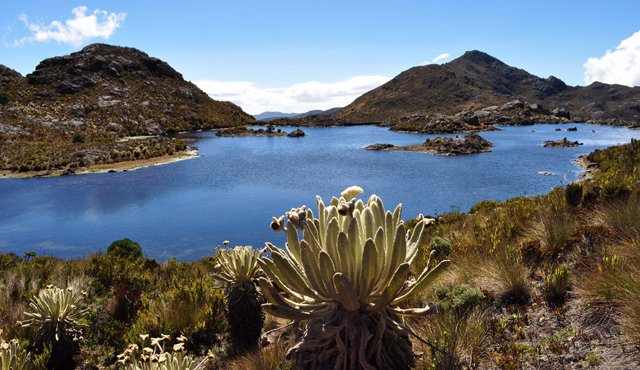 The mine would have been situated in the Santurbán Páramo, a high-altitude wetland ecosystem that serves as a vital source of drinking water for approximately two million people in the city of Bucaramanga and surrounding areas.

It’s helpful to review a timeline of the controversial project.

The history of it goes back to 1994 when Eco Oro (then called Greystar Resources) began their exploration in the area.

CIEL has also noted, "These permits allow for exploration but not extraction unless environmental permits are granted."

It highlights, "Colombian law prohibits mining within páramo limits [but] many companies have attempted to exploit this ambiguous language to carry out harmful mining projects."

Mongabay reports, "[Eco Oro’s] Environmental Impact Assessment was denied by the Colombian government in 2009 and again in 2011. Eco Oro changed its approach from an open-pit mine to a proposed underground mine."

CIEL adds, "Since 2010, the Committee for the Defense of Water and the Santurbán Páramo, a diverse civic coalition composed of 40 groups, has opposed the mining project."

The Luis Carlos Perez Lawyers’ Collective (CCALCP), which receives protective accompaniment from Peace Brigades International-Colombia Project, is one of those groups that has worked with this committee in defence of the moor.

In 2012, the Committee for the Defense of Water and the Santurbán Páramo made a complaint about the project to the compliance advisor ombudsman, a recourse mechanism for projects financed by the International Finance Corporation, the private lending arm of the World Bank.

That complaint was made in partnership with CIEL, MiningWatch Canada and the Interamerican Association for Environmental Defense (AIDA).

In January 2013, in a clear setback for the mine, Colombia’s Ministry of Environment declared the Santurbán páramo a Regional Natural Park.

Then in February 2016, Colombia’s constitutional court ruled that mining in the páramos was illegal.

The Bogota Post reports, "Previously, companies had been operating under a loophole that exempted mining licenses issued before February 2010. The court deemed these exceptions ’unconstitutional’ and cited the ecological importance of the páramos, including their role in providing 85 per cent of the country’s drinking water."

The constitutional court also ruled, with respect to a challenge filed by the Committee and the Lawyers Collective, that the Ministry of Environment violated the community’s right to participation and due process.

At that time, El Espectador reported (in Spanish), "Despite the fact that the Committee had requested in November 2013 that a public hearing be held, prior to the demarcation of Santurbán, it was never held and, instead, the Ministry of the Environment limited itself to listening to some actors, such as mining companies, but not to the community in general."

In March 2016, Eco Oro announced that it could not reach a settlement with the Colombian government and that it would take the dispute to international arbitration.

Mongabay reports, "The company argued that Colombia violated its obligations under the Canada-Colombia Free Trade Agreement when the state implemented measures to protect the Sánturban Páramo, limiting the company’s future prospects."

In August 2016, the Colombian National Mining Agency issued a decision against Eco Oro given the February 2016 constitutional court decision. By December 2016, the International Finance Corporation divested from Eco Oro.

In March 2018, Eco Oro filed a memorial on the merits of this case with the World Bank’s International Centre for Settlement of Investment Disputes (ICSID).

While Eco Oro claims to have invested US$250 million in the project, it is seeking US$764 million as compensation for the cancellation of the project.

On February 27, 2019, the Center for International Environmental Law noted in a media release, "The World Bank’s International Center for Settlement of Investment Disputes has declined to accept an Amicus Curiae that was to be presented by the Committee for the Defense of Water and the Páramo de Santurbán and allied international organizations."

Those opposed to transnational corporations using investor-state provisions in "free trade" agreements to undermine the public’s ability to protect fresh water will want to monitor this case as it unfolds at the World Bank.

Brent Patterson is a political activist and writer.