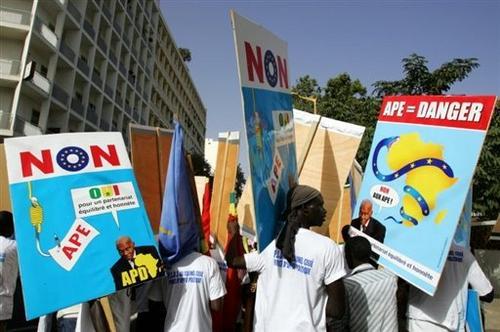 The European Union (EU) in collaboration with the West African countries has agreed to conclude a regional agreement on trade in goods and development cooperation by October 2009.

EU’s Trade Commissioner Catherine Ashton alongside the Commissioner for Development and Humanitarian Aid Louis Michel had met with Presidents of regional organizations including the Economic Community of West African States (ECOWAS) and the Union Economique et Monetaire quest-Africaine (UEMOA) and also West African Ministers in Brussels.

Both sides reaffirmed their commitment towards moving forward the long term process of building a lasting partnership between the EU and West Africa.

According to Commissioner Ashton, the decision has set them on the road to concluding a comprehensive trade partnership with all the West African regions. This, he went on, will support the ongoing economic integration process and development.

"I would like to pay tribute to the West Africa negotiators who have worked so hard with us to establish a regional consensus to this point. I am confident we can settle the remaining issues and move forward" Commissioner Michael said, adding, "Our latest meeting is a clear sign that we are back on track- making steady progress with our West African partners. Our goal must remain to reach an agreement on a full Economic Partnership Affairs (EPA) that brings development, support and benefits for all countries in the region. This will support regional integration, regional markets that attract investment and sustain jobs and regional governance that can address problems which individual countries can no longer solve on their own. This is much needed during difficult times, such as the present financial crisis".

He said the EPA Programme for Development (EPAPED) was identified as an essential pillar to boost competitiveness in the region, reduce adjustment costs of the EPA and support regional integration, citing that European and West African negotiators met last week in Cotonou (Benin) and also just before the Ministerial meeting in Brussels and compromises were found on export taxes, free circulation and on EPA-related development co-operations.