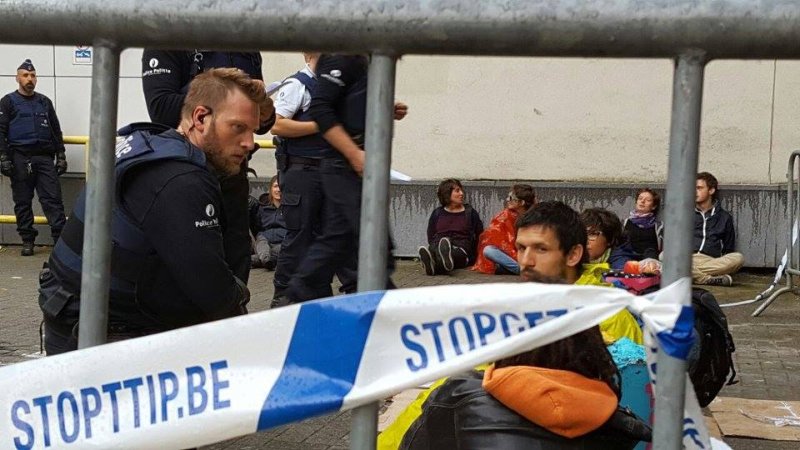 What does Brexit mean for TTIP?

Far from killing off TTIP, Brexit may provide the boost of political will needed to drag the trade deal over the finish line, and could unleash a wave of economic liberalism across Europe, write Gabriel Siles-Brügge and Ferdi De Ville.

Gabriel Siles-Brügge is lecturer in Politics at the University of Manchester. Ferdi De Ville is Associate Professor at Ghent University. They are the authors of TTIP: The truth about the Transatlantic Trade and Investment Partnership. This article was originally published by the German Development Institute (DIE/GDI).

With the dust slowly settling after British voters opted to leave the European Union last week, it is time to discuss the broader implications of this massive decision. There have been worried (or gleeful) claims from several quarters that Brexit represents the end of the Transatlantic Trade and Investment Partnership (TTIP), a controversial free trade agreement currently under negotiation between the EU and the US. But we are already seeing signs that these conclusions may have been drawn prematurely. While the agreement may be delayed past 2017/18 (something, it should be said, that was already on the cards before the referendum) TTIP is far from dead. Rather, Brexit may strengthen the resolve of those wishing to negotiate the agreement in the interest of European unity.

The first intervention in this respect has come from United States Trade Representative Mike Froman, who the day after the referendum emphasised that the “economic and strategic rationale for T-TIP remains strong”. Of course, much depends on the next US Administration, set to take over in January 2017. But while both Donald Trump and Hilary Clinton have been critical of the current trade agenda, politicians of all stripes have been known to backtrack from primary rhetoric. Barack Obama went on to pursue an ambitious free trade agreement agenda after being very critical of NAFTA during the 2008 primary season (as indeed was Senator Hillary Clinton).

Trade Commissioner Cecilia Malmström also used a recent speech to the Atlantic Council to emphasise that “the rationale of TTIP remains as strong today as it was [before the referendum]”. Reading the fine print of the speech certainly does not suggest a climb-down from key EU positions, such as on government procurement or investment protection. But Malmström also stressed a desire to complete the agreement quickly, as the EU was “prepared to make the political choices needed”.

Given that the EU’s leverage in the negotiations has been weakened after the Brexit referendum, this sort of statement could be read as a willingness to make concessions. Given the UK’s economic importance, the EU’s market for US products has potentially shrunk considerably, making the EU a less attractive trade partner. And the exclusion of the City of London may mean one bone of contention (US insistence on not discussing the regulation of financial services in TTIP) is removed, or at least likely to have its significance reduced (as there are indeed others wanting to take London’s place as the European centre for financial services).

If we examine the broader EU political landscape, the ‘Euro-realists’ may be winning out. While the term has been used before, it has more recently been associated with the European Conservatives and Reformists (ECR) Group in the European Parliament, whose vision is to reform the EU by further liberalising the Single Market. They especially want to fight the “hidden protectionism that is to be found in national labour laws or trade union practices” which “weakens Europe’s ability to compete on the global market”.

While it might seem that the Euro-realist project has been dealt a blow by Brexit, as the ECR would lose its UK Conservative MEPs (the largest delegation in the group) and the UK’s seat in the Council, its ideas seem to be winning the struggle about how to interpret and learn from the UK’s referendum. Notwithstanding calls to respond with closer integration, those in key positions seem to be advocating a ‘realist’ rather than ‘utopian’ reaction. The President of the European Council Donald Tusk criticised notions of having ‘more Europe’, saying that “promoting them only leads to the strengthening of Eurosceptic moods”.

The long-standing, powerful German finance minister Wolfgang Schäuble also called for Brussels to be curbed: “now is the time for pragmatism”.

The long-standing, powerful German finance minister Wolfgang Schäuble also called for Brussels to be curbed: “now is the time for pragmatism”.

Notwithstanding the hopes of ‘Lexiteers’ and some on the Left outside of the UK, a ‘Social Europe’ that promotes fair working conditions and social protection seems to have only become harder to achieve post-Brexit. If Euro-realism becomes the new common sense in Europe, the conclusion of TTIP might become more likely. TTIP would liberalise trade with the US and could indirectly lead to further deregulation of the Single Market, in line with the Euro-realist vision. As the ‘pragmatic’ left in Europe would be put further on the defensive, some here might be tempted to abandon their reservations regarding TTIP in order to show that the EU can still deliver. In the UK, Brexit has also been followed by calls to stay attractive to business by further deregulating working conditions and lowering corporate taxes, and pursuing more liberal trade agreements around the world.

Those who would like to see the EU and the UK deliver a fairer economy and society are likely to be alarmed by the ascendance of such ideas post-Brexit.