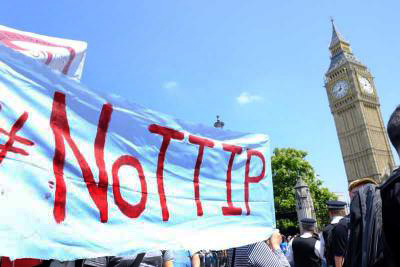 What the leaked EU-Canada trade paper means for TTIP

BRUSSELS — EU trade negotiators, who like to give as little away as possible, will have been deeply dismayed by the leak of 520 pages of their latest baby: the EU-Canada free trade agreement (Ceta).

The document, published by German broadcaster ARD last week, set out a large portion of the draft agreement reached after close to five years of painstaking talks.

For trade geeks or those with severe insomnia the good news is that there is more to come. The Canadian government has indicated that it expects the entire agreement to span around 1,500 pages in total, which will be made public following an EU-Canada summit in September.

Delivering a trade deal is a slow business.

European Commission President Jose Manuel Barroso and Canadian Prime Minister Stephen Harper formally signed off the end of the political side of negotiations last October. It has since been subject to 10 months of fine-tuning by trade officials and legal scrutiny ahead of the September summit.

It will then face two years going through the Canadian and European parliaments, as well as Canada’s 13 provincial assemblies, before deputies take the final votes on whether to put it into law.

But Ceta, which the commission claims will be worth over €25 billion per year, is more important to Brussels than the average free trade deal.

Its passage has become a test run ahead of the anticipated trans-Atlantic trade and investment deal between the EU and the US known as "TTIP". EU trade chief Karel de Gucht has publicly described it as a "template" for TTIP.

Unsurprisingly, most of the document’s contents are, at first glance, punishingly boring to the average reader.

There are, however, interesting quirks and exceptions to the principles of unfettered free trade. For example, it reveals that the Canadian provinces of Ontario and British Columbia will be allowed to have no more than 292 and 60 shops, respectively, that exclusively sell Canadian wines. No chablis or rioja for them.

Much of what is contained in Ceta is uncontroversial and large tracts of it will almost certainly re-appear, perhaps even word for word, in TTIP.

For starters, it will be more difficult to keep the contents of TTIP under wraps.

Last month, the European Ombudsman opened an investigation calling for the Council to publish the EU negotiating directives for the TTIP negotiations. She has also proposed to the European Commission a range of practical measures to enable timely public access to TTIP documents.

Meanwhile, financial services will not be included at all in TTIP (at the behest of the Americans) and the section on geographically-specific foods such as Parmesan and Feta cheese is likely to be different.

Last month, Washington DC’s EU ambassador, Anthony Gardner, told this website that the EU had “exaggerated the protection of some of its geographical-specific products".

“We were not happy with the GI [geographic indicators] proposal in Ceta ... but in our agreement it will not be dealt with in the same way,” he added.

Most important, however, are likely to be the sections of TTIP that deal with investor-state dispute settlement (ISDS) – the provisions which allow companies to sue governments if they believe themselves to have been treated unfairly, and have stoked such controversy in European debate.

Around 30 pages of Ceta focus on the rights of Canadian and EU investors in the other’s territories.

Again, most of the language appears innocuous legalese. Officials often argue that ISDS is fundamentally protection from discrimination. For example, the investment articles would forbid the EU and Canadian governments from limiting foreign shareholding, imposing quotas on employee numbers, forcing firms out by limiting the number of firms that can operate in a specific sector.

It then goes on to list the rights and legal process under which companies can appeal against a government that it feels has breached the principles of ‘fair and equal treatment’.

To most people, the answer would be Yes. Apply the same language to a trade deal with the US - and its reputation for cut-throat corporations rather than those wholesome Canadians - and the average Joe is likely to be less sanguine.

For example, Article X(9) paragraph four in the section on investment protection contains a phrase that will almost certainly be used by anti-TTIP campaigners.

"A Tribunal may take into account ... whether a Party (government) created a legitimate expectation ... upon which the investor relied in deciding to make or maintain an investment".

Phrases such as "legitimate expectation" are the kinds that have corporate lawyers immediately pricking up their ears.

Like the EU’s own treaties, there are numerous annexes in Ceta devoted to areas that are politically important to both sides.

Intriguingly, there is an annex to clarify how investor-state dispute should be handled in the financial services and intellectual property fields, but no protocol or statement on the general purpose or limits of ISDS.

The draft Ceta agreement also includes a provision that governments should be allowed to have their courts interpret intellectual property rights on the basis of domestic law, which some legal analysts have suggested is the result of an ongoing dispute between the Canadian government and US pharmaceutical giant Eli Lilly.

Eli Lilly is pursuing a $500 million law suit claiming that Canada is in breach of the North American Free Trade Agreement (Nafta) by allowing its courts to revoke two of its patents.

The controversy over ISDS is a relatively recent phenomenon and one that, in large part at least, is the result of fears about litigious US multinationals.

Without similar provisions to those in Ceta, plus cast-iron guarantees that investor protection rules will have no impact on whether governments can legislate in the environmental or public health fields, it is hard to see how ISDS will survive as part of TTIP.

Trade negotiators are often at pains to stress how technocratic, de-politicised and plain dull their work is. Much of Ceta’s contents bear this assessment out.

But that line will not prevent TTIP from being treated differently to previous trade deals. It is simply too big and too important and, already, too political.