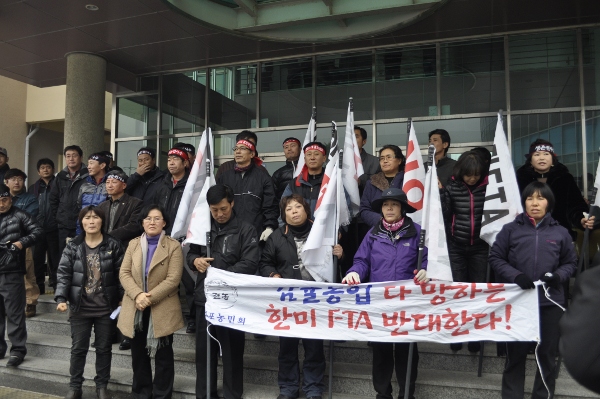 Protestors listen to a leader of the Jeju branch of the Korean Peasant League before a government-led workshop on the Korea-US FTA takes place in Jeju City, Jan. 9. Photo by Angela Kim

’Who is this workshop for?’

Seven protesting farmers and fishermen barred from a government meeting on the Korea-US FTA are arrested in Jeju City, Jan. 9

On Jan. 9, a Ministry of Food, Agriculture, Forestry and Fisheries workshop was held on Jeju at the Jeju Special Self-Governing Province Agricultural Research and Extension Services building, in Jeju City. This is one of nine meetings related to the Korea-US Free Trade Agreement (FTA) being held by the government around the country from Jan. 4 to Jan. 13.

The goal of the nine province-workshop tour is to explain the government’s agricultural policies and explain supplementary measures of the Korea-US FTA to civil servants and National Agricultural Cooperative Federation (Nonghyup) workers who work closely with the farmers. 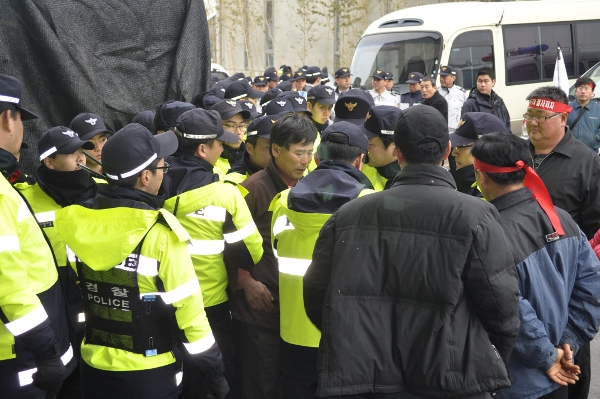 A farmer protesting the Korea-US FTA agreement is surrounded by police before the goverment workshop started at 2 p.m., Jan. 9, in Jeju City. He was subsequently arrested and removed from the site. Photo by Angela Kim

Over 30 farmers from the Korean Women Peasant Association and the Korean Peasant League protested in front of the building from 1 p.m. with picket signs that read “The Korea-US FTA is poison” and “We are against the Korea-US FTA which harms orange farms.”

Over 300 policemen in riot gear and bright yellow police coats were deployed to the area around the government building. Many of the protesting farmers expressed frustration at being blocked from entering part of the public building dedicated to the use of Jeju farmers and fishermen.

During the protest, a leader from The Korean Peasants League Jeju Branch wearing a red headband reading “Down with the FTA” said, “If the FTA is implemented, over 1 trillion won [US$860 million] worth of damage will be done to Jeju. How can this kind of workshop prevent that much damage?” 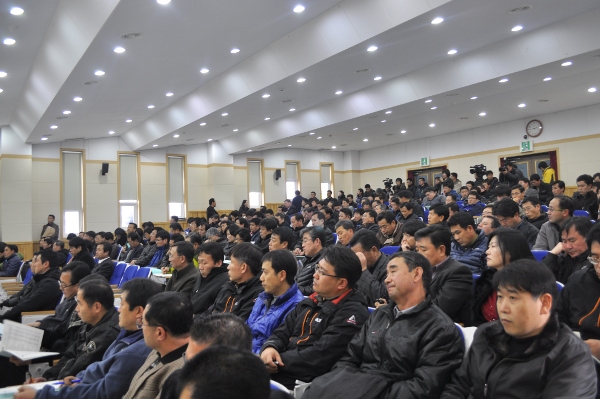 Seven of the protesters, including Korean Peasants League Jeju President Kim Jang Taek, were arrested for obstruction of justice before the workshop began at 2:10 p.m.

While the workshop was in progress, farmers could be heard shouting outside, “Who is this workshop for?”

Oh Jung Gyu, the second vice minister of the Ministry of Food, Agriculture, Forestry and Fisheries, told the crowded lecture hall that the FTA is “needed” and “unavoidable.” 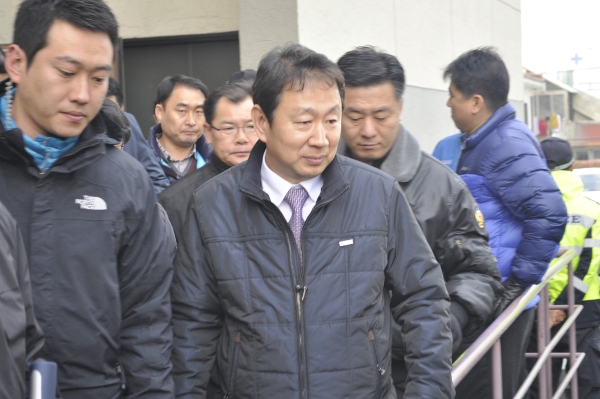 “There are 137 FTAs in the world. The world is in FTA competition mode,” he said. “Our ambition is too big for us to stay inside and build a wall against other countries.”

Oh emphasized not only the economic benefits of the agreement, but also its importance for national security.

Then a Q&A session followed. Attendees asked questions to the vice minister and four other officials about the government’s policies specifically on Jeju.