As the next round of the EU-US trade negotiations approaches, the extreme lack of transparency surrounding the talks is coming under increasing scrutiny. New information released by Friends of the Earth Europe shows a largely industry-dominated discussion, behind closed doors, in what is being touted as the biggest bilateral trade agreement in history.

The talks resume on July 14th in Brussels. The European Commission is boasting of unprecedented levels of transparency for a trade negotiation, and maintains that they have an "open-door" policy with external stakeholders on the topic. Yet, civil society is being kept in the dark and has had to rely on government and industry leaks to get a clearer picture of the discussions between the US and the EU.

Meanwhile, big business and Industry lobby groups have continued to gain privileged access to decision-makers in the European Commission throughout the talks – with new evidence proving this trend has yet to change.

In response to multiple access-to-document requests from Friends of the Earth Europe, several of the European Commission departments involved in the EU-US trade talks – including DG Trade, DG Agriculture, DG Enterprise, DG Environment, DG Connect – released lists of meetings held with external stakeholders on the topic between July 1st, 2013 and the February 19th, 2014.

The responses reveal an overwhelming influence of industry lobby groups on the trade negotiations, reflecting the intimate working relationships between key decision-makers in the European Commission trade negotiators and powerful lobby groups.

The meeting lists received reveal that DG Trade, where EU negotiators sit, held a staggering 113 meetings (74%) with industry lobby groups out of 154 meetings held in total with external stakeholders with only 13% (19 meetings) held with public interest groups. 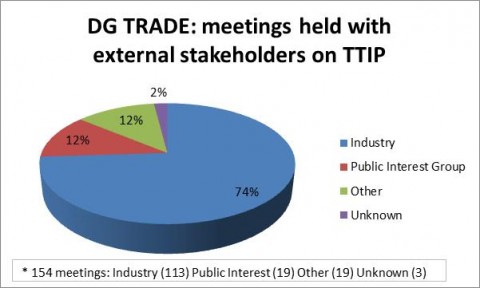 Some of the powerful industry players who seek to use the trade negotiations to boost commercial interests appear numerous times in the list. These include key proponents of the trade deal such as the Transatlantic Business Council and BusinessEurope or the chemical industry’s lobby umbrella CEFIC – all of which are keen advocates of proposals for permanent regulatory cooperation that civil society groups fear will be used to further strengthen industry dominance on policy-making on both sides of the Atlantic, and weaken essential health, environment and consumer protections.

Meetings held by other DGs reveal a significant domination of industry lobby players in their interactions with third parties in relation to the EU-US trade deal.

Meetings held by DG Agri during that period involved industry players in 82% of the cases, including powerful agribusiness groups such as Cargill or the American Soybean Association, a representative of whom urged US senators "to ensure that key EU biotech policies that discriminate against U.S. exports are addressed within TTIP". This came in response to statements by senior EU officials that TTIP was not going to compromise any EU regulation in relation to the authorisation and labeling of genetically modified crops. 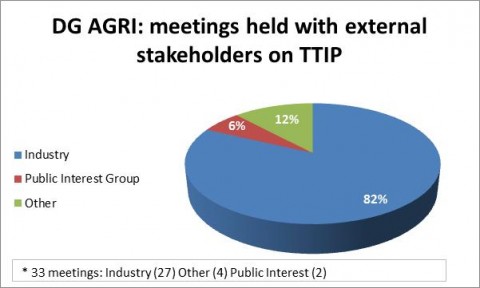 With DG Enterprise, 85% of the meetings with stakeholders were held with industry – also revealing an overwhelming domination of the car industry, through meetings with representatives of the European Automobile Manufacturer’s Association (ACEA), the umbrella lobby group for this sector at the European level. 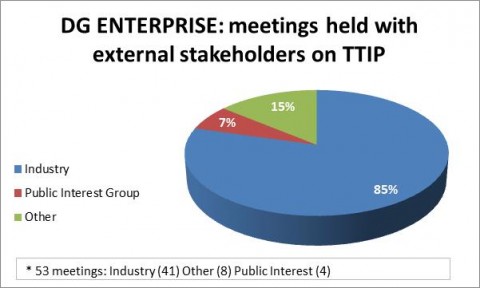 An EU-US trade deal will only be acceptable if it builds a better future for people and the environment, according to Friends of the Earth Europe. The current direction of the talks appears to promote the exact opposite, and leaves many questions raised by civil society – concerning the threat to safeguards for the environment and citizens – unanswered.

Friends of the Earth Europe will continue to call for the publication of the negotiating mandate, all documents submitted by the European Union during the negotiations, and the negotiating texts themselves. Citizens have the right to know what is being put on the table, and how this is being negotiated.