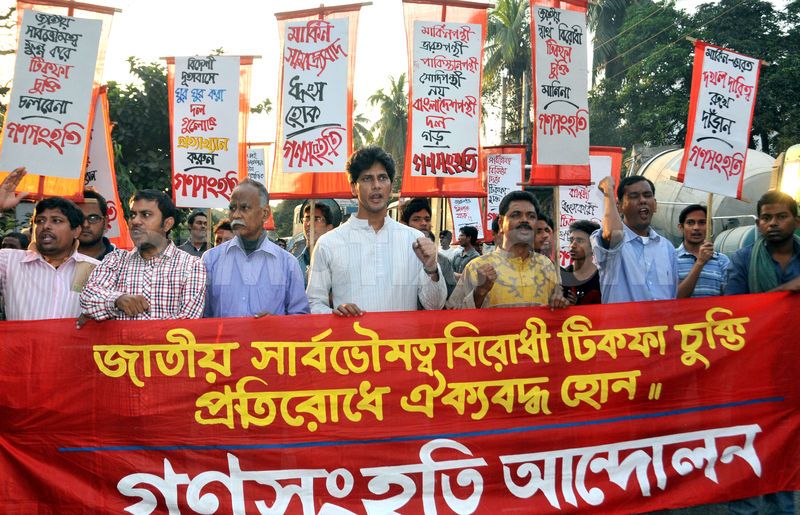 A writ petition was filed with the High Court (HC) Wednesday challenging legality of the Trade and Investment Cooperation Framework Agreement (TICFA), signed recently between Bangladesh and the USA.

In the petition, a rule was sought from the HC as to why the signing of the much-talked-about treaty on November 25, 2013 in Washington would not be declared illegal, sources in the Supreme Court (SC) said.

During pending of the rule, the petitioners also sought the HC’s injunction order to restrain the respondents concerned from taking any further steps to implement the treaty.

Three lawyers and a law student filed the writ petition with the HC, their counsel Barrister Moksadul Islam told the FE.

He expressed hope that hearing on the matter is likely to be held when the HC sits after the ongoing blockade.

The cabinet secretary, the prime minister’ office (PMO) secretary, the law secretary, the commerce secretary, foreign secretary and acting Deputy United States Trade Representative (USTR) represented by the US Ambassador in Dhaka were made respondents in the petition.

Mr Islam mentioned a number of legal and economic grounds in favour of their stance against the treaty. The impugned treaty was signed in violation of the Constitution’s Article 145A that made discussion of all treaties, with foreign countries, in parliament mandatory.

Here, there is no scope of bypassing the parliament under any circumstance even when the national security is at risk, the lawyer said.

If the TICFA comes into effect, prices of imported products, especially medicines and IT software, will go up several folds. In that case, the deal is against the greater interest of the people and the country. That’s why the writ petition was filed challenging legality of this treaty, he said.

He further submitted that the treaty is vague relating to labour rights, environmental protection and, most importantly, intellectual property rights. "Moreover, we failed to achieve economic solvency to implement any of the fundamental principles of state policy mentioned in Chapter II of our Constitution."

In other words, implementation of the treaty would create far-reaching complication in the labour market, especially in the readymade garment (RMG) sector. So, the treaty was signed illegally and without the mandate of the country’s people.

Mentioning some likely ’negative impacts’ of the treaty on our economy and the country’s people at large, he said that the government signed it unwillingly and due to undue pressure from the USA. The petitioners said that the TICFA proposal for Trade and Investment Framework Agreement (TIFA) was first proposed by the USA about a decade ago. It discontinued in 2008 when the USA came with a new name, TICFA.

However, the successive governments didn’t feel comfortable and shied away from signing any such agreement in view of some clauses relating to labour and environmental standards, intellectual property rights (IPR) obligations and governance issues (corruption), he said.

At one stage, the USA removed the issues relating to environmental standards and corruptions from the subsequent drafts because of discomfort of the Bangladesh government, the lawyers continued.

Unfortunately, the recent draft was never made public before it was signed on November 25, 2013 in clear violation of Article 145A of the Constitution.

There is a conspiracy theory in the air that the GSP (Generalised System of Preferences) facilities issue was introduced only with the aim to put pressure on the government on signing TICFA or face withdrawal of GSP facilities at one stage on flimsy grounds, and it happened recently, as per the writ petition.