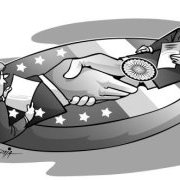 Problems in trade talks with EU
18-Feb-2011 Hindu Business Line
EU is pushing India to relax controls on capital flows and conditions on investment, such as export obligation and local content requirement. 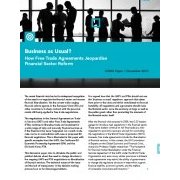 Business as usual - How free trade agreements jeopardise financial sector reform
31-Jan-2011 SOMO
In contrast with the current wide-ranging financial reform agenda in the European Union, the EU continues to liberalise a wide range of risky and non-risky financial services in the General Agreement on Trade in Services and other Free Trade Agreements as if the financial crisis never happened. This SOMO briefing paper gives specific examples on how new EU regulations are in contrast with the pre-crisis model that is still being applied in the GATS negotiations, the Cariforum-EU Economic Partnership Agreement and the EU-South Korea FTA. 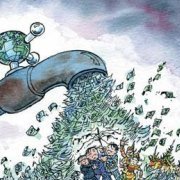 US: More than 250 economists call for trade reforms to allow capital controls
31-Jan-2011 IPS
In a letter delivered January 31, more than 250 economists urged the Obama administration to reform US trade rules that restrict the use of capital controls.
GCC close to meeting monetary union plan
17-Jun-2010
At the end of 2009, all GCC countries, with the exception of UAE and Oman which disengaged from the plan, were within the fiscal convergence criteria needed for the regional monetary union, the Washington-based Institute of International Finance (IIF) said.
Malaysia can become a gateway for Emirati investors, Deputy Governor Bank Negara Malaysia
26-Apr-2010
Dato’ Mohd Razif Deputy Governor of Bank Negara Malaysia (BNM) said that Malaysia has ample investment opportunities in various fields and can become a gateway for Emirati investors to access Asian Markets, expressing his resolve to open joint ventures between Malaysia and United Arab Emirates to enhance economic and trade ties between them.
Malaysia To Include Islamic Banking In FTA Talks With GCC
26-Apr-2010
Malaysia, which is currently in the midst of negotiating a free trade agreement (FTA) with the Gulf Cooperation Council (GCC), will look at several sectors including Islamic banking to be included in the FTA.
The changing landscape of export credit agencies in the context of the global financial crisis
14-Apr-2010
New study by Kavaljit Singh on the structure and role of export credit agencies, an integral part of trade finance and investment relations
Rural banks decry ASEAN free trade pact
18-Feb-2010 BusinessWorld
The Rural Bankers Association of the Philippines says its sector will suffer greatly as tariffs on farm goods fall in line with the implementation of the ASEAN FTA.
Taiwan won’t let China acquire local financial firms
10-Dec-2009 Bloomberg
Taiwan won’t allow Chinese banks to acquire local financial institutions when it signs an economic cooperation agreement with the mainland, Premier Wu Den-yih said.
Review of trade policies of India’s major trading partners
13-Sep-2009 Centre for WTO Studies
A review of market access barriers faced by Indian exporters in its major trading partners and other select countries, 24 in all.
Opposition lawmakers may stall Canada-Panama free trade accord
15-Aug-2009 Bloomberg
The free trade agreement between Canada and Panama signed Aug. 11 may be stalled or even defeated in Canada’s Parliament unless Prime Minister Stephen Harper can convince at least one opposition party to overcome concerns about Panama’s tax policies.
Panama wrong choice for Obama’s first trade deal
27-May-2009 Seattle Times
This trade deal — largely based on the North American Free Trade Agreement model — was written by and for multinational companies. It enables companies to increase their profits while skipping town on taxes.
China to offer more concessions to Hong Kong companies
11-May-2009 WSJ
Under new supplements to their Closer Economic Partnership Agreement, China will further open banking and securities services to Hong Kong companies
Panama’s president-elect to push US trade deal
5-May-2009 Reuters
Finalizing a free-trade deal with the United States is a major goal for Panamanian President-elect Ricardo Martinelli, but the supermarket tycoon rejects US accusations that the country is a tax haven.
New report: Panama FTA would undermine US efforts to stop offshore tax-haven abuse and regulate risky financial conduct
2-May-2009 Public Citizen
The trade deal would leave tax shelters for AIG and narcotraffickers intact while removing existing US tools to combat tax evasion and other financial crimes
Reciprocal terms missing in the proposed India-EU pact
9-Apr-2009 Economic Times
Unlike other bilateral agreements, the potential implications of India-EU FTA would be far-reaching since nine EU-based banks together controlled 65% of total assets of foreign banks in India in 2008. By asset size, out of the top 10 foreign banks in India, six are European.
Panama-AIG outrage on all fronts
28-Mar-2009 Eyes on Trade
Anger is brimming over in diverse corridors over the Bush hangover agreement with Panama, and the new rights it would give to AIG-linked bodies in Panama to sue US taxpayers.
AIG suing taxpayers for its own Panama tax dodging
21-Mar-2009 Eyes on trade
Under the Panama FTA, AIG-Panama would be able to sue the US taxpayer for cash damages by claiming common regulatory actions were "tantamount" to an ("indirect") "expropriation."
Taking the credit - how financial services liberalisation fails the poor
16-Mar-2009 WDM
The report looks at how financial services liberalisation, and especially the entry and ongoing presence of foreign banks in the global south, as promoted at the World Trade Organisation and through European bilateral trade deals, leads to the prioritisation of richer customers and larger companies resulting in poorer customers losing out.
TWN preliminary report on FTA/WTO and financial crisis
16-Mar-2009
A new TWN report finds that North-South free trade agreements, bilateral investment treaties and World Trade Organization commitments often contain a number of provisions that can increase the likelihood of a financial crisis and make it more difficult to take the necessary measures to deal with one once it occurs.
0 | ... | 120 | 140 | 160 | 180 | 200 | 220 | 240 | 260 | 280 | ... | 300
Subscribe to bilaterals.org weekly