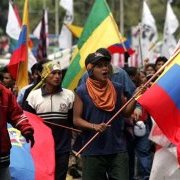 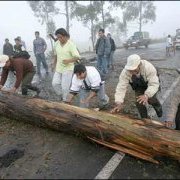 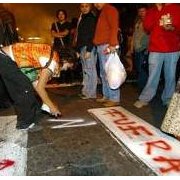 Ecuadorean Indigenous vs. FTA
18-Nov-2005 Prensa Latina
Members of the Confederation of Indigenous Nationalities of Ecuador (CONAIE, in Spanish) are once more staging protests this Thursday to reject the signature of the Free Trade Agreement (FTA) with United States.
No pax americana
8-Nov-2005 Khaleej Times
Indigenous movements are indeed a threat to the free-trade policies Bush is hawking, with ever fewer buyers, across Latin America. Their power comes not from terror but a terror-resistant strain of hope, so sturdy it can take root in the midst of Colombia’s seemingly hopeless civil war.
Indigenous groups against the FTA
23-Mar-2005
On March 6, six indigenous communities in the Cauca valley in southwest Colombia voted in a referendum to reject the signing of a Free Trade Agreement (FTA) with the United States.
Call for a citizen’s popular consultation Concerning the Free Trade Agreement
23-Feb-2005 En Camino
The experience of the countries that have been put under the neoliberal policies and the FTA, the results of the economic opening imposed by the Government of President Gaviria, the process of negotiation between Colombia, Ecuador, Peru and the USA, puts in evidence that the right to democratic and popular consultation and resistance is justified.
Critique of the proposed Chile-New Zealand Closer Economic Partnership (P3 with Singapore)
21-Dec-2004 ARENA
The New Zealand, Chile and Singapore governments are promoting a P-3 whose primary - and arguably only - beneficiaries are the transnational companies that straddle two of the three countries, including opportunists who locate there to take advantage of the deal. The greatest potential beneficiaries are the agribusiness interests of Fonterra and Nestle as they promote their shared strategy to dominate Latin America’s dairy industry.
Arena launches sign-on letter to oppose the P-3
21-Dec-2004 Scoop
ARENA today stepped up its campaign against the proposed Chile/New Zealand free trade agreement, which forms part of the Pacific 3 (P-3) with Singapore, by launching a sign-on letter to the Prime Minister calling on her to end the negotiations.
Central America is Not for Sale
5-Nov-2004
A call for organizational sign-ons from the Central America is Not For Sale Coalition
US-Andean talks even worse than feared
3-Nov-2004 Colombia Week
Barring major turns, any deal emerging from the talks will be a disaster for most Colombians. 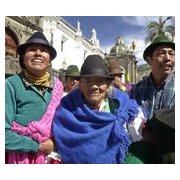 Demonstrations against Andean FTA continue
26-Oct-2004 Radiomundoreal
The Ecuadorian indigenous movement ECUARUNARI has called for a “great march” on Wednesday 27 October 2004 to protest against the negotiations carried out by Ecuador, Colombia and Peru with United States in order to sign a free Trade Agreement (FTA)
0 | 20 | 40 | 60 | 80 | 100 | 120 | 140 | 160
Subscribe to bilaterals.org weekly