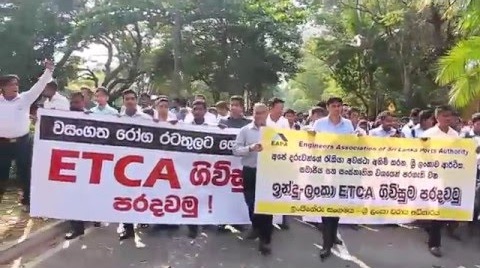 Shrouded in secrecy
29-Aug-2010 Sunday Leader
Director General Commerce Department Gomi Senadhira let the cat out of the bag when he told a seminar on the proposed Comprehensive Economic Partnership Agreement (CEPA) last Friday, that it was an agreement which was originally due to have had been signed in 2008 when Indian Premier Manmohan Singh visited the island for the SAARC summit, based on contents already agreed upon.
Commerce Dept: No intention to hide facts in CEPA
16-Aug-2010
The Government has no intention to hide the facts in the proposed Comprehensive Economic Partnership Agreement (CEPA) between India and Sri Lanka and all the details will be made public before agreement is signed, a senior official said.
Lanka to expand trade with Bangladesh
15-Aug-2010
Trade between Sri Lanka and Bangladesh will grow due to the vast opportunities in both countries to expand business, said High Commissioner of Bangladesh, Mahbub Uz Zamman.
Sri Lanka told time running out for new trade deal with India
23-Jul-2010 LBO
Sri Lanka could lose more opportunities to access India’s huge market owing to delays in striking a new economic partnership deal with her neighbour, the Indian envoy in Colombo has warned.
Indo – Lanka FTA not up to expectations since a decade
3-Jul-2010
Ten years after the implementation of the Free Trade Agreement (FTA) between India and Sri Lanka which came into full existence in March 1, 2000, most heads of Sri Lankan chambers of commerce and industries say that its performance is not up to expectation even after a decade.
Sri Lanka rejects EU’s rights conditions for trade benefits, saying they violate sovereignty
26-Jun-2010 Canadian Press
Sri Lanka’s trade benefits with the world’s biggest consumer market are due to expire Aug. 15. The EU had asked Sri Lanka to give a written commitment by July 1 pledging to improve human rights before it would consider renewing them.
DNA wants a CEPA debate
31-May-2010 Daily Mirror
The Democratic National Alliance in Sri Lanka has decided to ask for a parliamentary debate on the proposed Comprehensive Economic Partnership Agreement to be signed with India and asked the government to disclose the contents of the agreement. 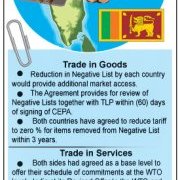 CEPA signing likely to delay
31-May-2010 The Nation
Although Governments of India and Sri Lanka have shown keen interest in expediting their mutual trade pact, the Comprehensive Economic Partnership Agreement (CEPA) is likely to get delayed after local business leaders have expressed grave concerns over its impact on Sri Lankan economy.
Catastrophic Economic Partisan Agreement (CEPA) with India means disaster
28-May-2010 Lanka Web
The India-Sri Lanka agreement is like the story of two farmers who share a cow by owning two equal halves of the cow. They tied a rope around the belly of the cow. One owned the front part and the other the rear. Farmer who owned the rear got all the economic benefits including milk, calves and even manure while the other paid for it! 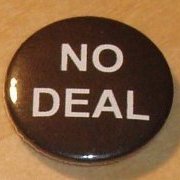