Toyota plans to tap regional FTAs
21-Feb-2006 The Star
Toyota Motor Corp Japan is re-strategising its position in Malaysia to take advantage of free trade agreements (FTAs) signed between the countries in the region.
Malaysia: FTAs with Pakistan, Australia & NZ to be completed this year
14-Feb-2006 Bernama
Free Trade Agreement (FTA) initiatives with Pakistan, Australia and New Zealand are expected to be completed this year, Malaysia’s International Trade and Industry Minister Datuk Seri Rafidah Aziz said Tuesday. She also said that FTA negotiations with the US and India would also begin this year, followed by the launch of a joint feasibility study for a possible FTA between Malaysia and Chile.
Scoping studies to pave way for Free Trade Agreement
22-Jan-2006
MALAYSIA and Chile are moving towards an eventual Free Trade Agreement (FTA), with both sides to undertake scoping studies. A Joint Study Group has been formed to complete the task and submit recommendations to both governments by the end of the year.
Joint-study group set up to study Msia-Chile FTA
19-Jan-2006 BERNAMA
Malaysia and Chile have taken the first step towards forging a free trade agreement (FTA) by setting up a joint study group to undertake a feasibility study on the matter.
Malaysia, Pakistan to conclude FTA talks by mid-2006
2-Jan-2006 Business Times
Malaysia and Pakistan are expecting to conclude negotiations on a bilateral free trade agreement by mid-2006, the Ministry of International Trade and Industry Ministry said.
Accord on early harvest programme with Malaysia next week
12-Dec-2005
Pakistan and Malaysia are signing agreement on Early Harvest Programme (EHP) next week, reducing tariff on 239 industrial and agricultural products, to be effective from next calendar year.
FTA to enhance Japan-M’sia economic relations, says Koizumi
10-Dec-2005
The Japan-Malaysia Free Trade Agreement (FTA) will boost trade and investment, improve competitiveness and advance Tokyo-Kuala Lumpur economic relations to a new stage, says Japanese Prime Minister Junichiro Koizumi. 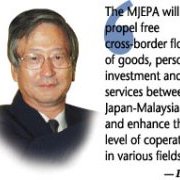 New chapter in strategic ties
10-Dec-2005 Business Times
Excerpts of New Straits Times interview with Japan’s Ambassador to Malaysia, Tadashi Imai.
Japan, Malaysia to sign FTA next week in Kuala Lumpur
9-Dec-2005 Antara News
apan and Malaysia are scheduled to sign a bilateral free trade agreement (FTA) during their summit talks in Kuala Lumpur next week on the sidelines of the inaugural East Asian Summit, Japanese officials said Friday.
Third round of NZ-M’sia FTA talks on Sept 14
7-Sep-2005
THE proposed New Zealand-Malaysia Free Trade Agreement (FTA) is on track, with the third round of talks to be hosted in Kuala Lumpur on Sept 14.
0 | ... | 90 | 100 | 110 | 120 | 130 | 140 | 150 | 160 | 170 | 180