More than 65,000 people rallied at Mexico’s Monument to the Revolution and marched to the historic Zocalo Square to demand a new economy that puts equality, justice and human rights first.

Farmers, union, environmental and women’s activists gathered in Mexico City last week to take stock of the lessons from NAFTA and plan strategies to confront the next big threat: the Trans Pacific Partnership (TPP). One of the earliest lessons from the NAFTA experience was that people and environments in all three countries were affected. The stories from Mexico, Canada and the U.S. were remarkably similar: environmental destruction, threats to union and community organizing, and, in all sectors, a marked increase in corporate concentration as companies gained new abilities to move different aspects of production across borders in search of lower costs and higher profits.

This has been especially true in agriculture. As part of the multisectoral forum, more than 100 members of ANEC, (the National Association of Rural Commercialization Enterprises, which brings together more than 60,000 Mexican small- and medium-scale farmers), organized a farmers’ forum with international allies. Alberto Arroyo, a longtime leader in the Mexican Action Network on Free Trade (RMALC), explained that Mexico’s dependency on food imports has increased dramatically since the agreement began, from 16 percent before NAFTA, to more than 42 percent today. That situation is even more alarming when we consider that today nearly half of Mexican families, even with two wage earners, can’t afford the “canasta basica” of basic necessities. Adding on to the devastation wreaked on the countryside by the influx of cheap corn under NAFTA, TPP would compel Mexican coffee farmers to compete with cheap Vietnamese robusta coffee. 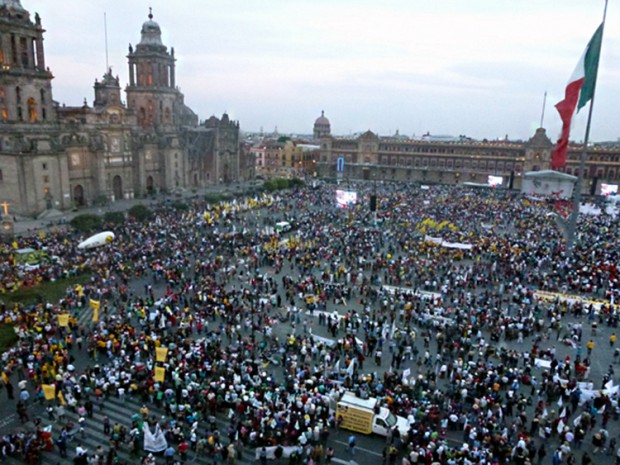 Doug Peterson from the U.S. National Farmers’ Union echoed those concerns. None of us is against trade, he said, but how that happens, and what the rules are, really do matter. He highlighted intellectual property rights proposals in TPP that would grant enormous new rights over seeds and other inputs to already powerful transnational corporations. NFU is concerned that those rights would be extended to patents on animal husbandry, expanding Monsanto’s dominance over seeds to breeding rights. In general, he said, what we really need are stable public policies to balance innovations in agriculture with food justice.

Victor Suarez, the leader of ANEC, emphasized the importance of rebuilding ties among farmers and consumers, unions and environmentalists. The TPP negotiations are forcing Mexicans to fight some of the same battles that came up during the NAFTA debate. The privatization of the Mexican ejido system of communal land owning, which the government liberalized as a pre-condition for NAFTA, is once again on the table. The 1991 reforms allowed existing ejidos to remain under community control, but new agricultural reforms announced in January would put those farms on a “fast track” for privatization, expelling thousands of small-scale farmers from their lands. Investment rules in NAFTA support changes in laws on land and mineral rights, often carried out in the dead of night, that devastate communities’ rights to natural resources. Plans to carry out a “second green revolution” in Mexico will increase pressure to use GMO seeds, as well as chemical fertilizers that will poison the soil and water so that they will not support sustainable agriculture, Suarez told participants. People in all three countries, he said, need to work together to recover sovereignty over our food, seeds and land.

Those efforts are already underway, starting with a massive march against neoliberal reforms in Mexico that pushed back on reforms to labor, energy and education policies. We added our voices against the expansion of the NAFTA model in TPP to more than 65,000 people who rallied at Mexico’s Monument to the Revolution and marched to the historic Zocalo Square to demand a new economy that puts equality, justice and human rights first. We were joined by activists in more than 50 cities across the United States and Canada in an international day of action against TPP and Corporate Globalization. The next joint actions will take place on February 19, when Presidents Obama and Peña Nieto and Prime Minister Harper meet in Toluca, Mexico.

The fight against fast track is the urgent issue right now in the United States. But our experience with other trade debates (such as the failed negotiations for the Free Trade Area of the Americas), demonstrates the crucial importance of coordinated action among civil society groups in the countries involved. Together, this chorus of voices has real potential to stop trade talks based on expanding the NAFTA model and create new economic ties based on human rights and food sovereignty.

The final declaration from the NAFTA plus 20 conference is available in English, Spanish and French.

Visit Citizens Trade Campaign’s Action Center to learn more, Flush The TPP or Stop Fast Track and to get involved with the campaign on fast track and TPP.