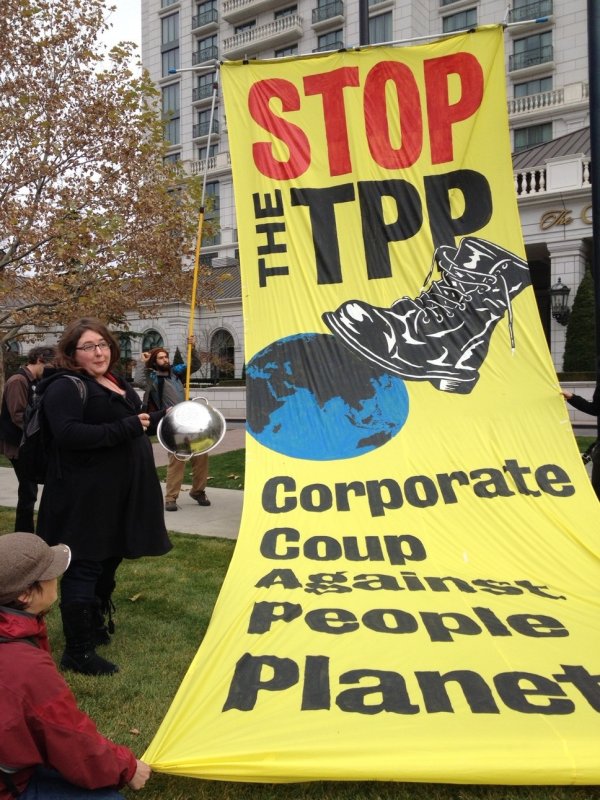 (Keith Johnson | The Salt Lake Tribune) Protesters rally outside the Grand America Hotel in Salt Lake City where lead negotiators for the Trans-Pacific Partnership are working toward a new free-trade agreement on Wednesday, Nov. 20, 2013,

Trade-talk protesters push limit, then back off

Protesters trying to disrupt free-trade talks Wednesday pushed their pan-banging, off-key trumpet blasts and huge banner up to the entrance of a Salt Lake City hotel, where representatives of 12 nations are meeting, then backed off when police prepared to arrest them. Some of the 20 demonstrators, who were among those who began the protests Tuesday, had tried earlier to get in through back doors of the Grand America Hotel but were thwarted by security officers, hotel security said.

The group then assembled on the driveway in front of the five-star digs, thumping their pans, blowing the trumpet and hoisting the banner critical of the talks by the Trans-Pacific Partnership nations.

"The criminals are inside," they chanted.

Protesters refused early entreaties by city police officers to move off the hotel property. But they retreated when officers pulled out plastic handcuffs and prepared to arrest them.

"We told them it would happen," police Lt. Mike Ross said, "and that’s when they decided to leave."

The group marched down the driveway and onto the sidewalk.

Salt Lake City Police Chief Chris Burbank showed up at that point and told protesters they needed to stay on the sidewalk to continue their rally without being busted.

Will Munger, of Utah Tar Sands Resistance, said his group wasn’t trying to get arrested. Instead they were raising their voices against what they fear will be a trade pact that encourages the export of methane gas from the United States to other nations.

That would lock in an infrastructure based on fossil fuels instead of the community-based renewal systems that, Munger said, are needed to combat problems such as the Salt Lake Valley’s severe wintertime air pollution.

Chris Davidson, head of security for Grand America, said protesters were not welcome on hotel property but had the right to protest on the sidewalk.

Top trade negotiators from the United States and 11 other nations along the Pacific Ocean began weeklong talks Tuesday at the hotel to try to narrow differences over a free-trade agreement.

The Trans-Pacific Partnership aims to increase trade among the nations to benefit all of them economically. Protesters allege the talks are conducted behind closed door and that drafts of the proposed terms should be made public.