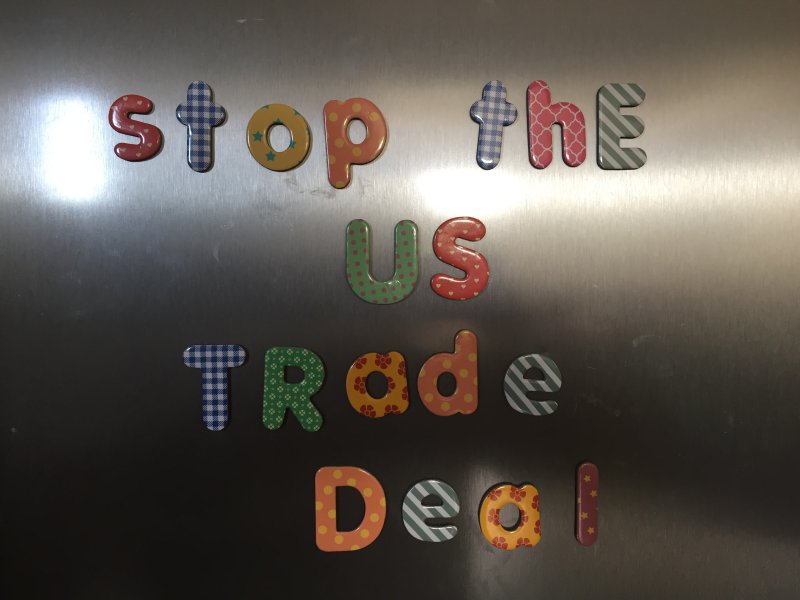 I think there’s a good chance we’ll do something,” Boris Johnson said on Monday, notably less bullish than usual on the subject of a US trade deal with the president-elect, Joe Biden. Johnson grinned awkwardly, like a schoolboy who knows he’s done something incredibly foolish, as he talked down the prospects of an agreement that was once considered the jewel in his Brexit crown.

But while Johnson’s embarrassment might be enjoyable, let’s not pretend this is the last we will hear of the US trade deal. Even if Britain has slipped back in the queue, we could still be lining up for the chlorine chicken slaughterhouse under the likely terms of a deal with the US.

It’s true that Johnson may struggle to form a good relationship with Biden. This goes beyond the fact that Biden sees Johnson as a mini Trump, with backbenches replete with hardliners who sounded like Trumpists last week. But far more important is that Trump had a clear rationale for negotiating a US trade deal. Trump sees everything as a zero-sum game. He believed the US gained only when its “opponents” – China and the EU – lost. For Trump, a US trade deal was a means of weakening EU standards and protections, and of pulling a major economy into the US orbit.

Biden sees things differently. He has no truck with Brexit, and wants to mend fences with Brussels. And he quite rightly thinks his priority should be dealing with the worst pandemic in a century and the serious economic fallout heading his way. Chatting to Johnson about matters of more marginal interest is unlikely to reach the top of Biden’s to-do list. What’s more, his economic strategy for recovery – boosting “buy American” in government procurement, for instance – runs directly counter to Britain’s interests in this deal. The pitifully small gains for Britain’s economy are likely to fall still further.

But all is not lost for Johnson’s attempt at a deregulatory trade deal. Last week the trade secretary, Liz Truss, said that “almost all chapter areas are now in the advanced stages of talks”. Truss will now race to complete the deal, building as much Democrat support as possible before April, when there is a deadline on the president’s power to hurry a trade deal through Congress. After that point, ratification gets much more difficult.

In fact, if Biden’s victory dampens the criticism towards a trade deal here, including on Labour’s frontbench, it could potentially make a toxic US trade deal easier to finalise. After all, who wouldn’t prefer to do a deal with Biden than Trump? But sadly we can’t assume that a Biden deal would be much different. Trade deals are driven by big business interests. The demand that we import chlorinated chicken comes from US agribusiness. The demand that the NHS pay higher charges for medicines comes from the pharmaceutical industry. The demand to drop our digital services tax comes from Silicon Valley’s big tech corporations.

That’s why it was the Obama-Biden administration that pushed the Transatlantic Trade and Investment Partnership, the US-EU trade deal that caused controversy across Europe, and that looked very similar to the US deal currently under discussion. If that deal is really so close to being completed, and should Johnson find a way of preserving the Good Friday agreement, it will be enticing for Biden to just push it over the finish line and satisfy the corporate demands.

The arguments against a US trade deal are not about our overall relationship with the US, or how many goods we trade per se. They’re about exporting a fundamentally different, more market-driven regulatory model into Britain, replacing the standards and protections we’ve developed over many years and entrenching corporate power. That’s what Johnson, Truss and the rest always wanted.

In that sense, the main negotiation over a US deal is still between Johnson and the British public. It is us, not Biden, who need to stop him. Johnson’s failure to put our food standards into law in the agriculture bill means keeping chlorinated chicken out of future trade deals remains a matter of trust, not law. And with Johnson still willing to break international law over a trade deal with the EU, there is no reason to trust mere manifesto pledges.

But there is a big challenge for Biden here, too. Whatever the reality of Trump’s trade policy, he attracted support in the “rust belt” by promising to unwind the free market trade deals negotiated by his Democratic predecessors. It was a popular message. That’s because people have seen the damage done by modern trade deals. Handing over massive new powers to big business while constraining the power of governments to deal with the fallout has created anger, frustration and desperation across former industrial heartlands, in rural areas, and for low-paid workers. While it doesn’t explain all of Trump’s appeal, it’s a factor the left needs to reflect on to keep a future Trump out of office.

Trade is neither good nor bad in and of itself. What matters is the rules under which we trade. The capitulation of the centre-left in the 1990s to a set of trade rules under which the market makes major decisions that govern how our society is run, is largely responsible for the political crisis we find ourselves in. Both Biden in the US and Keir Starmer here need to fundamentally rethink what trade is for and how we should do it. Both will come under significant pressure from big business, so we cannot put our placards away yet.

We need to keep fighting against the threat of a toxic US deal, but as part of a bigger push that demands the transformation of a trade system that currently treats the whole world as a gigantic marketplace, and in which everything we care about – be it food, healthcare, our rights online – are seen as irritating impediments to be stripped away in the interests of global capital.

source: The Guardian
UK US
Subscribe to bilaterals.org weekly