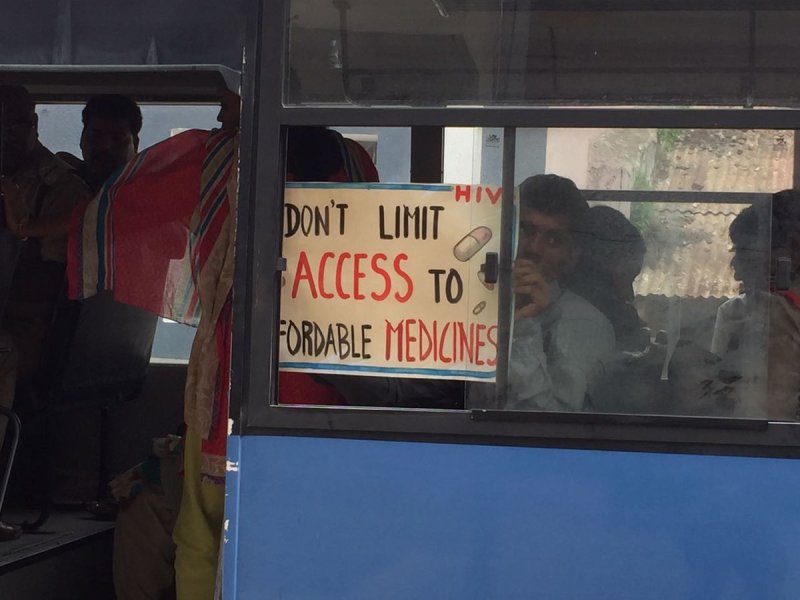 Activists under preventive arrest in Hyderabad for protesting against the #RCEP and its attack on affordable medicines. Photo: Benny Kuruvilla‏ (@bennkuru)

Jakarta: Officials from ASEAN member states and other countries meeting in India this week for negotiations on the Regional Comprehensive Economic Partnership (RCEP) should take steps to ensure that the trade deal safeguards human rights, Southeast Asian lawmakers said today.

ASEAN Parliamentarians for Human Rights (APHR) expressed concerns about proposed components of the deal, and urged negotiators not to rush the talks, calling for broad-based consultation on the text with national parliaments, civil society, and other stakeholders.

“We remain concerned that the RCEP will continue the troubling trend in ASEAN of promoting business interests over the interests of the people, and at the expense of their human rights,” said APHR Chairperson Charles Santiago, a member of the Malaysian Parliament.

“ASEAN’s approach to regional integration thus far has betrayed its claim of being ‘people-centered,’ and a failure to stand up for the interests of the broader public in the context of RCEP negotiations would reinforce the message that ASEAN governments care only about profits, not people. ASEAN leaders should therefore stand up for the rights of their citizens during these negotiations and ensure that this deal does not undermine critical social protections or entrench already widening inequalities.”

The 19th round of negotiations over the proposed 16-nation trade pact begin today in Hyderabad, India. Nearly 700 officials have gathered from the ten ASEAN-member states, plus Australia, China, India, Japan, New Zealand, and South Korea, to continue hashing out specifics of the agreement, following the last round of negotiations, which concluded in Manila in May. The proposed deal would include nearly half the world’s population and over a third of the world’s GDP, and would cover the flow goods and services, as well as investments and intellectual property rights, among other areas.

The details of negotiations and draft chapters of the deal remain secret, highlighting a disturbing lack of transparency, APHR said. However, leaks have provided the public with access to some critical components, many of which elicited concerns among regional lawmakers.

MPs expressed particular alarm over proposals to include investor-state dispute settlement (ISDS) mechanisms in the agreement, which, they argued, could lead to rulings that violate rights and harm the environment. ISDS mechanisms, which provide a venue for corporations to sue governments for implementing public interest policies that impact – or may impact – profits, have become an increasingly common feature of bilateral and multilateral trade deals and have been used with growing frequency by corporations across the globe in recent years. In the past, ISDS mechanisms have handed down rulings striking down consumer protections and environmental safeguards, which have undermined the public’s right to health and a clean environment.

“By setting up a parallel legal system for companies, ISDS is an affront to public accountability and the principles of democratic governance. All around the world, ISDS rulings have subverted attempts at providing greater protections for the public in the areas of health, the environment, indigenous rights, and more, favoring companies’ profits over people,” Santiago said.

“Worst of all, these mechanisms only benefit corporations and are inaccessible to citizens. Meanwhile, we still lack much-needed tools for individuals and communities to seek redress if they have their human rights violated by investment projects or other actions by corporations.”

The intellectual property rights (IPR) provisions outlined in leaked draft chapters of the RCEP are a source for additional concern, parliamentarians warned.

“By extending patents on drugs, the IPR provisions in the draft agreement could restrict access to affordable medicines to residents in ASEAN countries and across Asia, undermining their right to affordable, quality health care. It is imperative that negotiators abide by their international commitments and not violate their citizens’ right to health,” Santiago said.

Parliamentarians also called for all countries to conduct their own human rights impact assessments before ratifying any agreement that comes out of these negotiations.

“It’s important that countries really understand the implications of what they’re signing up for with this deal,” said APHR Member and Indonesian MP Mercy Barends. “Human rights impact assessments should be a prerequisite for any trade deal to make sure governments aren’t hurting the people that they are supposed to be representing.”

With less than six months left before a tentative deadline for finalizing the agreement at the end of 2017, APHR members reiterated their calls for governments to guarantee that the provisions of the RCEP do not adversely affect the enjoyment of human rights for all members of the ASEAN community.