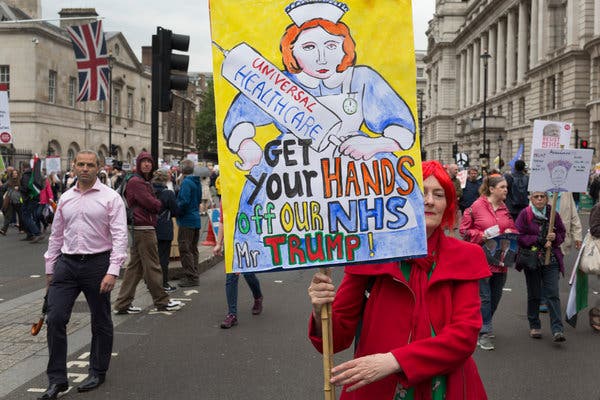 This is part 2 of a 2 part interview with political analyst Tim Coles. Part 1 focuses on the historical context and harsh reality of Free Trade Agreements (FTAs).

In his new book Privatized Planet: Free Trade as a Weapon Against Democracy, Healthcare and the Environment, political analyst Tim Coles examines how so-called Free Trade Agreements (FTAs) harm society at large while benefiting large corporations. The book comes at a crucial moment, as a hard-right UK government looks set to crash out of the EU without a deal – likely turning the UK economy into a firesale for large corporations.

Coles spoke to The Canary about the endangered future of the National Health Service (NHS) under Boris Johnson’s new Conservative cabinet. “A ‘free trade’ deal led by this clown and his cabinet of reactionaries”, Coles said, “will be a nightmare”.

On 4 June, US president Donald Trump stood next to outgoing-PM Theresa May and insisted the NHS would be “on the table” in any trade deal. His comments came just days after US ambassador Woody Johnson had said: “the entire [UK] economy… would be on the table”. Although Trump would backtrack on his words the next day, few will find solace in pledges from a man famed for his dishonesty.

The Canary asked Coles whether US interest in portioning out the NHS to US corporations was a new thing, or if the threat had been circling for some time. He responded:

“A few years ago, the US Chamber of Commerce published a report entitled, ‘Selling Splints to Europe’.They certainly see European health systems, including Britain’s, as a major market. The trouble is that pesky ideas like national sovereignty get in the way. Government control over healthcare is seen by US corporations as a barrier to access. This ‘barrier’ exists thanks to public pressure…

As a result, European governments are resistant to the overt Americanisation–which means US privatisation–of their healthcare systems. This is helped by the fact that the US system, which was slightly improved under Obama’s healthcare model, though not nearly enough, is hopelessly inefficient for patients but profitable for US corporations.”

Coles continued by discussing the main threats that US privatisation of the NHS might pose:

“ The biggest US foot in the NHS door appears to be with packaged medicaments and technology. The US pharmaceutical industry is subsidised by the US government, especially through tax breaks, price distortions and research and development. Their health and safety, such as clinical trials, leaves a lot to be desired, so it’s likely that any US-UK ‘free trade’ deal will push for the elimination of safety regulations.”

He went on to say:

“ Next, there’s hi-tech. Part of the Tory and, during their coalition (2010-15), Liberal Democrat, effort to undermine the NHS is to make it highly bureaucratic, so that nurses and doctors perform clerical duties in addition to patient care. This makes the system function poorly, thereby offering pretexts for privatisation.

Hi-tech, such as nurses using Apple iPads, further enables this bureaucratisation. The NHS uses Windows programmes and IBM computers; all US companies. Worse still is patient data exploitation. Googles’ DeepMind, and other projects, are supposedly there to make healthcare more efficient by targeting patient data. But the UK’s Information Commissioner raised privacy issues concerning these technologies. Although we don’t have access to the proposed US-UK ‘free trade’ deal, failed predecessors like the Transatlantic Trade and Investment Partnership and the Trade in Services Agreement—both of which were leaked, the former by Greenpeace, the latter by WikiLeaks—include legislation to undermine, privatise and deregulate patient data.”

Coles then spoke about the dangers associated with private health insurance. The Canary recently reported on the astronomical costs of insurance in the US, which bankrupt poor families across the country. Coles continued:

“ US insurers and asset managers see the NHS as a multibillion dollar insurance market. The big patient data collected, analysed and shared via hi-tech software has the very real potential to be sold to private insurers who, in order to maximise profits, could increase prices based on minor customer ailments. For example, already in the US there are cases of insurance companies cancelling policies or putting prices up because, for instance, a customer who was diagnosed with cancer was penalised by insurance investigators for having an undeclared acne problem. It’s monstrous. In addition, American GPs say they’re pressured by insurance companies to diagnose and/or prescribe based on the patient’s ability to pay. Imagine that system brought here. See Theresa May’s face when Trump let the cat out of the bag on NHS privatisation.”

The UK is now led by an unelected prime minister, pushing a Brexit agenda supported by a minority of the population, which would most likely work against the interests of the general public. The Canary asked Coles how this situation was incompatible with ‘democracy’, and what it might mean for the NHS. He responded:

“ The entire Brexit issue has stripped the illusory veneer of British ‘democracy’ for all to see. First of all, 17.4 million people voted for Brexit. But there are 47 million eligible voters in the UK. That means that 29.6 million Britons did not vote for Brexit. Yet we keep hearing ‘it’s the will of the people’. The Tory Prime Minister who caused this mess, David Cameron, was replaced by an unelected PM, Theresa May. May lost her majority in 2017, i.e., she was never elected PM by the public, yet she refused to resign or hold another general election. Instead, she bribed a hard-right provincial party, Northern Ireland’s DUP, to prop up her unworkable government. The Tories won with 43 percent of the vote share. Our undemocratic Parliamentary system means that although Labour was only 3 percent behind in the vote share, the Tories got several dozen more seats than Labour.”

“ Johnson has an appalling voting record on everything from immigration to social welfare. He is blatantly racist, again in my opinion, and given his wealthy background cannot relate to the struggles of ordinary, working people. He’s used his executive power to appoint, as you say, an unusually hard-right cabinet. As Brexit is now a religion, it doesn’t matter to Johnson’s supporters that much of what he says—the Kipper and the ice pillow, the million-to-one chance of a no deal, etc.—is a lie. A ‘free trade’ deal led by this clown and his cabinet of reactionaries will be a nightmare.”

The only positive thing about Johnson, Coles said:

“ is that–being a spoiled man-child used to having everything his way and taking responsibility for nothing–he is genuinely unreliable. At some point, he will stumble into a serious gaffe that will jeopardise his position as PM. His inability to take anything seriously is also an advantage to his opponents. During a general election campaign, which we hope will come soon, Jeremy Corbyn will be able to win over swing voters by presenting serious policies that matter to people: national and regional investment, more power to local authorities without austerity, a living wage, rent controls, renationalisation… Assuming that Corbyn’s true to his word (his track-record suggests that he will be) and that he gets enough of a majority to get these plans through Parliament, a much better society will dawn.”

Coles’ words are a scolding indictment of a government that looks poised to wildly overstep its mandate by auctioning off cherished public goods to the highest bidder. His book details how opaque trade agreements facilitate this process and provides a point of reference for resistance in the process.