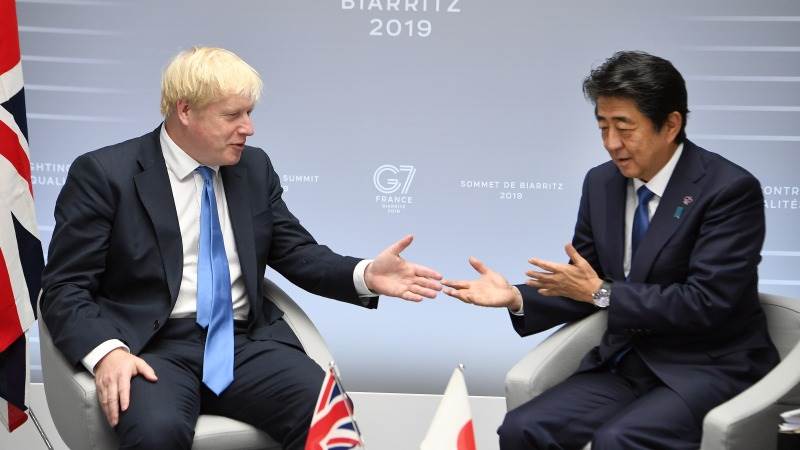 Cabinet ministers have agreed to pursue an agreement with Tokyo at lightning speed, The Sun can reveal, with hopes rising among nation’s leaders that it could be wrapped up in the Autumn.

Having initially been cold about Brexit, Whitehall sources say the Japanese government have undergone a significant change of heart.

Prime Minister Shinzo Abe’s aides have told No10 he wants a deal as soon as possible, with insider saying it will break new ground on the digital and financial services sectors.

Insiders have dubbed it ‘EU Plus Plus’, as it goes further that the EU’s recent deal with Japan.

The PM is keen to strike the Japan agreement ahead of one with the EU and the US in a demonstration to both how swiftly Brexit Britain can move.

The Cabinet’s high powered EU Exit Strategy (XS) Committee met in No10 to thrash out key details of Britain’s trade negotiations plan for 2020, including ‘most favoured nation’ tariffs.

A senior Whitehall source said: “The PM is very keen on the Japan deal now, and think we can use it as a bit of a trailblazer.

“It will really help to show Brussels as well as the rest of the world we’re ready to go.”

Chaired by the PM, the committee of the Cabinet’s most senior ministers also agreed to prioritise four countries in total for early trade deals – known as Tier One - as well as the EU.

They are Japan, the US, Australia and New Zealand, and negotiaions on all are expected to begin by the Spring.

Other countries where deals are expected to take longer have been bracketed as Tier Two, and include Canada.

The XS committee meets again next Thursday to thrash out tricky details of the negotiations, such as how flexible the UK is prepared to be on agricultural products.

The revelation comes as the Queen gave royal assent to the landmark Withdrawal Agreement Bill.

That means Britain will leave the EU with a Brussels deal in place in a week, once MEPs also ratify it next Wednesday.

Under the rules of the 11 month long Brexit transition period, Britain can negotiate and sign new trade deals but not implement them.

International Trade Secretary Liz Truss ensured MPs that her ministry was fully staffed and ready to start work on the deals.

Ms Truss told the Commons: “We have scaled up our trade negotiation expertise.

“We now have approximately the same number as the US trade representative, which is one of the leading trade negotiators in the world”.

But another senior US politician pressed Britain to negotiate a trade deal with America before the European Union.

President Trump’s Commerce Secretary Wilbur Ross said an agreement with Washington “should be much easier to do mechanically” than with Brussels.