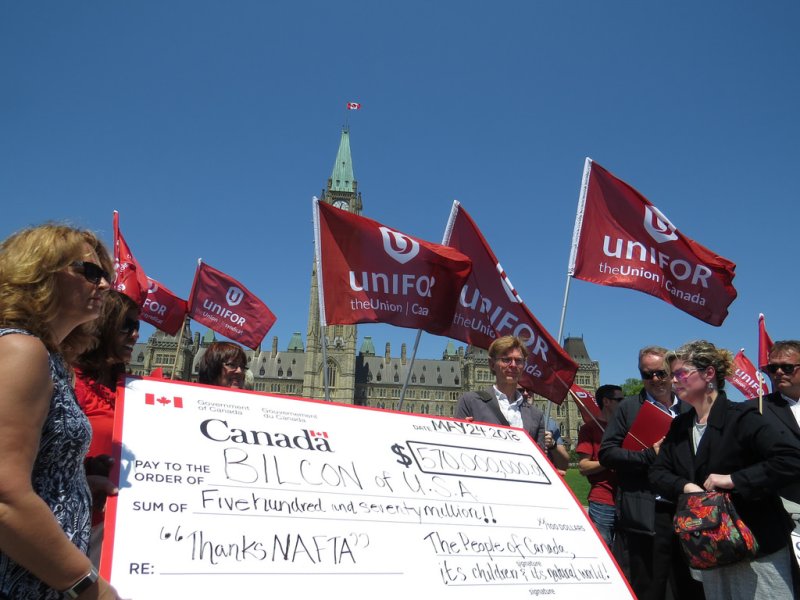 Canada has been ordered to pay $7 million in damages, plus interest, to a U.S. concrete company that used the North American Free Trade Agreement (NAFTA) to successfully argue it was wrongly denied permission to build a quarry in Nova Scotia.

The award falls far short of the $443 million in compensation the concrete company, Bilcon, was seeking.

Arbitrators released details about the award in the long-running case Monday.

Global Affairs Canada said it welcomed the arbitrator’s decision to "only award Bilcon a minimal portion of the damages it sought."

"We are glad that the tribunal took into account Canada’s submissions on this matter. Canada is assessing the damages award," spokesperson John Babcock said in a statement to CBC News.

"In the new NAFTA, we worked hard to remove the investor state dispute resolution system that companies like Bilcon have used to sue Canada. By removing this, we have strengthened the Canadian government’s right to regulate in the public interest."

The dispute stemmed from a joint federal and provincial review panel recommendation in 2007 to reject an application by Bilcon to open a basalt quarry and marine terminal in Digby Neck, N.S.

The joint review panel said the proposed quarry compromised "community core values" — a vague criteria never actually raised at the panel hearing. Bilcon said it never had a chance to address that criteria.

Bilcon, which is owned by the Clayton Group of Companies in New Jersey, said as a result it was blindsided by the joint review panel. In 2008, it appealed using Chapter 11 investor protections in NAFTA.

By a two-to-one vote, a Permanent Court of Arbitration tribunal ruled in 2015 that Canada’s environmental assessment was unfair to Bilcon.

The tribunal said the joint review panel did not properly assess the environmental effects of the proposed quarry and wrongly ignored mitigation measures.

Bilcon claimed it was entitled to recover lost profits over a 50-year lifespan of the quarry.

That claim was unanimously rejected by the arbitration tribunal in its awards decision dated Jan. 10, 2019.

The tribunal said Bilcon was entitled to "opportunity lost" in pursuing the investment in Nova Scotia until it had become apparent in late 2007 that the government’s denial of the environmental assessment approval would not be reversed.

While the joint review panel process may have been flawed, the tribunal said there was no guarantee the quarry would have been approved had the review been done in a way that was compliant with NAFTA.

"The tribunal’s analysis of the investors’ lost profits claim ends here, as without a high degree of certainty as to regulatory approval, it goes without saying that no damages based on the profitable operation of the quarry can be awarded," the tribunal wrote.

Environmentalists claimed the Bilcon case would throw a chill over Canada’s ability to enforce its own environmental standards.

"They don’t deserve a single one of those dollars. Their project was rejected fair and square under our environmental assessment laws," said Gretchen Fitzgerald of the Sierra Club of Canada.

"They were using it as a bit of a billy club I think to kind of create this regulatory chill and [show] how hard done by [they were by] the Canadian government," Fitzgerald said.

"It’s a sad state when we’re grateful we’re paying a company that lost its argument to build this quarry."

"The case is still before the tribunal and we do not have any comment on the award at this time," he said in an e-mail to CBC News.